In the Domain of the Temporal Being: An Interview with Brett Meredith

South African photographer Brett Meredith fuses together his fascination for technology with a keen eye for the human form, while a robust philosophical outlook underpins all of his work. A recent graduate from Fotoacademie Amsterdam, Meredith created In the Domain of the Temporal Being - a series of photos that highlights the dystopian features of current society, yet argues for the potential of art as a liberating factor. He spoke to us in this interview about getting inspired by everyday textures he finds, using anonymity to stand in for the loss of individuality and his view on the complexity of mankind.

In your project, ‘In the Domain of the Temporal Being’ there seems to be a clear political dimension that serves as an inspiration for your photography. How does this work for you?

It all starts with a philosophical concept. At the moment in my work I’m really hung up on the idea of man as a biological being caught up in a digital framework. A good example is my work Probe, part of my larger project In the Domain of the Temporal Being. It is one of my key works for me. It communicates a feeling of fear and threat of the unknown masses. The anonymous male figures in Probe are both primitive and synthetic; natural but manufactured. This kind of imagery pervades most of my work and represents my fascination with the idea of man as a natural, biological being in an increasingly digital world.

In Probe in particular, digital media has become our window through which we experience the world, and it has also become the way that we experience other people. If you are constantly confronted with images of war, of images of the refugee crisis and so on, it comes very close to you. You have constant access to this information about what is happening around you in the world. And at the same time there is something artificial about it. You are removed from it, but you come very close to it. I think that there is a danger there too that in this way our image of other people, of the masses out there, can become corrupted. This phenomenon has a huge impact on human existence, one in which man moves further and further away from the natural world towards a synthetic reality.

It strikes me as odd that you, on the one hand, highlight the dangers of technology, while you use every means of digital technology available to create your own pictures. Would this be a danger, or a possibility of a resolution instead?

I think that’s a good question. There’s a duality in that. For me, I have a fascination for digital technology, but there is a kind of fear in me too for what it might bring. It is true, what I make relies completely on digital technology.

Tell us how you create your images.

It depends on the image I’m creating. I photograph a lot of things daily. When I come across something that has a certain texture, that has a certain feel that causes an emotional reaction in me, I usually end up photographing it. I’ll give you an example, for my work Synthesize I photographed the inside of my dryer. This picture is about conformity. It is about the relationship between me as an individual and the group. It’s about the way we conform. We like to be individuals, but at the same time we conform to society and what society expects of us. Which is I think a very primitive primal drive in us, we’re social creatures. That's a way for us to survive. 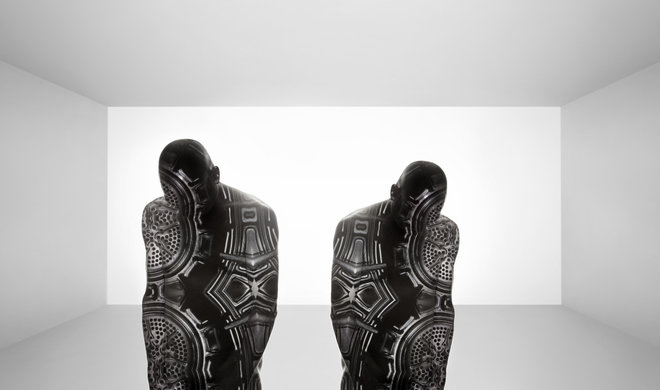 After I photograph the texture, then I do all kinds of tests on my computer, I have a lot of portrait shots of my different models. I will see how the textures interact with the human form, and then I will have a studio shoot where I project something onto the model and photograph them. Either that becomes the picture, or if I need to have a background, then I will shoot the model against that background or I will photograph it individually. Then I put it all together with digital techniques; mainly Photoshop.

You always anonymise the models in your photography: we don’t see their faces, you take away all their personal characteristics and you strip away their individuality. Why?

I think this represents a danger that we face today. Because of digital technology and other factors in politics and the economisation of societies, it becomes easier to see man as an object. As an anonymous entity that is, in a way, objectified by the system that we find ourselves in. The world that I show in my pictures is exactly that kind of world that I wouldn't want to see. It is very important to keep in mind that humans are individuals, not to lose sight of the fact that we are human, not another number or a statistic or an object. So, I think what I show in my work is, in a particular way, the opposite of what I would ideally like to see in the world.

You come from South Africa, which has been, or still is, one of the most racially segregated countries in the world. How does this influence your work?

I think it influences me a lot. I think this is one of the reasons why I became fascinated with projections. A lot of what you see in the artwork is made by projecting certain patterns on the human body. I became interested in that because by altering human skin, or the appearance of someone, you can play with, or change, the way that people react to it – the appearance of the human body. One day I was projecting onto one of my models in the studio, and I saw a transformation. And I thought that this would be an interesting way of changing the human form and the way a human being is perceived. To see how these changes affect the way that we see one another.

Your images make it even more difficult to know the skin colour of a person. Are you intentionally trying to photograph your models in a way that transcends race?

Yes, I do that consciously. I take man - or an element of man - and I present him out of his usual context, so there’s no way to recognise him based on his demographic or cultural background. I like to take that away sometimes, or I like to play with it. For example, I have taken white models, and used dark projections on them, which made their skin black, and sometimes I do the opposite. So, I aim to take man away from his usual racial demographic context. I want the viewer to have a look at it, and see my work, and not see a specific race or a specific culture, but rather, to experience it as mankind in general. 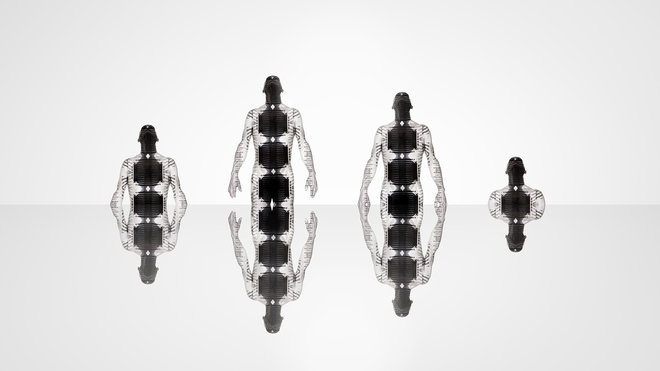 Then, why are your subjects all men? If you want to be universal about it … Is this a conscious choice?

Yes, it is a conscious choice. I think my work is about mankind. For me I don’t see my subjects as men and women, male or female. I see them as an embodiment of humanity. I don’t see them as individuals.

There is no gender involved in your pictures?

No, I don’t see it anyway. I have used female models in the past, and i noticed too that I treated them differently.

I did a couple of fashion series with projections on naked women. I have much more the inclination to want to make women beautiful. 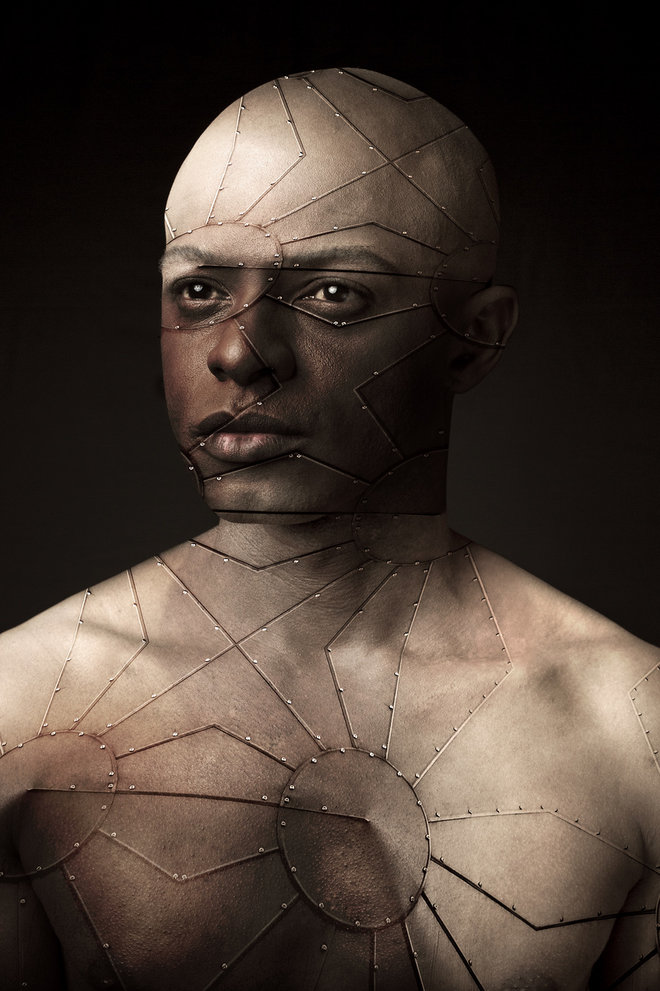 You said you tend to work with the same models. Why is that, do you need familiarity?

Yes, that helps. But I also use the body as a kind of canvas. It is an intimate process where I get to know their bodies. Every model I photograph is naked, so that’s also something that models have to get over. But when they know what it is you do and what you are trying to achieve, that builds an easier relationship. Also for me to know someone’s body - I know the shape of the head, I know the shape of the body - it’s easier for me to visualise what kind of things would work as a projection, and what kind of things would work less well. Skin colours also affect the outcome - if you think of a canvas, a painting, different canvasses react differently. I know my models, I know their skin. I know what could work as a projection and what would work less well. 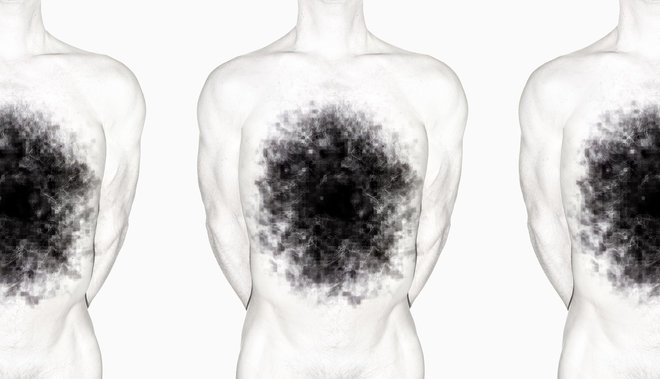 On the one hand, you say you want to present a dystopia, a place you would not like to see, but on the other hand, you try to take away all features of prejudice - like skin colour - that comes with seeing a person for the first time. Perhaps that also gives the pictures a sense of hope.

Yes, I play with creating something that looks – I wouldn't say idyllic, I don’t know if you can consider these pictures as utopian, but rather, something that questions whether the world I create is a utopia or a dystopia. That causes a tension which is interesting. This is the same with digital technology. I’m fascinated by digital technology, as you said, I use it in every photo, but at the same time it is something that can be used in a negative way. Human beings are complex. They are beautiful, they are dangerous. I think to just show them in one way or another way, would be unfair to our species. I think to present them as something more complex is only fair.