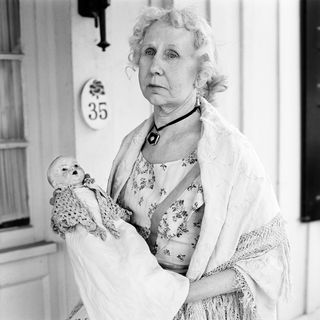 Got To Go, a new photobook from Rosalind Fox Solomon (1930, USA), is an assembly of photographs shot from the early 1970s through the 1990s. Poetic texts accompany the selection of 79 images from Fox Solomon’s back catalogue of punchy journalistic yet humanistic photographs depicting survival and struggle, combining to create a surreal tragicomedy that observes the arc of life.

Beginning with portraits of older women, a text passage laments the absurd frailties of aging and mortality. The texts accompanying Fox Solomon’s three-decade spread of photographs go on to provide narrative structure to the chronologically randomized images. Written mostly from a daughter’s perspective, the texts are fragmented recollections of childhood memories and passing utterances from the artist’s mother. The seemingly innocuous quotes, combined with immediate, unflinching images of strangers, create an unnerving humorous effect.

In an exemplary two-page spread, the text with the left image reads “mother says, SMILE, YOUR FACE WON’T CRACK” underscoring a photograph of a poker-faced black girl mid-parade, sporting a Statue of Liberty novelty headband, staring back at us through large sunglasses. Juxtaposed on the facing page, a young white county pageant winner bejewelled in a tiara is enjoying a celebratory donut, with the accompanying text, “mother says WIPE THAT SMILE OFF YOUR FACE”. 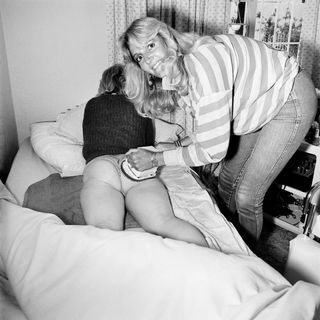 In Got To Go, Rosalind Fox Solomon’s images examine the rituals and struggles of the life of a woman, told with eerie humour. Using aged photographs, of long-past moments of her subjects, she explores memory in a way that is neither sentimental nor nostalgic. The book closes with an epigraph in the form of a quote from Kurt Vonnegut, reminding us that the personal story we’ve been told is ultimately universal: “All persons living and dead are purely coincidental, and should not be construed.”

Got To Go is available from MACK. It will be on exhibit, with photographs and multimedia installation, at Bruce Silverstein Gallery in New York, from February 25 – April 16, 2016.