Revelations: Experiments in Photography is a book published in tandem with an exhibition of the same name held at the Media Space Gallery in London’s Science Museum from March 20 to September 13, 2015. Rather than serving as an exhibition catalogue of the images on display, the book is more accurately a series of comprehensive essays of how scientific photography has influenced modern art and continues to influence contemporary art.

Revelations developed from the idea of photography’s ability to give form to the intangible. The photographs contained within Revelations are absolutely fascinating in details, showing us works that are astronomically distant and microscopically small. The scope of work explored in Revelations spans from the 19th century pioneering experiments by William Henry Fox Talbot, through strobed tool tossing by Bernice Abbott, to contemporary photographs such as the exploding potpourri of frozen flowers by Ori Gerst and gun barrel ejections by Sarah Pickering. 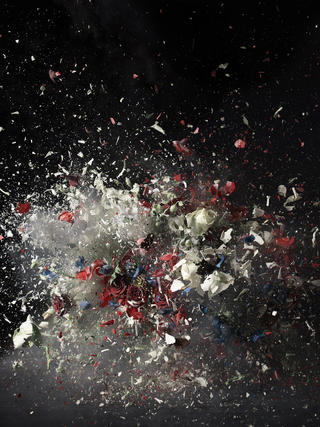 The book is constructed like a small, dense textbook: authoritative and solid. As Revelations is a compendium of analytical essays, the photographic plates serve to illustrate and support their insights. Each essay is thoroughly researched, as one would expect of a major museum exposition, and illuminates scientific photography’s significance and effect in multiple contexts. The five major sections of the book cover research aesthetics, showing science photography, the art of photo micrography, influences on modern art and bringing it up to the present, a scientific turn in contemporary photographic art. The depth of references encourages the inquisitive reader to dig deeper.

While the academic text may limit wide appeal of the book, the images and experiments found in Revelations hold more universal interest. Surely fascinating is how scientific phenomena can be captured and represented through the use of high-speed photography, strobe, photomicrography, deep space imaging and solargrams. By showing us what the artist can reveal that which cannot be seen except through a camera, Revelations challenges us to take pause, look closer and examine the world further through our lenses.