Though Rinko Kawauchi uses photography, it might be more accurate to say that her medium is the photo book, having achieved renown through her multitudinous monographs. Her latest book is Ametsuchi, the title derived from the two Japanese characters meaning 'heaven and earth', a series of forty colour images portraying seemingly disconnected scenes of crop burning, fields full of tourists, washed out scenes of religious ceremonies and even the night sky. Yet, as Kawauchi writes in the book's conclusion, “there is an invisible point of tangency between apparently unrelated things." 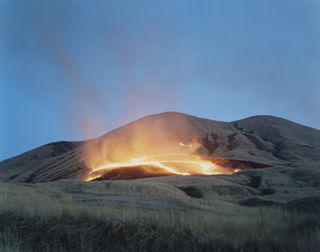 Kawauchi explains that the project began with her visit to a town called Aso in southern Japan, a place where the tradition of controlled crop burning (called 'yakihata') has existed for 1300 years and continues to this day. In witnessing the flames, she began to feel the connectedness of time and space – both in nature and in ceremony. Through the field burning, she says, “human ritual has sustained a beautiful meadow, which cattle graze on, and people in turn receive a bounty from the cattle—an interconnected chain." It's this sense of sublime relatedness that informs the viewing of Ametsuchi, that has the reader's gaze alternating between heaven and earth, the mundane and the transcendent.

As usual, there is a kind of child-like naiveté that characterises Kawauchi's photographs, a simple wonder found in colours, shapes and light: A small bug sits atop a blue flower, fire curves along a mountain spine, and long luscious grass rolls along a hilltop. Yet, when combined with images of pilgrims at the Western Wall in Jerusalem, with repeated scenes of landscapes on fire, Kawauchi expresses a more complex narrative, one which requires a certain amount of cultural context and reflection. 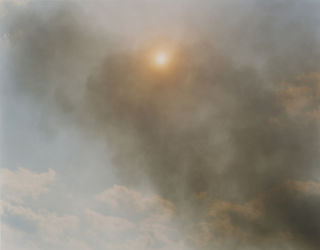 The book itself also plays with the concept of complements, opposites that combine to form a whole. The book is bound with the tops of the pages folded rather than cut apart, so each page turn is actually two leafs of paper, held together by the top fold. Partially visible within these in-between spaces are the photos printed in negative – yellow fire turns ice blue on the opposite side of the page, a black starlit sky turns a spotted white. These positives and negatives combine to offer an image of the 'everything' – all things in heaven and earth. Even the book's cover unfolds to a poster-size blow up of the landscape on fire, colours inverted on the verso.

Viewing Ametsuchi asks a leap of faith, a suspension of the tendency to take things literally. Like much of Kawauchi's work, it is to be viewed emotionally, rather than intellectually. With one's intuition, rather than calculation. In turning these pages, one's openness to her particular way of storytelling may determine the pleasure, but for those who can connect to it, there is redemption found in the dialogue of mysteries of existence, large and small. 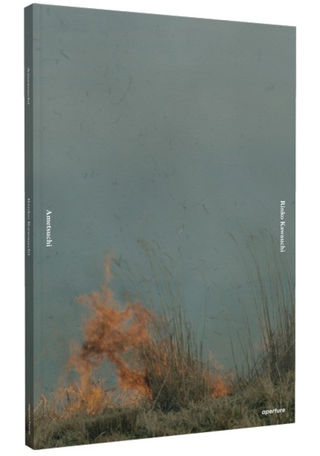 Ametsuchi is available for sale from Aperture.