The Silence of Dogs in Cars

British photographer Martin Usborne worked on his exceptional series of dog portraits for over three years, and with The Silence of Dogs in Cars he created a heart-rending photo book that plays with our notions of loneliness and expectation alike. On 52 colour plates of cinematic quality, Usborne presents staged images of dogs locked inside vehicles, anxiously waiting for their owners to return. Longing, whining, resigning - they are staring into the dead of the night and we cannot help but enter into a sort of emotional symbiosis with the lost beastly souls.

Usborne's idea stems from the traumatic childhood experience of being left alone in the car while his parents went to the supermarket. “The fear I felt was strong: in a child's mind it's possible to stay alone forever". The photographer manages to communicate this primal fear through the big, sad eyes of the dogs he portrays and the ways in which he chooses to do so. We see huskies, pit bulls and golden retrievers behind the breath-clouded windows of muddy land rovers, streamlined sports cars and worn down family vehicles. From misty forest paths to empty parking lots, the deserted locations reflect the heartfelt absence. One can almost hear the nervous panting of the dogs, pressing their noses against the windows while the rain drums on the roof of the car.

The feeling of claustrophobia and muteness intensifies with the repetitive pattern of the book. We might feel a rather direct reaction of empathy towards the dogs at first, but what is more remarkable is the arousal of more universal emotions. We all fear isolation and loneliness, we are all dependent on the care of our loved ones and we are vulnerable in the moment that we are longing for their presence, humans and other animals alike. “The dog in the car is a metaphor, not just for the way that animals are so often silenced and controlled by humans, but for the way that we so often silence and control the darker parts of ourselves: the fear and loneliness that we would rather keep locked away". But, despite the rather gritty atmosphere, there is a subtle humour inherent in the series, as well as a hopeful undercurrent that is revealed as you come to learn the whole story .

The strength of the images namely relies on the meticulous staging of the scenes and the aesthetic means applied to reinforce the emotional impact. Usborne shot the dog portraits in studio conditions and never in broad daylight, the use of dramatic lighting and contrast contributing to the cinematic quality of the images. The combinations of vehicles and their canine passengers have been carefully chosen as the cars serve as projection of the dogs' characters, causing for a subtle interplay between the two. The dogs are unwitting actors in these scenes but, as they don't know how to act, the resulting portraits are genuinely honest. Usborne deliberately included reflections in the windows, wet leaves or windscreen wipers into his careful compositions, augmenting the realistic feel of his mises-en-scènes.

With grey fabric on the book's back cover and embossed gold letters on the front, the classic appearance of the book gives centre stage to the gloomy scenarios. The mention of each dog's name next to his portrait naturally heightens the emotional bond we feel with the animals. “The emotional impact is paramount", says Usborne, and: “The question I ask myself after taking an image is not: Does this look good? But rather: Does this feel right?" This is exactly where he tries to raise our awareness as viewers, provoking our sensitivity towards the suffering of animals through humans. And it is not merely empty (visual) rhetoric he's using here, Usborne is currently spending a year to see how many animals he can save in 365 days. If you're equally infected with the four-legged creatures -- and how could you not be after flicking through this heart-warming collection of big, sad eyes -- stay updated on Usborne's projects here.

The Silence of Dogs in Cars is available from Kehrer. 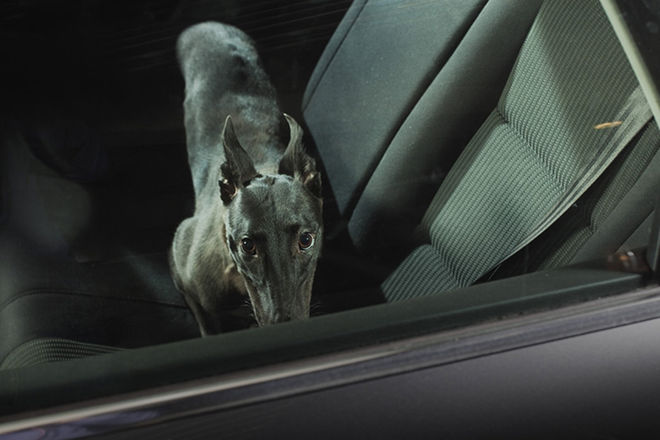 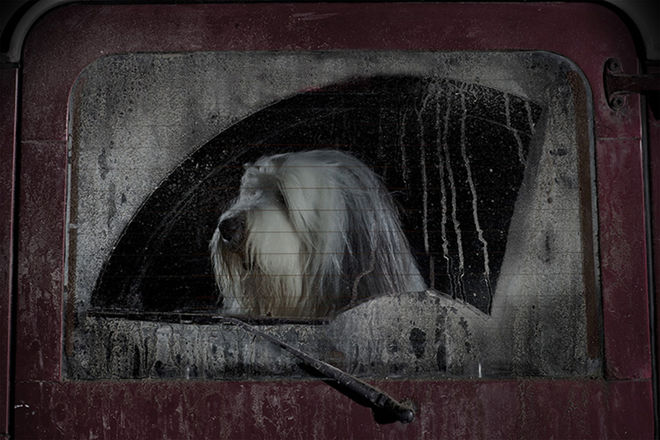 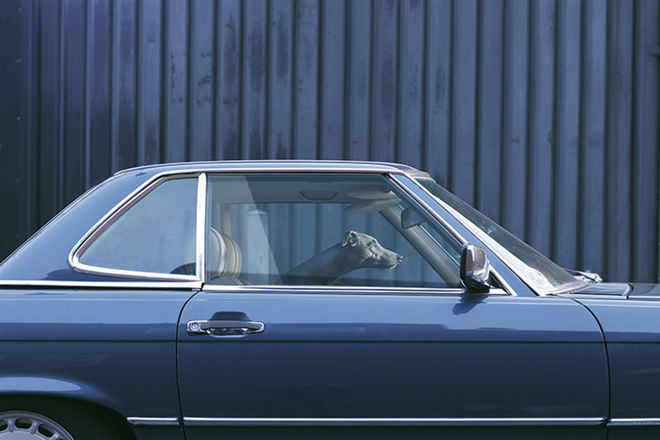 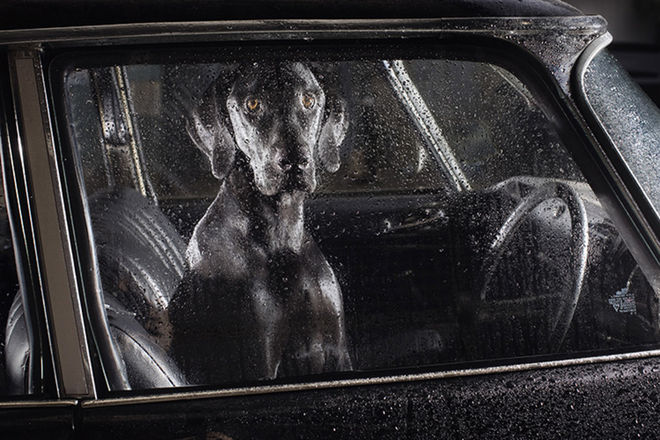