Fire Is My Favourite Color

In her photobook Fire Is My Favourite Color, Polish photographer Marta Zdulska (b.1984) gives us a glimpse into her tumultuous everyday life. Like the cut flowers at the front cover, Zdulska is feeling lost and taken from her roots but willing to survive anywhere else.

Zdulska’s unconventional documentary photographs of tattooed men and women, vases of flowers, piles of junk, a lovely -but bruised- granny and some explicit images of nudity are placed incoherently, generating the artist’s mixed emotions that twist and turn in the blink of an eye. “So many of them are like a diary of my emotional states and I evoke those states when I look at a certain photo,” Zdulska says. “It’s about relationship[s] with people and being a bit lost between white and black, east and west, and the question: where are you from?” 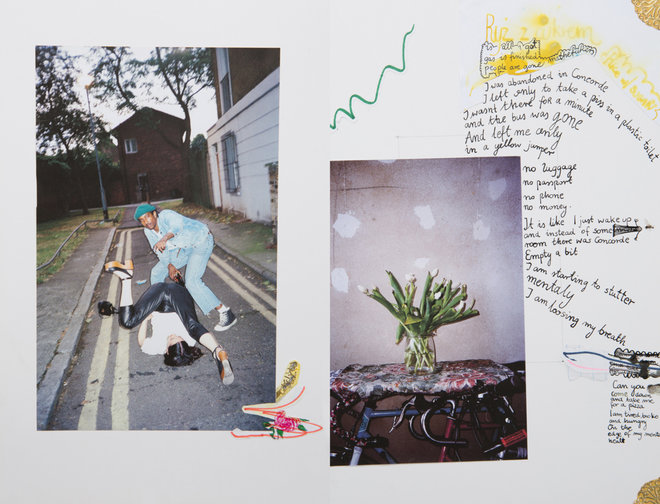 Using a hard flash and awkward angles in most images, she exposes the imperfections of her subjects and isolates them from their context: perhaps to emphasize the fact that none of their stories are the same. Zdulska is there too, posing in mirrors and placing herself in front of the camera, not as an ‘identity claim’ but to pursue a curious understanding of the self. Her rebellious sense of freedom can also be seen in the ever-shifting lay out: Full bleed, small polaroids, double spreads, doodles and handwritten anecdotes are all mixed up, resulting in a chaotic sense of disorientation. This is surely a reflection of what Zdulska must have felt when her apartment caught fire, as the publisher clarifies. This event turned her life upside down, after which she decided to live without material possessions and started spending her time on other people’s sofas.

Fire Is My Favourite Color feels brutally honest; everything is caught in the moment and comes as it is. In a way, Zdulska captures today’s zeitgeist perfectly, with the idea that when you feel your roots penetrate the earth, you better shake it off and keep on going. Yet, the increasing sense of confusion that comes along with it makes you wonder about the downside of living like a nomad. Striking out on uncharted paths can get you lost and make you question yourself: where am I from?
Related