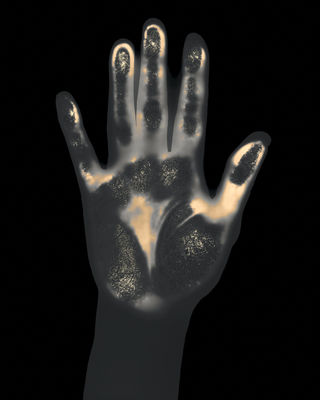 “I consider these portraits to be as expressive as any of a face,” New York-based photographer Gary Schneider (b. 1954, South Africa) says of his handprint-based photographs. “They’re more private, and possibly more revealing.” He has been making the handprints, in which each subject co-creates the physical object directly on film emulsion, for over twenty years. The uniqueness of each physicality gives an emotional impression of each sitter’s personhood, while rendering other aspects, like race, gender and age, more irrelevant. Each hand is both generically recognisable and characteristically distinct – a synecdoche representing our larger selves.

HandBook was first produced as a signed and numbered limited edition by Aperture in 2010, with handprint-portraits Schneider produced from 1996-2010. Schneider then continued the work from 2011 – 2013, with handprints of artists from his native South Africa. A selection of this work was published as a book by Johannesburg publisher Fourthwall Books in 2015.

HandBook was featured in GUP#55, the Wonder issue.