Renowned Dutch photographer and filmmaker Anton Corbijn has worked with some of the biggest names in music and Hollywood, creating a slew of monographs in the meantime. His latest book, Waits/Corbijn '77-'11, brings together images from a long-term collaboration with friend and musician Tom Waits. Including 145 images that Corbijn has taken of Waits over a period of 35 years, as well as some fifty pages of images and writings from Waits himself, the book is an homage to the spirit of their co-creation, honouring their respective iconic identities and illustrating their artistic dialogue.

The book opens with some of Corbijn's photographs of Waits from Amsterdam in 1977. And then 1978 in Los Angeles, where Waits lived at the time. Already the Corbijn aesthetic is at work: broody black and white images. Rough and romantic, a bit like Waits' music. Flipping through the photos, watching decades go by, the muse-photographer relationship is comfortable, a confident interaction between equals. Waits sometimes looks directly at Corbijn, facing off or showing off -- jumping in the air, taking off his hat, posing austerely or absurdly. The casual but intense atmosphere is probably encouraged by the fact that Corbijn works alone, without assistants or light technicians. Some days, they would just drive off somewhere together and see what crossed their path. No matter how dark and baleful the images sometimes are, they come across as playful, too.

The collaboration between the two feels in some ways inevitable. Waits is an artist who captures every atmosphere in lively metaphors, revealing beautiful smells or noxious stenches, stunning appearances or hideous grotesqueries. Corbijn is a photographer and film director who became famous for his moody photography, helping to create identities for some bands (Depeche Mode, for example), offering an aesthetic in a genre of its own, mostly in high contrast black and white photos images. Waits' characteristic face and personality emerge both because of, and in spite of, Corbijn's specific approach. By occasionally including multiple images from a single shoot, there's also a hint at what one of these photo 'sittings' might be like.

What may perhaps be jarring are the occasional colour images included, so far removed from the collective identity of the Waits/Corbijn effort. In one image, Waits leans back over a tractor, his body framed by a blue square painted on the wall behind him, holding a bright orange toy gun. In another image labelled "San Francisco 2004", he sits at a table with a bright blue reflected surface, wearing a burnt orange collared shirt, the scene adorned with a single red rose (probably fake) in a cheap white vase, and the colourful condiments of some Asian food restaurant, soy sauce and bright red chili sauce. These images aren't the Tom Waits, nor the Anton Corbijn, that we've come to know, and their presence is a welcome peculiarity.

The last 50 pages of the book are dedicated to Waits' photographs - the first time the musician has published photos -casually and artfully taking the piss out of 'art', as well as a treat after 200 pages of Corbijn's quality photography. While Waits' images themselves are perhaps 'nothing special' in terms of artistic merit, the accompanying titles and stories are achingly absurd and full of emotion. One illustration and text pairing which stands out in excellence is 'Mystical Artist who is also a HORSE'. The photo shows a wall detail of an area where a horse has been 'gribbing', basically teething on the wood. The resulting shape bears an uncanny resemblance to… a horse, of course. "Have they been painting over his master pieces since he was a pony?" Waits asks in the typewritten description, waxing on the magical creation. He adds in awe of the horse's work: "I'm available if you need representation." Another series of three photographs documents patches of dark stains on grey asphalt, with only the small letters 'Monsters on the sidewalk' to accompany them.

With such a close-knit celebrity collaboration based in photography, the book may suggest to people that they'll be able to see 'what's really there' -- the real life of the celebrity. (Photography can show reality, right?) But Waits and Corbijn are not interested in reality. As music journalist Robert Christgau writes in the introduction: "If you think this art book will provide a key to the 'real' Tom Waits, think some more." Waits/Corbijn shows once again that photography is as much about creating realities as it is about reflecting realities.

Waits/Corbijn '77-'11 has been published by Schirmer/Mosel Verlag and is available for sale from Tom Waits' store. More information about the book can be found on the Waits/Corbijn site site. 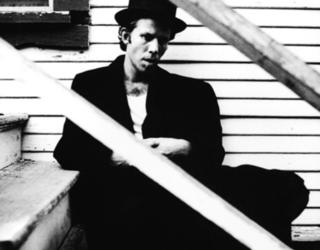 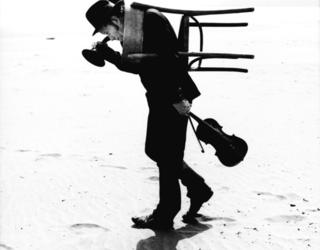 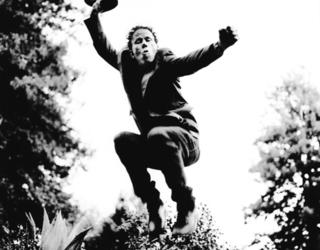 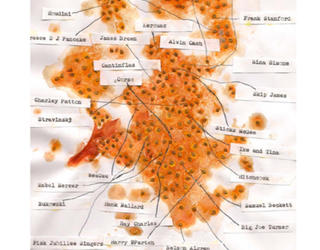