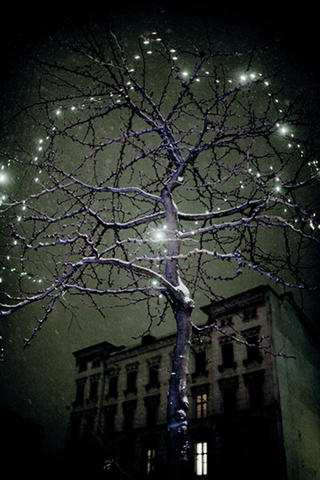 One Another, the first book of photography from Alisa Resnik (b. 1976, Russia), is dominated and perhaps defined by its darkness. Between night-time streets leaden with a mysterious blur and spontaneous portraits in poorly lit cafes, the book is a journey through a mood more than a story being told. The description of the book informs us that the images were shot in Berlin (where Resnik has lived since 1990) and St. Petersburg (where she was born), though the images themselves do not particularly identify the locations, nor does it seem relevant except when viewing One Another as a kind of autobiographical document of the artist. The concept, too, is murky: we're told that, for Resnik, "photography is the way to stop a moment and look deeper into reality, to step past the often painful dichotomy between subject and the object."

Sandwiched in between four cream-coloured pages of titles at the beginning and some short supporting texts at the back, the bulk of the book is coated entirely in black. The images are printed full-bleed, and any pages left as 'white spaces' are simply and entirely black, the edges of the images obscured by darkness. The impact of this is immediately apparent, at least for some period of time, though perhaps not for the reason Resnik intended: the smell of ink is overpowering. The visual experience of turning through the pages is similarly immersive, somewhat like walking through the dark with a torch: scenes appear before you with limited illumination, and as you move from one scene to the next, you're aware of all the hidden elements that surround you, unrevealed. Many of the images are also printed across a 2-page spread, calendar style, forcing you to turn either the book or yourself -- it's hard to get comfortable in Resnik's world. 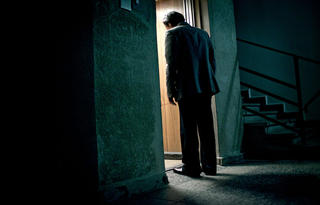 The images, a collection of 67 colour photographs, have an ominous tone. Night-life depravity is sometimes shown through the faces of the barflies, passed out or lost in ecstatic revelry, through the occasional inexplicable nudity or odd sights (wait, is that… a llama?!), and sometimes through the night's remains, like a table absent of people but full of empty glasses and streamers. The darkly coloured and heavily shadowed images absorb any sense of levity, however; even images in which the people portrayed are smiling take on an unsettling menace, a disturbance just out of sight in the nearby darkness. 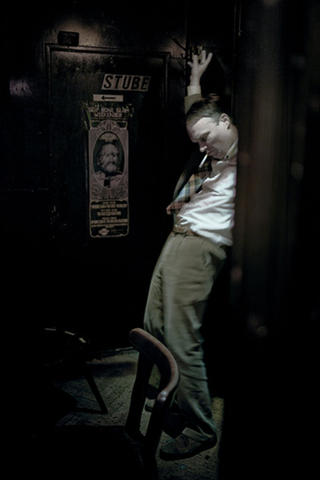 An epigram from Emmanuel Levinas opens the book: “Encountering a human being means being kept awake by an enigma." One Another, the book's title, serves as another hint towards a reading of the work, a way of understanding the connectedness between people (or lack thereof). Piece by piece, the reader can construct his or her own narrative from the unexplained exchanges, the suspicious glances and loving embraces. There are surely many versions of the truth to be seen for those willing to project their own experiences onto Resnik's unusual and beautiful photographs. It is perhaps inevitable, however, that you'll still be left in the dark.

Resnik's project won the 2013 European Publishers Award for Photography, which resulted in its publication by the five supporting publishers. One Another is available for sale from Dewi Lewis (English) and Kehrer Verlag (German).

Alisa Resnik was previously featured in GUP#33, the Stories issue, including some of the images that were eventually published in One Another. An excerpt from that feature can also be viewed in our online portfolio.