When the Revolution Came: An Interview with Heba Khalifa

While Cairo was protesting the Mubarak regime in 2011, Egyptian photographer Heba Khalifa (b. 1977) tried to be in the streets to cover the Egyptian revolution whenever she could. The problem was that she also had to be at home to take care of her one-year-old daughter. This resulted in her photo series From the Inside, made at home and featuring only mother and daughter. Khalifa speaks with GUP about turning news stories into personal work, how far one can go in including children in a photo project, and the current climate in Egypt for photography.

A few years ago, as a newly divorced mother, Heba Khalifa needed to find a way to support herself and her daughter. She had studied visual art and criticism, so she approached a newspaper to ask for work as a photographer. After a month of training she got the job. Yet, she saw photography only as a means to make money. Art, to her, was still reserved for painting. This changed when the protests on Tahrir Square started.

“Two things happened when the revolution came,” she says over the phone while her daughter sits on her lap. “First of all, I went outside as much as I could. I covered the revolution from January 25th until Mubarak was done, 18 days later. And I made hundreds and hundreds of photos for the newspaper. But I didn’t feel like these news photos represented my own experiences. So, when I got home, I painted on them.”

In between the wounded protesters that she photographed, she painted angels flying in the air, and people dancing. “The photos merely showed demonstrators, but what I was feeling on that square was something beyond that. It was a new sense of freedom.”

Yet, with her one-year-old daughter at home, this new sense of freedom was constrained. As she continued to photograph at home, she turned her camera on the conflicted feeling of wanting to be outside while being tied to her house to take care of her child. “That was the second thing that happened. I staged scenes that expressed my feelings of isolation and being stuck at home as a single mom. Instead of painting over these photos, I put all my ideas in the staged photo itself, so this time I was ‘painting’ with my camera. I was so pleased with the results! Finally, I felt like I could truly catch an experience with my camera.” 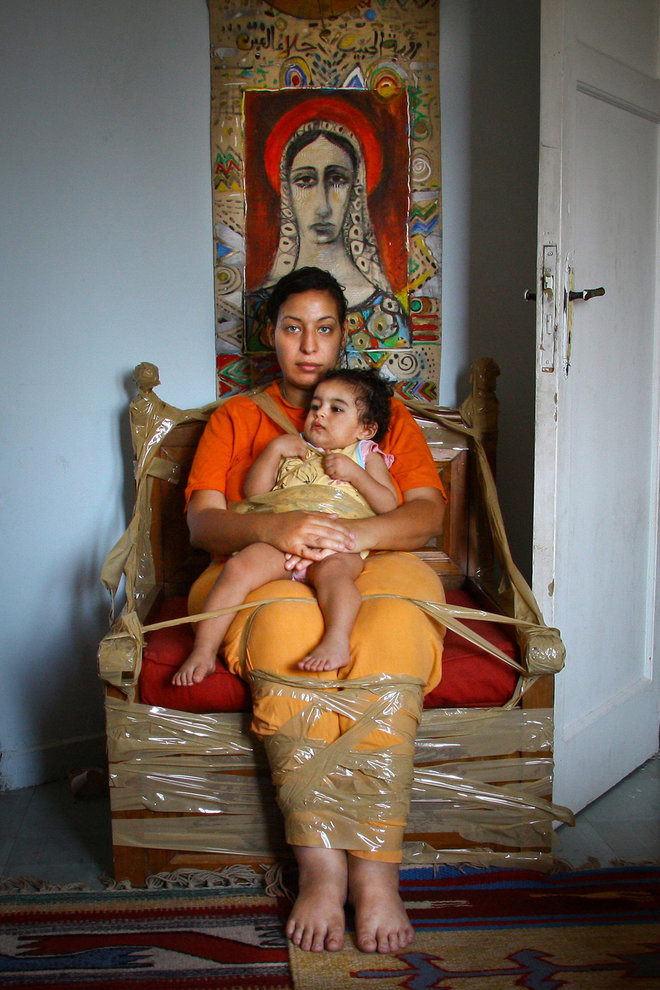 In one of the photos there are green sprouts growing on top of her head, and balancing amidst them a large pair of scissors. ‘Cutting dreams that grow inside me... So they fall while they’re still green,’ the caption reads. In another photo Khalifa included her daughter. They’re sitting on a large wooden chair, and mother and daughter are both tied to each other and to the chair. Packing tape is holding them in place.

This project, called From the Inside, was picked up internationally by art publications and festivals, yet it also brought criticism. “In an exhibition, a lady came up to me and said: ‘Why do you have a child, if you aren’t suitable for having children?’ I was shocked when she said this. ‘I love my daughter,’ I replied, ‘but being tied to home is the other side of having a child. And I feel that I have the right to talk about it.’”

Yet something was still gnawing. “I had this fear,” Khalifa says while her daughter is audibly playing nearby, “that when my daughter gets older, she will be upset with me for some of the photos.” Khalifa asked her friends what they thought. To her relief, one friend said: “You tried to express yourself, you tried to explain a fact, that doesn’t mean you’re blaming her for your situation.”

Khalifa thinks that there’s a taboo for women to say negative things about their experiences when it comes to having children. By taking photos of these experiences, she hopes that more people will start talking about them. “During an exhibition here in Cairo, a young girl – she was 18 – said to me: ‘My mom told me that when she had me, she couldn’t do a lot of the things she wanted to do. But we can have a nice relationship now because I’ve started to understand what her life has been.’ I said: ‘Yes! That’s what I mean. A kid shouldn’t have to feel that it’s her fault, but it shouldn’t be a taboo that a mother’s life is impacted by the birth of her child, either.’”

While internationally, Khalifa’s personal work has received a lot of coverage, in Egypt she has troubles getting it published. “After the revolution, not much happens in the streets anymore. The newspapers discover they don’t need as many photographers as they used to, so they fired them. Now photographers try to win contests in order to have a little money to realise their projects. While I can easily sell my news photos, I cannot get my conceptual art published here in Egypt. Newspapers only like news photos with clear captions; if it’s less straightforward, they don’t publish it.”

Yet, if there’s one thing Khalifa has learnt these past years, it’s that she shouldn’t give up doing what she likes. “In fact, I think it was a five-year-old kid who once advised me on this,” she laughs. “Before I was working as a photographer, I was teaching art to children. I made them paint, then we talked about it. I enjoyed the interaction, because I taught them art, but they also taught me many things. One day I was walking outside with this very young kid, Ahmed, who was five at the time. We found a chicken in the street, and I said to him: ‘OK Ahmed, let’s try to draw this chicken.’ He looked at me with surprise and said: ‘I will not try, Heba, I will do it.’ He was totally right of course. Making art is not about trying, it’s about doing.”

Homemade was recently published as a book by Gulf Photo Plus.
See more of Khalifa’s work on her website.