Irish photographer Gillian Hyland (b. 1982) creates mesmerizing staged images, presented as film stills or theatrical moments. Each scene is based on her own poems, and depicts characters in human dramas and isolated emotional situations. Now, she’s self-publishing her first photography book, Words in Sight, featuring a selection of her works spanning the last decade. GUP had the chance to talk to Hyland about her cinematic images.

Tell us about the interaction of your photographs and your poems. Have you always combined the two media?

It all began when I was collecting several poems I wrote and, as I didn’t want to publish a poetry book, I decided to make them into images. Sometimes one poem is very specific to a photograph, and other times a poem may influence a small series of photographs – that just varies. But my poetry is definitely the starting point in terms of mood, it’s the narrative the images are built on. Despite the fact it’s a still, the expressions and the way it’s composed add an extra layer to it. You can feel a story happening although it’s always ambiguous about what’s going on.

You have a background in cinema and television. What attracted you to the medium of still photography in the first place?

As an art director, set designer and stylist in the film industry, I have always been building narratives. I did castings, I finalized locations and got in all the props. During these years, I collaborated with a lot of photographers, but because photography is just one person’s view, it was their thing at the end of the day. I wanted to do things differently and make it my own. As the photographer, you’re the one taking decisions, you don’t have to justify or compromise. When I first started, I totally jumped off the cliff, I had no idea how to do this. I found out in photography there’s a reason everything is in there; you can’t get away with very much, unlike in the film industry. People are going to stand and look at every single detail in your picture.

So it’s more of a challenge to you?

Well I think photography is more difficult to me because it will always be close to my personal life. It brings back so many memories. When I originally started writing, I had these notebooks that I used to clear my head. As I got older I summarized my writings which turned into little poems. This way my experiences got into my poetry without any intention to do so. That’s why this book is probably the most honest body of work of what I’ve done so far. Because it has taken me so long to get to this point.

How do you get started on composing your images?

The poems and the locations are the starting point for composing the image. It’s a bit of back and forth, which is quite fun because they eventually find each other. Then I’ll decide who the characters are, what are their emotions, and from whose point of view it is. The models in my photographs – mostly actors – must bring something of their own. I direct them and go through the story together, which is about emotions we all feel. I ask them to think of an event in their life when they experienced that particularly emotion. This way, they’re not faking it that much. And once the casting is done I start on wardrobe and props to create a setting. But over forty percent of the book is shot in Cuba so that was done slightly differently. When I’m working in London I can look for locations and actors online, it’s a lot easier. But in Cuba I had to find places and people just by walking the streets. It was exciting for me because it was even more organic and the Cubans brought a lot of themselves to it as well.

I exhibited in Paris with another photographer who was living in Havana, and I was amazed by the beautiful colours and the slightly vintage feel his images had to them. I got really excited and planned my visit. I arrived with a bag full of clothes and a little booklet of my work so people could see what I’ve done. I went from door to door and asked everybody and anybody. I would sneak through doorways if I could and found these old colonial houses and enormous abandoned buildings. I experienced randomness and wasn’t sure if it was going to work, but when it did it was even more rewarding.

Which image surprised you the most?

The picture I shot of a ballerina in a ruined theatre was a complete surprise. That particular day I was photographing by the side of the theatre when the producer told me the police were on their way. I didn’t have a proper permit, so I rushed around the corner and then, I couldn’t believe my eyes: The building, which I had my eyes on ever since I took a glimpse through the cracks in the wall, was open. The roof wasn’t totally covered, so nature had taken over the building. It was perfect! When stuff like that happens, you get so excited. 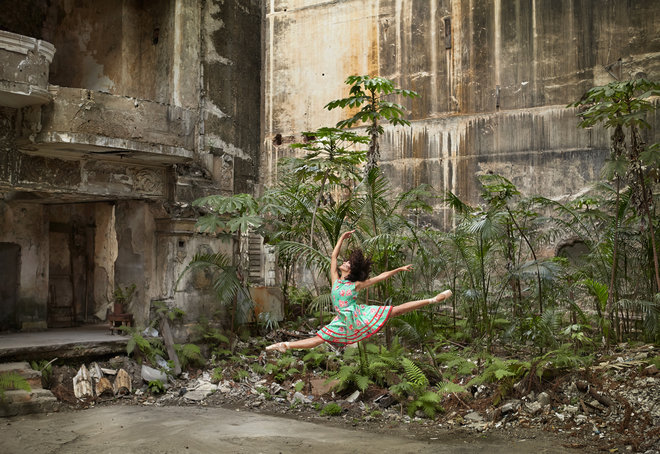 Tell us about the picture with all the nautical equipment. Did you arrange those props?

That was another surprising moment. My assistant and I found this house of a deep-sea treasure hunter. It was like a museum. The kitchen was made out of the wood from a boat, he had old diving equipment hanging everywhere and he had all these bookshelves with little artefacts. I felt like I couldn’t touch anything, it was full of his personality and passion. The things that were in his house added another dimension to the final photograph. 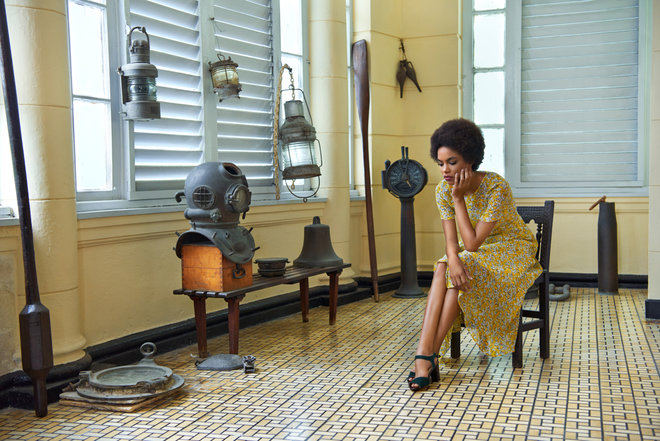 Looking back at the last ten years of work, how did your photography develop?

When I first started, I controlled everything. I directed the people a bit heavier and I felt exposed by my own images. But as time has gone by, the places and the people came more organic. I go through the process of making my images and, once it’s done, I feel released. It became a lighter experience.

Gillian Hyland’s book Words in Sight is planned for publication and is currently raising funds through a kickstarter campaign, on until October 31, 2017.