This year, World Press Photo has been very clear about one thing: it is not allowed to erase or hide information in the process of post-production. When elements that are visible in the original (raw) files have been deliberately obscured, disqualification automatically follows. Due to technological innovations, however, cameras have gained dramatically in light sensitivity and that has given way to an overall winning image in the competition that was shot in the night. All within the rules. Yet, it shows very little detail.

On February 18, 2016, Warren Richardson was announced as the winner of the World Press Photo of the Year 2015. In the picture, titled ‘Hope For A New Life’, we can see a man sitting down on his knees handing over a baby to an anonymous third person (of whom we can only see his or her outstretched arms). The expression on the face of the prominent male figure (on the left) is one of despair but that does not prevent him from a gentle transfer of the toddler, passed underneath the barbed wire with care. The photo was made at the Serbian-Hungarian border (baby moves into Hungary) and it is presented in a black and white tonality. 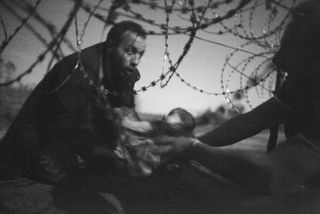 Richardson came to be in the position to take this photo as he joined a group of refugees in their attempt to stay out of sight from the border control and, for that reason, he decided to make exclusive use of the available luminance from the moon instead of using a flash, which would trigger the attention of police. The image ultimately came out a bit blurry – indicating motion – and also with a grainy noise that would normally be considered a technical flaw but, in this case, only added extra value to the overall result. Paradoxically, the message is all the more penetrating due to the dimmed light, making that the bottom and right edge of the frame are only showing contours of shapes and forms.

It might have all happened unintentionally, as Richardson was more or less forced by circumstances to approach his subject in this way, but it was at least technically possible to reach a level of visibility that, from a viewer’s perspective, allowed the picture to find the right balance between action and affection. This is the kind of equilibrium that arrives from seemingly contradicting camera effects – giving access to what could not be seen with the naked eye, yet also partly curbing the edges of the frame, thus creating a high contrast between what is essential and what is secondary information – but it is not unique in itself, as becomes obvious when comparing Richardson’s image with previous winners of the Photo of the Year.

Paradoxically, the message is all the more penetrating due to the dimmed light

It could be noted how the last few editions of World Press Photo lead to overall winning images that seem to share a certain aesthetic form; something that could be recognized for vibrating a 'detached intimacy'. How should this common characteristic be understood?

The most recent Photos of the Year (John Stanmeyer, 2013 and Mads Nissen, 2014) show, respectively, a group portrait of anonymous men holding up their mobile devices, situated on a beach while set in a warm blue glow (of the sky, due to the moonlight), and in the other we can see a couple, one sitting person looking devotedly to his partner lying down on his back. The latter image was established indoors while only making use of the scarce light that was available in the living room. The curtains are closed, giving the overall photograph a green-yellowish radiance. 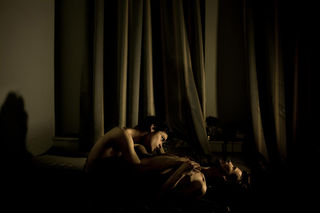 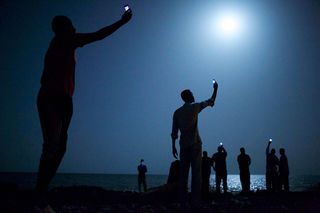 Nissen’s images is even so impervious that it is necessary to read the caption in order to learn that this concerns a gay couple from St. Petersburg – which makes all the difference in appreciating the context of what is depicted (related to the issue that gay people have a hard time living in Russia). In the case of Stanmeyer’s winning image, something similar applies. The shadow figures in his photograph are only made newsworthy by the knowledge of what it is exactly what they are doing (they are African migrants on the shore of Djibouti City trying to find a connection for their smartphones to call home).

The curtains are closed, giving the overall photograph a green-yellowish radiance.

The intensity reflecting from Richardson's picture arrives from a more dynamic situation when compared to previous two winners. However, without going into further detail and leaving aside all the obvious differences that exist between the three consecutive Photos of the Year, there is one characteristic they all have in common. Colour or monochrome, indoors or outdoors, and regardless of the variety of gestures, all three images have a keen composition and a delicate resonance of light thus communicating something that can be defined as 'confidential'.

This inwardness is remarkable, considering the more apparent tendency of (photo)journalists to investigate a subject in the opposite direction; to disclose what was previously obscured. Specifically in reference to these awarded pictures, all communicate something surrounded by mystique, which is a quality in them that seems counter-intuitive at first. For is it not inconsistent to be inclusive on the one hand – to have outsiders share in something that was withdrawn from the shadow of reality – while also having the impulse, maybe not so much to camouflage but at least to lean towards the enigmatic?

In relation to this alleged incongruity, it might help to quickly bring back to memory a few other previous Photo of the Year winners: Tim Hetherington (2007), Anthony Suau (2008), Pietro Masturzo (2009), Jodi Bieber (2010), Samuel Aranda (2011) and Paul Hansen (2012). In Warren Richardson's picture there is the motion blur (as in Hetherington's winning image), the black and white aesthetic (similar to Suau's winning image), the dark of the night (in line with Masturzo's winning image), and although the living child here has a different connotation when compared to the dead babies in Hansen's winning image, that symbol of vulnerability is also included in Richardson's Photo of the Year. 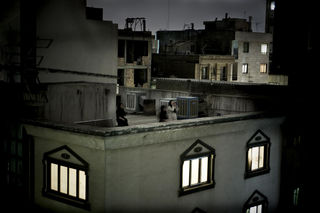 The parallels are less obvious in Bieber's confronting picture of a young girl deprived of her nose. This should be considered a staged portrait and, in that sense, doesn't really make for a good comparison with the others. Aranda's depiction of two figures is a more spontaneous portrait (he just found the people in their particular embrace) and it has a connotation ('loving care') that also reflects from Nissen's awarded portrait of the gay couple. Yet it doesn't really make for a reasonable resemblance with Warren Richardson's winning image of this year. Or does it?

The harsh reality from either World Press Photo of the Year aforementioned is toned down by a certain aesthetic 'softness' which ensures that we, the viewer, are invited to look at something that would otherwise be oppressive and just too private. This is very much in line with the atmosphere that reflects from Richardson's picture.

Over the last year, many photographs have appeared that show the discouragement of people – refugees – trying to make it from one end of a razor wired fence to the other and those images very often include children. In fact, the 3rd prize series in the spot news category this year, by the Turkish photojournalist Bulent Kilic, deals with this dramatic theme in a very straightforward manner. Eventually, however, the general jury of World Press Photo opted for an overall winning image that ended up being a little more ambivalent. 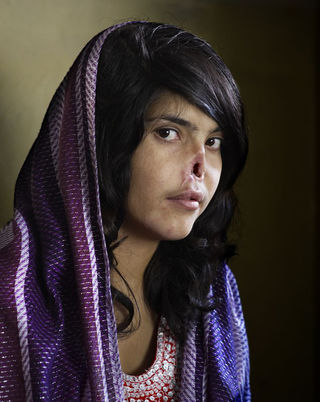 For the Photos of the Year 2010 (Bieber) and 2012 (Hansen) we could at least say that those are, respectively, a portrayal of a specific person and a picture showing a mourning crowd in a very straightforward manner. All faces are directed to the camera, the people are easily identifiable and it is not too difficult to describe what they represent. In all the other winners since 2008, however, there is a certain abstraction; something that makes it more difficult to reduce them to what they initially communicate.

Although the disassembled relation to their context makes it harder to 'read' what those images are actually about – and this becomes even more difficult as we move further away in time – they gain in expressive signification on the long run. This might also become true for Warren Richardson's Photo of the Year 2015.

The contextual minimalism that directly arrives from the circumstances of the situation – the poor light conditions that are compensated only partly by the light sensitivity of the camera – gives way to an end result that is ‘raw’ yet also ‘ambiguous’; the picture is untouched but also underdeveloped. Eventually, as we are moving away from the topic (refugees trying to get into the EU), the most sustainable features of Richardson’s winning picture will probably be its more general humanistic symbolism (the gesture of handing over the child under the barbed wire in the secret) and an overall adornment due to its aesthetic characteristics – revealing and disclosing at the same time.

Perhaps this confutation relates to a natural tendency of photojournalists to ‘cover' reality. That is, the verb ‘covering’ needs to be understood in contradictory active meanings of the word: to report (as in 'covering the news') versus to envelope (as in 'covering the exposed'), and both of them accentuated according to the subjective view of the photographer. The particular choices made in the consecutive World Press competitions to come to the overall winning Photos of the Year might furthermore include an assumption that the news first needs to bath in toning down elements that peel the harsh skin of reality in order to come to a sustainable viewer’s engagement with the subject. 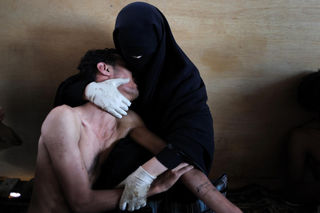 We can’t know the deeper motivations that have lead to their ultimate choices, but the members of the World Press Photo juries seem inclined to be attracted to a certain type of images when it comes to the announcement of the Photo of the Year. Elections that seemingly include the presumption that the communication of a leading current affair is only functional when packaged in an aesthetic form that makes for an abstraction of that subject and as such gives way for a more enduring humanistic symbolism.

What is then awarded with the highest possible accolade are news related pictures that supposedly carry both detaching and intimate elements. As in previous World Press competitions, this year's general jury has expressed a specific praise for a photograph in which the contextual information is somewhat obscured, making for a more indirect reference to the topic at stake. While it is absolutely restricted for a photographer to create such a result in the process of post-production, detached intimacy is not only accepted but apparently also highly endorsed when it is arrived at with the support of progressively sensitive camera technology.