The Painter Holding a Camera: An Interview with Richard Tuschman

Richard Tuschman (1956) is an American photographer whose poetic photos draw deep inspiration from painting. In his earlier project Hopper Meditations, Tuschman paid homage to the realist paintings of Edward Hopper, achieving in photography what Hopper did in painting through a meticulous process that combines dioramas, painting and photography. In his recent series Once Upon a Time in Kazimierz, Tuschman continues to employ this method in order to tell a fictional story of a Jewish family in Poland during the early ‘30s. In this interview, Tuschman discusses his process, his fascination of the everyday and the inspirations he takes from art history.

You were quite open about finding inspiration in Hopper’s work in your previous series. What were your inspirations for your new series, Once Upon A Time in Kazimierz?

The first thing that inspired me was seeing the architecture of Kazimierz and experiencing the sense of history that there is in the town. I decided to go there because my wife grew up in Krakow and my own family also originates from a nearby area, so the town really has a historical resonance for me, personally. In New York, where I live, most things are relatively new – the oldest building that you’d see is about a hundred years old – but over there, an old building could be almost a thousand years old. I always get a lot of inspiration out of art history for some reason, so the series is also inspired by painters that I admire.

Are there any specific painters that you pay tribute to in this series?

I think that the ways that painters deal with light lends itself to photography as a medium - and in this series I was going back and forth between different kinds of lighting for the particular moods I was after in each piece. In some images the lighting is more optimistic, like the way Vermeer or Balthus would use lighting. In the darker and more mysterious images I was more drawn to early Van Gogh paintings and the way Rembrandt painted with light - one of the photographs in this series is even named ‘The Potato Eaters’, after the Van Gogh painting. I call myself a ‘failed painter’ because such a huge source of my inspiration comes from painters. 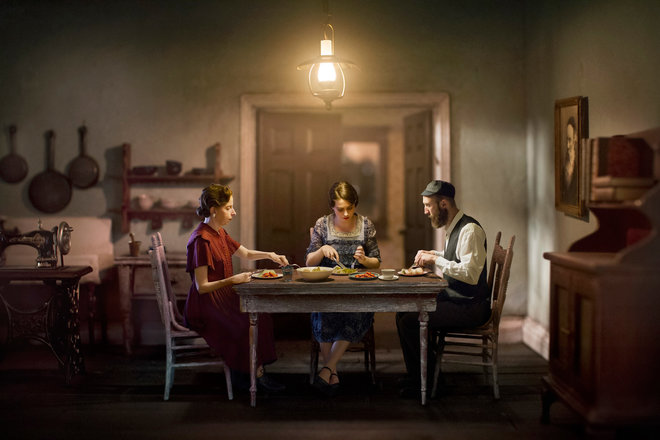 Most of the painters that you mentioned often depict everyday scenes, which are evident in your photographs as well. What is it about the everyday that you find so interesting?

I think that’s where the most interesting parts of life happen, in terms of family and intimate relationships. It’s the guts of a person’s emotional life; that’s where it happens and that’s what I want to deal with. I tend have an introverted personality, so it suits my temperament, as well. What I really want people to come away with from this series, and what I think a lot of photographers hope for with their work, is empathy for the characters. And in a way it seemed like visualising those more intimate and relatable moments was the most suitable setting for that to happen.

Is that also the intention behind the timing you chose? Setting the series in the ‘30s in Poland gives a clear foreshadowing to the events of WWII.

I wanted to place the narrative in the early ‘30s because I wanted to hint at what was to come but not explicitly deal with the Holocaust - I feel like that would be out of my pay grade. Generally, I seem to go for darker images, but I wanted to have a bit of emotional relief to the heaviness of what was to come for the characters of the story.

Your method of making images is like a mini theatre; you build sets, cast actors and you direct the whole process. What’s the most time-consuming part of your process?

I feel like if I had a more extroverted personality I would probably want to do something like direct a film or play production, but working with smaller sets suits both what I want to communicate and my temperament. Building the dioramas is by far the most time-consuming, but photographing the models is the most challenging and most critical in some ways. I’ll spend a few days photographing the models and two years on everything else.

Your series includes a lot of interiors. How did you decide what these scenes will look like?

The interiors are a combination of the architecture that I saw back in Kazimierz and the interiors that I see in paintings and drawings that I collect in my digital database. I took some liberties when making the spaces; the rooms are a bit more grandiose than a family of that time would be able to afford, but I was really more interested in presenting a vision of a sort of ‘dream life’, almost like a surreal theatre, rather than a straight narrative documentary. 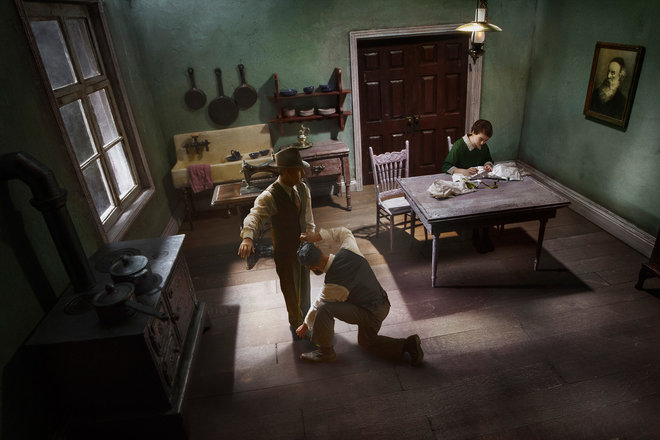 How did you cast the people who would be part of this ‘dream life’?

The way I choose models is really intuitive - I usually have it in my mind’s eye and look for people in my life or online who fit the part. Some models are family or friends of friends, others I found on model websites - like the girl who plays the female lead. Without me really realising it, she ended up looking a lot like my mother, which is probably not an accident.

Do you want people to know what’s going to happen to these characters or is that something you want to keep hidden?

I want to keep the storyline open, but it’s very difficult for me to not reveal the ending - I ended up having my own very specific sequence of events in my head. People do know, in a way, what could happen just because of the period in which the story plays out, but within that, I wanted to leave people with as much room as possible. I really like that people can have their own interpretations of my story.