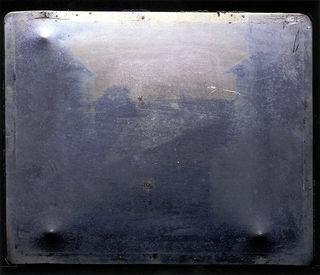 The first photograph, an object created around 1826 by Joseph Nicéphore Niépce, is housed in a small, dark room within a larger gallery at the Harry Ransom Center in Austin, Texas. Capturing the view from his window at his country house, Le Gras, Niépce made his first photograph using a Camera Obscura with at least eight hours of exposure. The image rests on a polished pewter plate, with indentations, scratches, and further damage of age. It’s stored meticulously, as a sacred artefact more than a photograph, “housed in its original presentational frame and sealed within an atmosphere of inert gas in an airtight steel and plexiglas storage frame, [and] must be viewed under controlled lighting in order for its image to be visible.”

Indeed, viewing it is a tricky thing. On first sight, there’s only a pewter plate. Yet, as you move yourself around the image, fragments of an image appear. Because of the uneven surface, light hits the object revealing some pieces more than others, so you move again. It’s not possible to see the image in one view: you have to dance with the image to see it all. 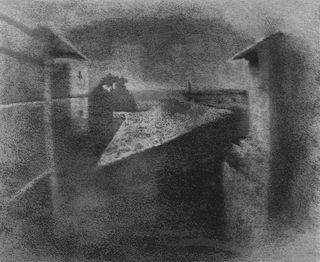 The image most often shown to illustrate the first photograph is a reproduction, made by Kodak in 1952, which allows you to see more accurately the contents of the image, freed from the necessity of complicated lighting.

(Read more about the preservation process on the web site of the permanent collection.)

What does this feel like: A photographer, viewing the first photograph? Precious. A reminder of the fact that we’re standing on the shoulders of giants.

Few of us are inventors; we’re artists, or skilled laborers, or enthusiasts, or technophiles. We take what has come before us and try to make something new, or simply beautiful or truthful, but it is only through the grace of those before us that this is possible.

Much has been written about the many purposes that photography serves. Many use photography as a way to document places they’ve been, and amazing sites. The first photograph, however, is now a site in and of itself. The photograph has become the object worth visiting. 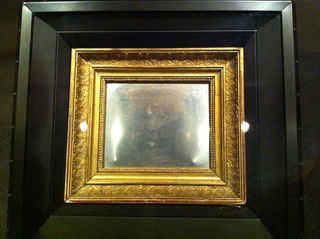 What did I do, when I saw the first photograph? I photographed it, of course. With an iphone.

And more important to me than the silly souvenir image is the feeling that came over me with the meeting of Niépce’s image with my own. His image was created with pewter and bitumen of Judea and oil of lavender and white petroleum. My image was created with zeroes and ones by pressing a button on a compact piece of electronics, of which millions are in existence. The distance and the proximity of these two images is the story of our lives. We measure our place in time by those who come before us. Who knows how we will look at these images in another 185 years?

The First Photograph is part of the permanent collection of the Harry Ransom Center at the University of Texas.