The Enduring Image: An Interview with Noemie Goudal 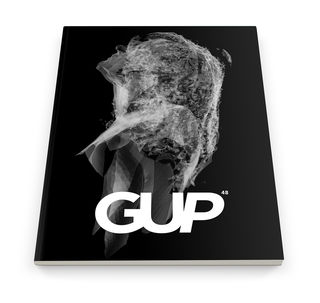 French photographer Noémie Goudal (1984) is known for her installation-based landscape photography. With constructs of images glued on cardboard, she misleads the viewer’s sense of perception and suggests buildings or landscapes within other landscapes. Her images are shot on location, using analogue techniques. Goudal spoke with us about the venture of making an installation and the value of a photograph that captures more than just a moment.

Your installations appear deceptively real, yet when you take a closer look, you can see folds in the cardboard or pieces of rope that hold the installation in place. Why do you leave these details in the photos?

I hope that they challenge the viewer to look for where the reality is: where it stops and where the construct starts. I find it interesting that our brains are so used to seeing perspective, that every time you offer a brain the possibility of seeing it, he takes it and it fills in the rest of the image. However, when you see the fold of the paper or the thin ropes, hopefully your brain can navigate better and you feel a bit more inclined to really go into the image. I think that if you understand the construct of the photo, you can project yourself better into it and spend more time with it. 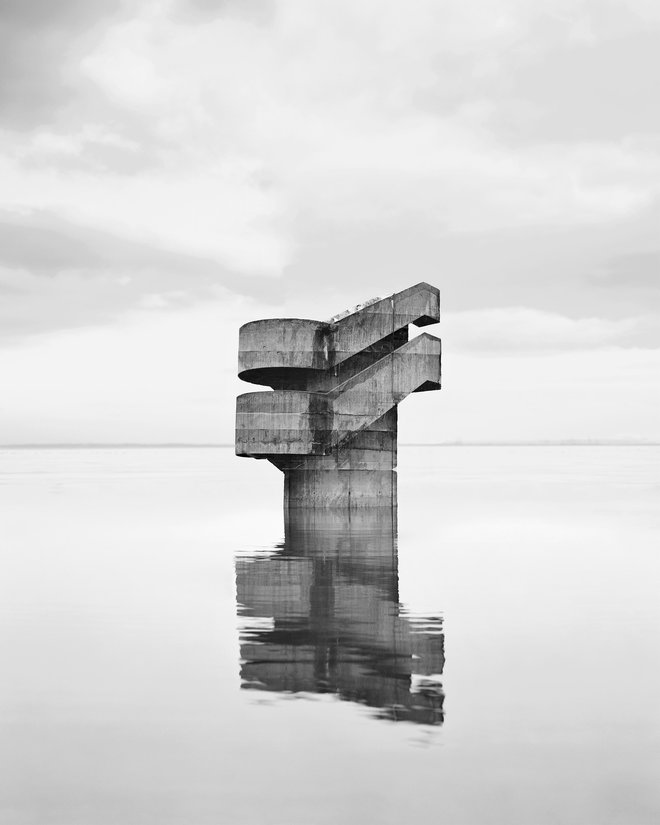 What was the first photo that you took in this way?

That was Promenade, in the series Les Amants, which I made during my studies at the Royal College of Art in London. I wanted to do a project on an island, with photographic installations, so I went to Orkney Islands in Scotland. But it was so windy there, I couldn’t even stand straight. It turned out to be too complicated to do my installations there, so I had to find another solution. What I did was, I photographed the island and then printed that on paper and made installations in a less windy place. So the paper helped me bring the island elsewhere. Later on I repeated this process: using prints of places in different locations. 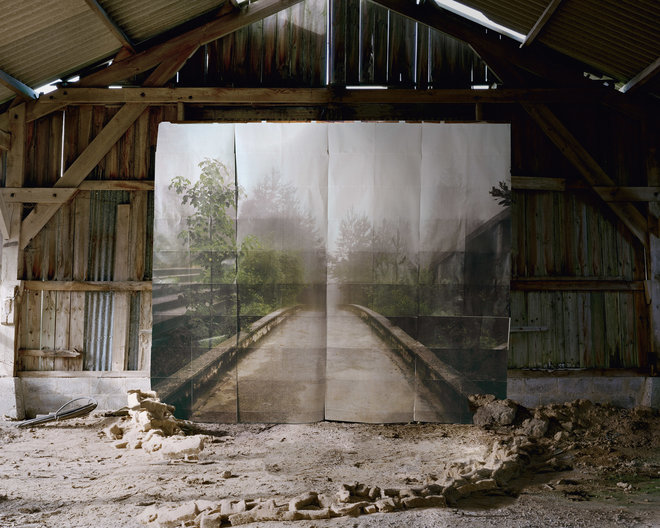 Every now and then you add an image without an installation in it, however. What role do you intend for these images to play?

If you show such an image next to another one that is constructed, the viewer will still look for the construction where there isn’t one. You will start to question and maybe look better at the image. I did that especially in the next series I did, Haven Her Body Was, where there are a few images that had no installation in them. The photos Well and Combat are done without constructs. 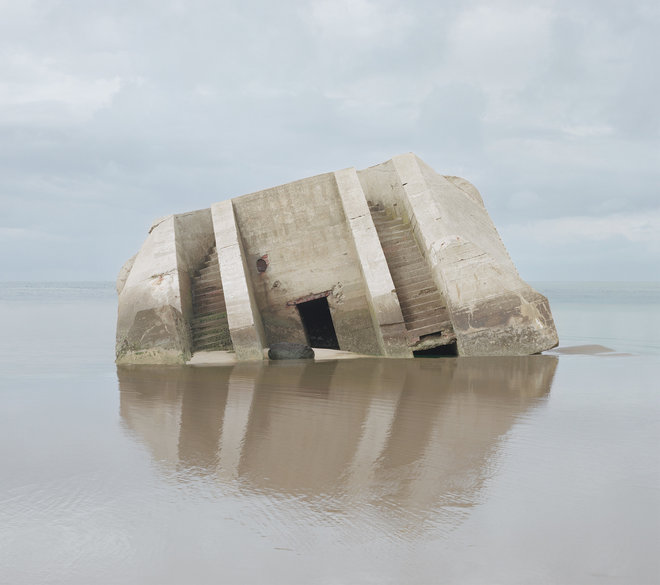 Combat looks quite unreal, is this not an installation?

No, it’s totally real. I found it in France in Normandy on the beach. It’s a bunker from World War II. The bunkers were supposed to be destroyed, but it was so expensive that they just left them there. It’s funny, because many people thought that this building was fake, especially since many of my photos contain paper backdrops. Taking the photograph of Combat made me research geomorphic architecture, which is architecture that has a direct link to nature in order to imitate or draw our attention to it. That is how I came to research the architecture of observatories and then build my own for my series Observatoires.

Tell us more about The Observatoires.

For that series I collected a lot of images, by travelling and photographing fragments of many different buildings. Sometimes I found buildings on the internet, sometimes I just passed by something I found interesting. Then afterwards I put the different fragments together on my computer and printed them on paper. It’s a fun process: the research before, and the constructing of the buildings and then photographing them on the beach. What I like is that it’s not clear anymore what the function of these new buildings is. I see them as a sculpture, they become a different thing. 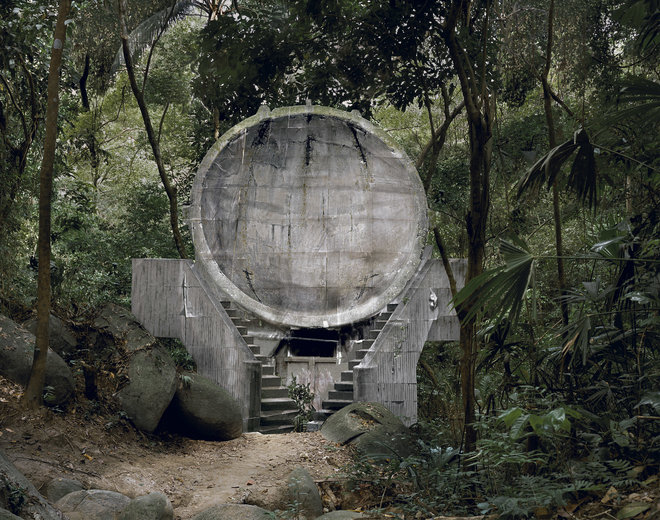 What was the most difficult installation you ever built?

The Observatoires were relatively easy to make, because it’s just something on paper and then I mounted it on cardboard – that isn’t too complicated to make. My newest series Southern Light Stations was probably the most difficult I’ve ever done, because the installation was so large that we had to use scaffolding. We had scaffolding seven metres high built on the beach. There were five people working on it, the whole day and most of the night. It was also complicated because we had to build a sphere, and had to build a box at the back of the sphere, with smoke in it. And then the smoke had to evaporate all around as a circle. Sometimes we only have an hour when the weather is right. Especially when we work on the beach and there’s a tide, we have to be careful because we can suddenly be surrounded by the sea. 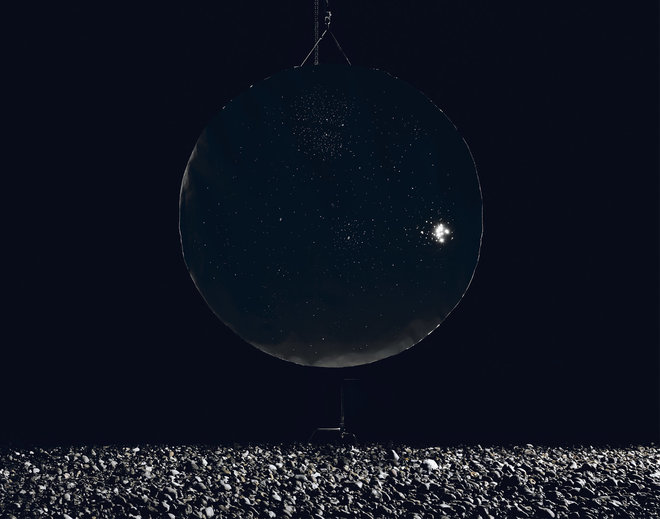 Prior to studying photography, you studied graphic design. What did you learn during those studies that you still use in your photography?

The most important thing I learnt was working together and seeing the options that collaborations can give. Saint Martins, where I studied, was a very vibrant, dynamic school, with lots of people doing film and animations. Of course I developed a passion for design there, but mostly it taught me how to do things with people.

I hope that my photos offer a space with which we can talk about the landscape and about the relationship between the land and the manmade.

Yet there are no people in the photos.

No, because I came to realise at some point that having an image offers the viewer a space to be. If you put a person in it, then the viewer has less space to invent and reinterpret the image. It’s almost as if there’s too much information for him to still imagine himself inside it. I hope that my photos offer a space with which we can talk about the landscape and about the relationship between the land and the manmade. In my early series Les Amants, this became my central topic.

Les Amants is now being performed as a dance too, by the Icelandic dancer Bára Sigfúsdóttir. How do dance and photography interact in the piece?

In several ways. In her dancing, Bára morphs her body in ways that look like the installations in Les Amants. It’s quite beautiful to see this. Also, there’s a moment that a photo falls – and that makes a sound which becomes part of the music. What I like about this performance is that sound, dance and photos all become events. 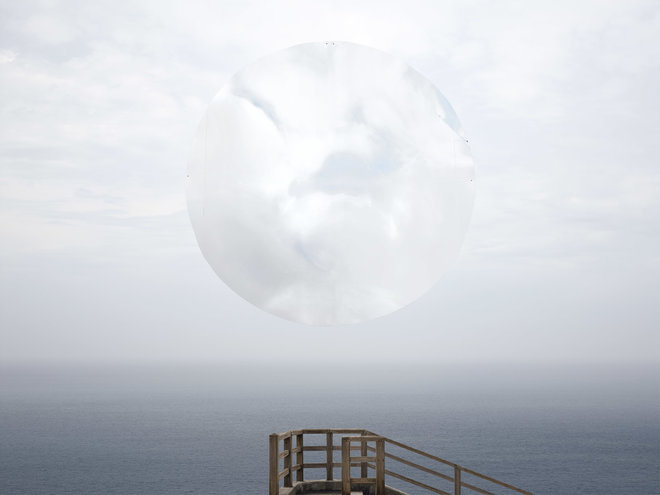 How does a photo become an event?

When Bára asked me to collaborate on this, she wanted me to make a photo that would change in the course of one hour. So then I had an idea of doing a disappearing image. I looked for paper that falls apart when it gets wet, and I decided to print on it with a laser printer because that way, the paper would go, but the ink is so strong that the image stays. The image is of a 19th century water reservoir made of concrete with arcades, so it’s a very strange architecture. I thought it was interesting that it was meant to be filled with water, but when you put actual water on the photo, it disappears. Then, behind that first image, on plastic canvas, an island near a coast becomes visible. It looks like the water has eaten the land, with just a crumble of land left. What I like is that the photograph leaves, it disappears, so it’s an action, in contrast to a still image on the wall.

For most people photography is about a moment, why should we see it instead as a period?

I’m interested in how a picture is composed of different layers. When I was writing my dissertation at the Royal College of Art, I researched how images are composed, and how you’re supposed to tell a story in an image. So in my Study Of Perspective, a physical installation, I created different layers in the image, which allowed more moments inside the same image. For me that felt like I elongated the image. The same is happening in the images in which I use paper backdrops, there are several layers within one photo, too. Because, for me, making an image means that I create a stage where several moments come together. It’s not like ‘the decisive moment’ of Henri Cartier-Bresson. I look at it differently: for me an image is a place that you can visit and revisit. It isn’t a place that you capture for a second, it’s a place you can live in.

Noémie Goudal earned her BA in graphic design at Central Saint Martins and graduated from the Royal College of Art in 2010 with an MA in Photography. In 2013 she won the Prix HSBC prize for photography, which enabled her to make her book The Geometrical Determination of the Sunrise published in 2014. Goudal has had major exhibitions worldwide and is represented by Edel Assanti (London) and the Galerie Les Filles du Calvaire (Paris). She lives and works between Paris and London.