Taking Off. Henry My Neighbor

One of the most significant characteristics of photographs is their orphaned status. That is to say, they may have vernacular roots in the camera or, more in general, they may be traceable all the way back to the short-lived moment of the capture of light on some surface that made them into pictures, but there is no fixed location for them to land on (or in). This nomadic potential is, in essence, what makes 'anonymous' photographs so interesting for the sake of recontextualization – a quality that has triggered so many visual artists, over the years, to make use of 'found footage' as the raw material from which they then 'author' a self-established (or curated) body of work.

There are many examples to name here, but one of the most recent appropriations is from the hand of Dutch visual artist Mariken Wessels. She previously published two books, Elisabeth - I Want To Eat (self-published, 2008/reissued by Alauda Publications in 2010) and Queen Ann. P.S. Belly cut off (Alauda Publications, 2010), which are both based on the private archives of apparent protagonists with troubled lives who nevertheless somehow managed to act upon their crises in a creative manner. 'Taking Off. Henry My Neighbor' (Art Paper Editions, 2015) can be seen in line with those two titles and in that sense as the completion of a loose trilogy. 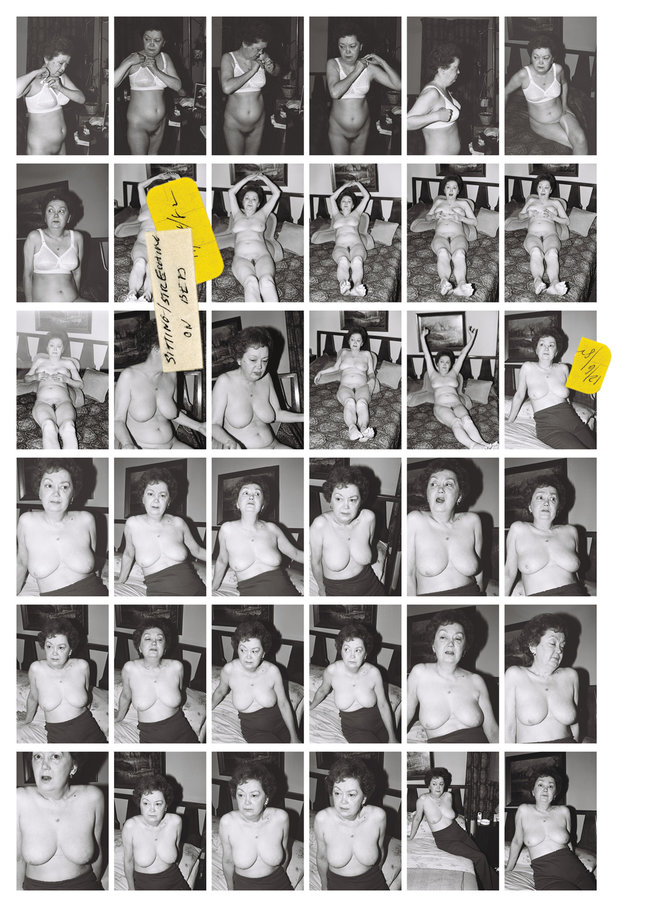 The book contains little explanation of what it exactly is that we are looking at. To paraphrase the existential questions arriving from Queen's Bohemian Rhapsody: “Is this real life? Is this just fantasy?” Wessels already addressed that ambiguous zone between fact and fiction in the aforementioned works and she seemingly does it again in Taking Off. Henry My Neighbor, presenting the story of a man named Henry who obsessively photographed his wife Martha, until the point of her eventual exhaustion. Is this yet another mysterious 'anti-historical' biography arriving from a proclaimed coincidental retrieve of a private archive?

The archive contains approximately 5,500 boudoir photos of Martha S. and she appears to be around her late fifties. Indeed, that is not exactly the moment in a woman's life when she is generally regarded as having her body in the 'ultimate shape', but although she exposed herself at an age far beyond that of the average pin-up model, the look on her face is not so much one of shame. It rather reflects a state of indifference, or even boredom, although the repetitious shoots next to and on the bed – which seems to have been part of a morning ritual and only remotely hints at something sensual – might also be considered a humiliation. We don't exactly know how Martha really felt about it all but as we learn from the epilogue in the book, she eventually decided to leave Henry and ‘took off’.

The title has a double meaning, of course, and 'taking off' thus also refers to the theatrical removal of the bra, revealing the gravitational pull on her body. Martha might no longer be as flexible as she used to be but nevertheless turns and twists her body to the best ability in the most awkward positions to please the man behind the camera – the preoccupied husband who just could not stop being the potent 'go-getter' with a seemingly fetishistic pleasure to act out cliché Playboy aesthetics. The fact that both Martha - as model - and Henry- as photographer - remain far removed from that ideal leaves both a humorous and a tragic appeal to the results of their pseudo-erotic enactments. 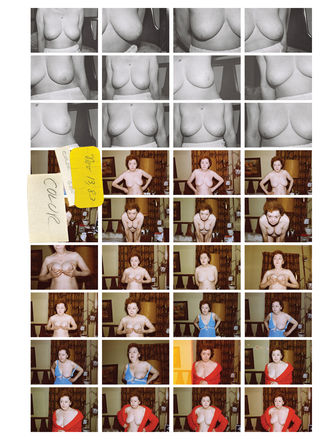 There is something tedious about it all which might lead the viewer into a state of mind reminding of the feeling one has when not being able to escape from a numbing event; an uneasiness arriving from overseeing an archive of over 5,000 more or less similar portraits that have been produced in the relative short time span of approximately two years. A concentrated look into this book thus comes with the risk of ending it with an overwhelming boredom that equals a nightmare.

Before witnessing all that, 'Taking Off' opens with a selection of uncanny full bleed spreads on matte paper dealing with hard to distinguish snapshots leading into the peculiar story of Henry and Martha. This section functions as an omen of the seemingly endless amount of nude portraits that follow, a repetition to the absurd: 150 glossy pages, each one containing the results of one roll of 35 mm film presented in grids of 6 x 6 pictures when taken vertically ('portrait' format) and 4 x 9 pictures when Henry positioned his camera horizontally ('landscape format'). On and on it goes, always in a frontal position that clearly shows Martha as a middle-aged woman with her permed 'coif' in the same regime of nude poses, all of them acted out between 1981 and 1983.

The archive contains approximately 5,000 boudoir photos of Martha when she was around her late fifties

We can know the exact period as some of the portraits have stickers with dates on them, while there are also labels that indicate a certain system in Henry's obsessive drive; a specific categorization of labelling (e.g. 'sitting', 'squeezing', 'standing taking off', ‘bust closeups', 'bra/slacks', 'laying flat', etcetera) that only starts to make sense on the final page of the 'glossy' segment. For there, conclusive to the more or less repetitive regime of portraits, we find a ridiculously extensive nuance of all the poses/situations and the months in which they have been taken. There we find a template stitched together with tape, making it plausible that all that we have seen before actually belongs to an ever extending archival system created by Henry.

In line with how the book started, it then continues with another extensive sequence of matte pages – this time indicating the aftermath of the affair. A few blank pages stress the fragmentary state of both the archive and Henry's mind once Martha decided to stay out of the picture once and for all. By the look of it, he was never really salvaged from the gap in his life defined by this abandonment. The only thing that could compensate for that loss was to make collages created from fragments of the cut-up portraits that he made of his wife, into extrema; montaged juxtapositions with typed out titles that are to be understood in line with the earlier mentioned systematic template of the poses; creatively composed puzzles of scraps that are indicated as 'squeeze bust cross-xx', 'bra round sit', 'arms back twist color' (most of the archive consists of black and white portraits but at some point Henry apparently mixed it up with some rolls of colour film), 'double belly knees up' and many other plastic, to-the-fact descriptions. 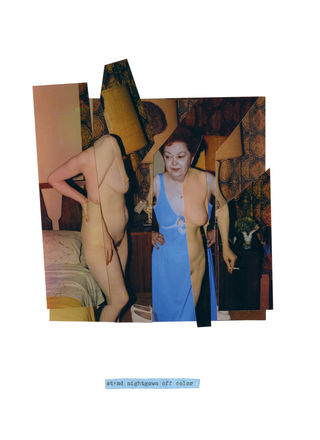 The voluminous and pervasive book closes with the presentation of a small selection of three dimensional white clay sculptures that translate the abstract form of some of the mentioned collages. These small sculptures echo the cut-and-paste montages of Martha's nude portraits – all of it allegedly arriving from the artistic ambitions of Henry – and have been photographed in front of a neutral grey background, not so much different from how museums archive their stock. All is concluded with a few more matte pages hinting at the dramatic ending of the apparent 'hermit's life' that Henry eventually began to lead. He retreated from photography all together and disappeared into the woods of northwestern New Jersey, only barely surviving by setting traps in order to catch small wild animals. Until he eventually died? We can't know exactly what eventually happened to him, as the book does not give a final conclusion to how (or even if) his life ended, it only triggers the assumption that nothing has been heard from him ever since.

What a story! One wonders though: how much of this all has Wessels' fingerprints on it...? Is it all merely 'found footage' and really nothing but a dry recovery of a legacy? In the end what counts is this: any way the wind blows, it doesn't really matter. Or even if it does very much matter to those who just can't live with not knowing the exact story behind it all, it is fundamentally up to Mariken Wessels to leave a final conclusion up in the air. For that is exactly the equivocation which leads to the uncertainty of meaning that is at the core of her artistic vocabulary.

The publication can be purchased directly from the artist or at various bookshops around the world. A selection of 'Taking Off. Henry My Neighbor' is included in the exhibition Quickscan #2 at the Nederlands Fotomuseum Rotterdam (23 January - 8 May 2016) and a solo show at the FOMU in Antwerp will start on March 4 (ending on June 5, 2016).