French photographer Patrick Willocq (b. 1969) became known for his photos of hand-built stages in the forests of Congo. He collaborates with the Walé, Congolese pygmy women that have recently given birth to their first child, whose songs he takes as the starting point of his photos. Willocq is featured in GUP#47, The Big Ten issue. In this interview he talks about the serendipity of finding his muse, switching from documentary to staged photography, and what it means to stage another person’s idea.

A photo of an airplane made of reeds, visibly hung by ropes, against a backdrop of blue cloths, stitched together with white puffs of clouds painted on it. In the ‘airplane’ a woman sits; she’s painted in red and wears copper bracelets that mark her wealth. In another image, we see another woman with skin painted red; she is sitting on a fake leaf in fake water, surrounded by dizzying green leaves.

“These photos are about songs that Walé women sing,” Willocq explains when we meet at LagosPhoto, the yearly Nigerian photo festival where his work is on exhibit this year. “Based on her lyrics, I make a sketch on paper, then we build a decor and then we stage the song, in which the singer plays her own role. Of course it’s my visual interpretation, but I think that I get close to making a photo that’s really about her. Traditional photography means that the whole picture is made and designed by me, but this is more of a collaboration.”

Red paint
It all started a few years ago, when, out of curiosity, Willocq took a different turn at a crossroads he knew well. He was photographing in Congo, the country where he grew up. He’d had a corporate career in Asia but returned to Congo in order to become a full-time photographer and to reconnect with his youth. “I had been taking this road, from Bikoro to Bokonda, many times,” he says. “It’s a road that basically goes left, but at some point you can take a right. One day I decided to find out what’s there.” Without knowing it, he was driving into a different territory, where a pygmy clan lives that was unknown to him. A few kilometres down the road, he saw a woman totally covered in red paint. “I was just like: Wow! I had never seen that before. I wanted to know more.” 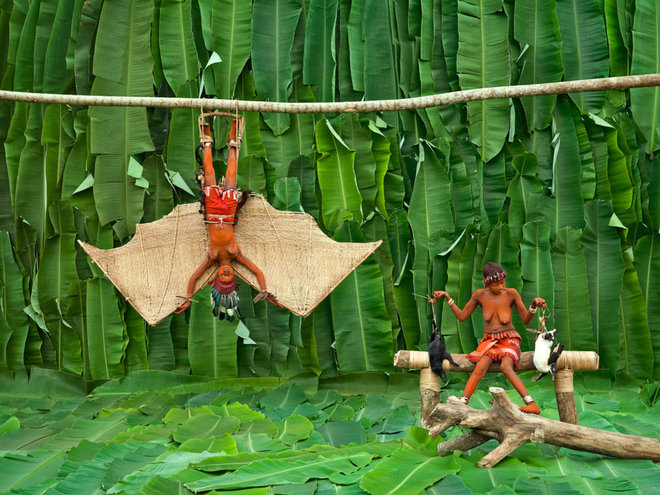 The woman that Willocq saw was a Walé, locals explained to him, and she follows a tradition in which she paints herself red and lives in seclusion for several months to several years after the birth of her first child. Since it is believed that the seclusion is good for mother and child, she doesn’t have to do her normal work. When she returns to her work and husband, there is a ceremony in which she performs songs and dances.


I understood that the songs are the soul of the Walé, and that I had to photograph those somehow.

Willocq Googled the word ‘Walé’, but the only result that turned up was the American hip hop singer Wale. So he decided to spend time in the area and learn about the ritual by witnessing it. “What fascinated me about this tradition was that it is happening in an area which is quite poor,” Willocq says, “especially culturally. Traditions and religion got hit big time during the past wars in Congo. But even before then, with the missionaries, with education and colonisation, traditions have disappeared fast. This is an area which typically doesn’t have a lot of cultural artistic traditions left. Except for this.” 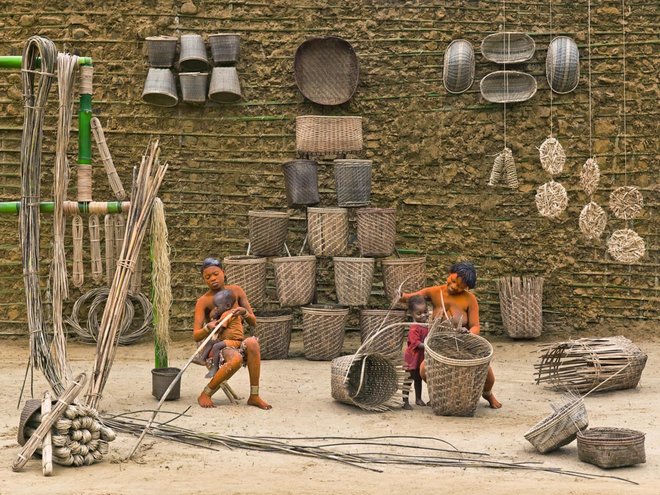 Soul
Willocq spent a year with the pygmies and took reportage photos. However, as he learned more about the tradition, he grew unhappier with his photos. “I was taking photos of African women breastfeeding and dancing,” he says, “but at the end of the day there was little difference between my photos and thousands of images out there.” Then, one day, Willocq was invited to attend the seclusion ending celebration of the Walé women. While he was listening to the women’s songs during the ceremony he was intrigued: “Somebody told me that the song is telling the whole story. So I asked: ‘Which story?’ And the person said: ‘Everything that she felt during her seclusion.’ That’s when I understood that I had to learn what the songs mean. I understood that the songs are the soul of the Walé, and that I had to photograph those somehow.”


Of course it’s my visual interpretation, but I think that I get close to making a photo that’s really about her.

Together with the Congolese ethnomusicologist Martin Boilo Mbula, he recorded and translated the songs. Willocq laughs: “In the beginning, even when Martin was translating for me, it still didn’t make sense to me. There were so many contradictions in the text, Martin needed to decode it all for me. To give you an example: one Walé was singing about how she drinks a lot of alcohol which didn’t make sense to me, because Walé are not supposed to drink. Thanks to Martin I understood that she was ridiculing another Walé who needed alcohol in order to dance well. There’s a lot of competition between the Walé, and what she was saying was that she danced better than the other woman.”

Plane
Each photo has a setting that Willocq builds together with a team of people that he recruits from the village. The stage is a football field next to a school. Since there are trees everywhere, it’s the only place that’s suitable for photo shoots. The scenes take two to three weeks of building “The builders are pygmies, they know which materials we can use from the forest,” Willocq says. “I spent a lot of time looking at their technologies. How do they make their fishing net? How do they build a house? I use their knowhow to build the decor. For instance, their technique for making a fishing basket enabled me to build a plane, or something that looks like a plane.” 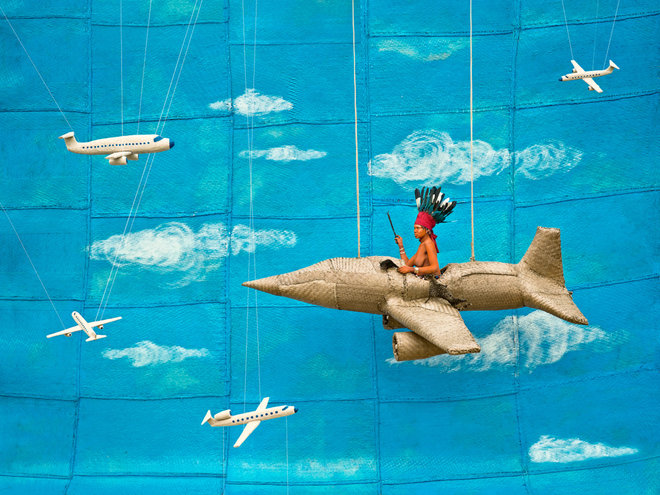 Willocq always photographs the Walé while they’re still in seclusion, since that’s when they’re painted in red. So he listens to the songs while they practice them, before the seclusion ending ceremony. If they agree to be photographed, and if her family and husband agree too, he helps them pay the goods and money that they need to be able to come out of seclusion.There are also Walé who don’t want a photographer around, Willocq is quick to explain. “I would never try to convince somebody who doesn’t want to be photographed. And if there is any doubt, we find that out while I try to understand the songs. If the Walé wouldn’t want to be photographed, she won’t help me understand her song. It’s also a fun moment for me, because I don’t know yet what the Wale is going to sing about, so it’s always a surprise what kind of a photo I’ll have to make.”

Baby powder
Since the songs are about the Walé’s experiences during her seclusion, it has also happened that they sing about him, the photographer. “One time I bought a Walé some bracelets, and with the agreement of her husband, we went to another village to buy those. On the way back, she was in the car, and as we went through the villages she made a lot of noise, she was really proud and screaming. I was in the front. When we were listening to her song later on, I discovered that it was about this moment in the car. And since it’s her song, that meant that we would make a photo of it. So I asked: ‘What would you like the photo to look like?’ And she said: ‘I want to be in the car and you should drive it.’ It was not very practical though, since I needed to take the picture, so I couldn’t be in the car. I wanted to take the right suggestion of movement in the picture. So the village chief said: ‘OK, I’ll play you.’ And then someone covered him in baby powder so that he looked white. We were laughing so much.” 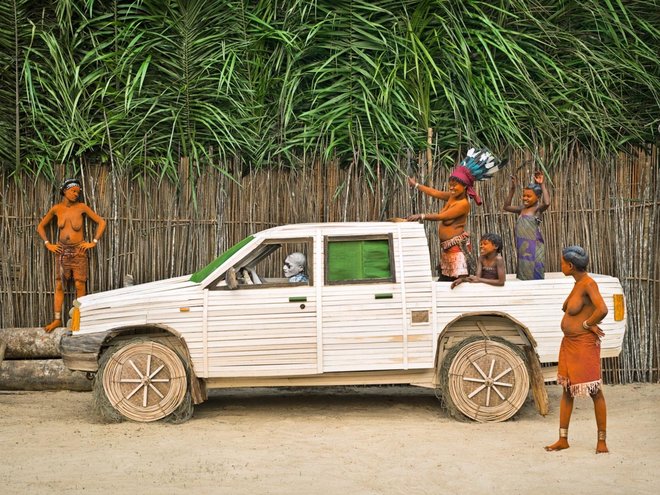 Even though the way his pictures came to be were motivated by the wish to make images that are new visually, there are political arguments for these images, too. “I’m tired of seeing the same image of Africa all the time; I call it the ‘Afro-pessimism image’. Yes, in Congo there’s war, there are rapes, there’s famine, there are refugees. The country and people have suffered a lot, but a lot of photographers have covered that. Let’s not fall into the trap of believing that Congo is a war zone everywhere. So I show other images: images of people who are well respected and who are powerful. They might be struggling too, but still you can see that there’s human values: of survival, of resilience, of beauty and the relationship with nature and between people. That’s African daily life, which, I would say, isn’t less serious than war.” 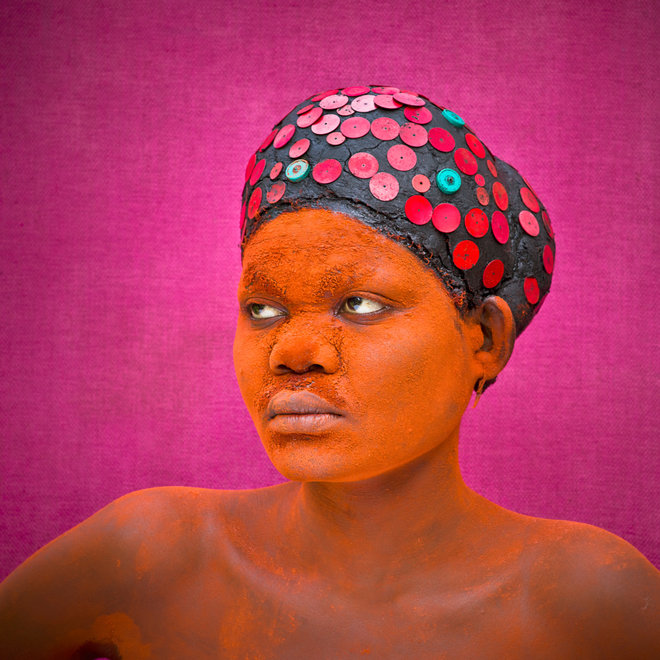 Close-up
At the moment, Willocq is working on two new series. One of these is shown in GUP #47: Walé, Second Look. “I always regretted that in my earlier series I wouldn’t come close to the women’s faces. So I wanted to do a close-up series to see the expression of the Walé, the features, the look in their eyes. When a Walé becomes a Walé she gets a nickname with which she positions herself in the eyes of the community. Like her songs, it says a lot about her character. So I wanted to have a series that focuses on that: her features and character.”

The second body of work, Superwalés, is a new series that is still in progress. In it we see images of women and girls with red capes standing gracefully on a red carpet in between trees, or on top of a hill. “It’s a series on what the Walé ritual could look like in the future,” Willocq says. “I admire and respect this ritual a lot, but I’m also amazed that it’s still alive today. So I’m creating super Walés, super moms, the way they could look like in 2050. I hope that the ritual will still exist by then, that globalisation has not destroyed it.” 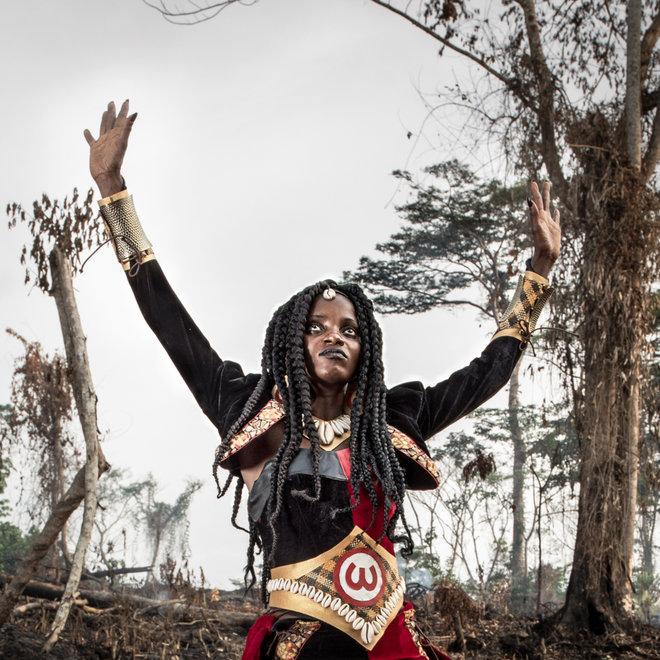 See more of Willocq's work on the Walé:


on GUP's website:
I Am Walé Respect Me
Walé, Second Look

See more of his latest series The Superwales on LagosPhoto's website. 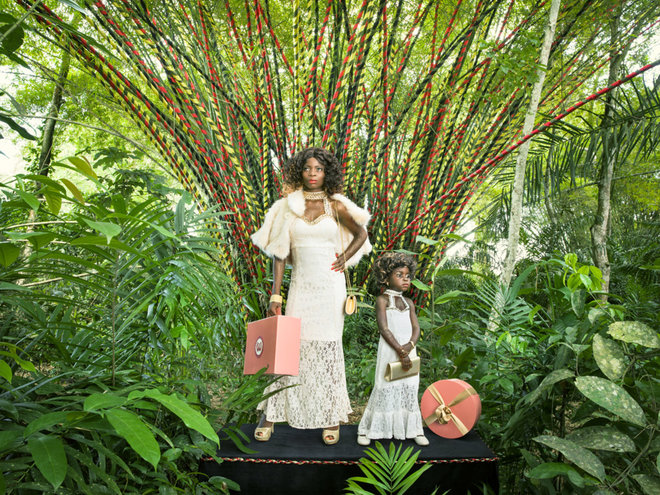 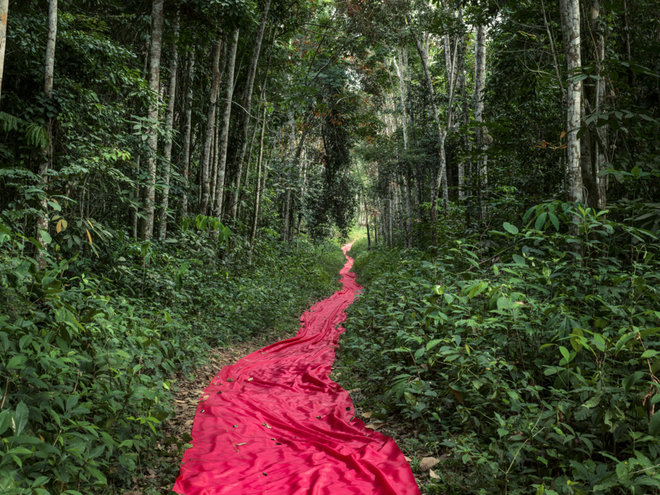