Sometimes one little thing will do the trick.
- Haruki Murakami, from the novel Dance Dance Dance

This year I’ve seen exhibited photographs of self-mutilation, rotting corpses, mangled road-kill, sexual and political torture, and on and on, but it’s a recent show at Frankfurt’s Museum für Moderne Kunst that has haunted me the most. It’s a retrospective (of sorts) of the work of Gerald Domenig (1953), an Austrian-born adopted Frankfurter. Let me be clear: there’s no blood and guts, or screaming children in his photographs. You might be haunted because it’s not quite clear why they’re so unnerving. The MMK itself is architecturally unnerving, and Domenig’s exhibit is tucked away between the permanent and temporary exhibits, in a corner the museum normally reserves for photographs. Gerald and I meet there one Wednesday morning and he guides me through, a bit like a snake leading someone into their cave.

We start at a large wall collage at the front of the show. Domenig explains some of the private jokes and local history encrypted there. There’s a photograph of the fish restaurant that used to be underneath the museum before they were paid to move across the street. There are old friends, catalog clippings, a CD case with one of Domenig’s photographs as the booklet insert suspended on the wall by four nails, and much more. First impression is that it’s been ripped from the artist’s studio, made originally for inspiration and to remember moments and friends, but Gerald explains that the selection and sequence was improvised shortly before the show opened. “The collage was already planned months before, to break up the boring repetition of the rest of the exhibit— one series after another— but the selection and hanging was improvised three days before the opening, using materials from two boxes of work."

Never have I seen a photographer use white in this way

The rest of the exhibit has staggered alcoves, each showing different series of Domenig’s work. The first section is full of eerie urban landscapes, what could be described as literal street photography. You notice quickly, regardless of which alcove you stand in, the whites. Most prints include at least one spot, or splotch, or rectangle that has been under-exposed to the point of creating a bleached-bone grade of white. Gerald describes these as “lamps” or “lights” that shine out of the frame: “These lamps are terribly important to me because they bounce the existing light in a room back out onto the viewer.” To get this effect, sometimes he lays a piece of scrap paper over the photographic paper while printing so the area remains completely unexposed. It gives him a lamp and is his own personal spin on retouching. 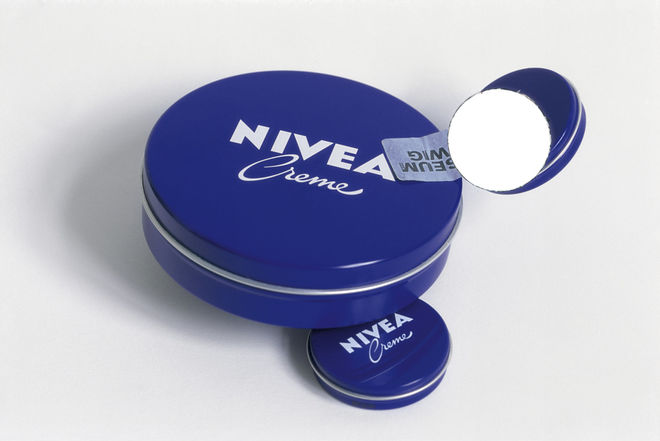 A lot of analogue printers talk about having an absolute black in every print, a ‘foot’ for the viewer. Never have I seen a photographer use white in this way, to flatten space, to push elements forward out of the background, and kick your feet out from under you. It’s visually irritating and that is something Domenig wants: “In English, irritation is something painful, you would avoid it. But in German it has multiple meanings, also a positive connotation.” I ask him if he is hunting for this feeling when out shooting. First he explains that he’s on a holy mission to eliminate words like ‘shooting’ from the lexicon of photography, then he says that these urban landscapes stimulated him and activated something inside him: “When I find a place I want to photograph, not even two horses can pull me away."

I ask about photographic influences. He says he has none. Well, except for one thing he read once in an American photography magazine: “There was far less loss of shadow detail than I had expected.” He says this has become a mantra for him, a continual prayer. It’s the reason his prints err on the side of being too bright. 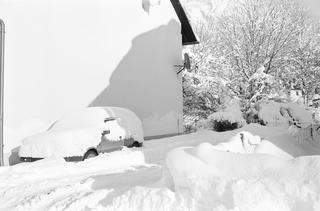 There are shadow details in his life too, and because he’s so sensitive and at the same time so open, you can see into them. He tells me he has extreme problems with the world at the moment and that sometimes it “paves” over him. He says he’s always had problems making money. He says he doesn’t feel at home anywhere – not in Austria, not in Germany. The only artist I can compare him to, in terms of his speaking voice, and the way he holds himself physically, is Lucien Freud, the German-born London adopted painter. There’s something similarly alien about Domenig. His waking life seems full of discomfort. He moves in his clothes as if they were sewn from sandpaper. His face is as dynamic as all the surfaces in his images, flexing shades of white and contorting as he works it with his fingers. His eyes get happy though when they scan over one of his prints. It may be one of the few things that brings him comfort, puts him back in his own skin— looking at what he’s made.

As we wander deeper he notes that several works were the product of a commission received but in the end were rejected by the commissioner. He still can’t understand why today: they are clearly the best he produced for the job. But, there might be poorly aligned expectations, too, if you hired Franz Kafka, famous for his novella about waking up with the body of a beetle, to write a poem for your wedding. Domenig’s idea of success in a picture is probably different from yours.

In a nutshell, Domenig is after a geometric funny game

In a nutshell, Domenig is after a geometric funny game. One in which shapes and tones blend into one another, get obscured by foreground elements, lead the eye to make surreal connections, and speak to one another visually. He explains this further with several riddles I’m still hoping to decode: “Motifs for me show the oscillation between nothingness and almost nothingness”, and “Dentists save teeth, my job is to save images.” One thing he doesn’t want is for his work to be seductive: “An image is only that which appears through the process of observation, not something that jumps out at you. If it jumps out then it’s something different. An image is about something hidden.” 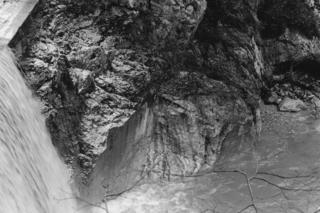 Walking through the exhibition with him, I see more hidden motifs: A city-bus window is the same shape as the window behind it on the back side of a house. The diptych of two waterfalls is connected by the surreal floating hand in between them bridging the gap because it’s the same shade of white. Dark triangles, made from a house roof, its shadow, and the shadow of the adjacent wall, overwhelm you with ecstatic panic, by rushing out of the picture. These games also frequently get interrupted by blurry trucks entering or exiting the frame. Such peripheral spasms turn up the panic because they are like streakers at sporting events, bringing disorder onto the otherwise orderly field where play (guided by rules) was already underway. His medium is his message. Maybe what’s more masterful though is that he avoids the pitfall of being academic because his obsession with lines and shapes feels so personal, the way Kandinsky’s circle paintings do, or Klee’s line drawings.

This is an artist who spent his adult life developing a method to be able to express himself and now is losing the choice to continue. 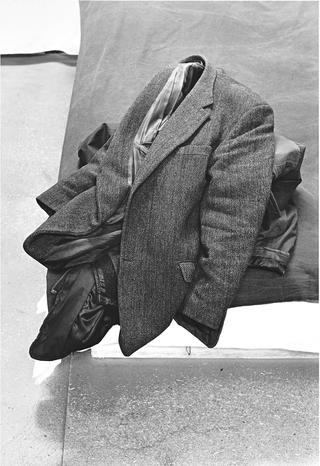 Gerald doesn’t know how much longer he’ll be able to work in the same way. His favourite film is being discontinued and he can no longer get his preferred photographic paper for printing. This is an artist who spent his adult life developing a method to be able to express himself and now is losing the choice to continue. You can understand his comments about having ‘problems with the world’, how it’s ‘paving over him’. Imagine you found a way to express your deepest fears, pains, and joy, so much so that the result makes you light up like a lamp is shining on you. Now imagine the materials you need for doing that disappearing more and more everyday disappearing from store shelves like melting ice. This is happening to photographers of Domenig’s generation. Their world is being paved over. Many of their prints have never been photographed or scanned. They don’t exist anywhere online. They could mop the floor with you with a good enlarger and developer, but have never opened Photoshop.

Young artists can learn a thing or two from Domenig: you don’t need writhing naked bodies to make raw pictures. Courage as an artist means following your obsessions despite the danger of ridicule. The way you work is just as important as your work. And keep going, because good work always finds its audience. Gerald has been waiting a long time to find his audience. He had scant solo exhibits in the ‘90s and 2000s, but lately is getting more attention in Germany.

The fact that success is blooming late in life for Gerald might partially be due to the fact that he has a very specific, unusual philosophy. He’s encased himself so deeply inside that philosophy that he is secure, and isolated. Artists either create the conditions in culture necessary to be understood or wait until culture swings their way. Typically a lone wolf only gets due respect post-mortem. Or they get forgotten. They are close friends with more successful artists, as Gerald was with German painter and sculpture Franz West and many others. They hammer along in the adjacent atelier, following trends and the scene while quietly doing their own thing. 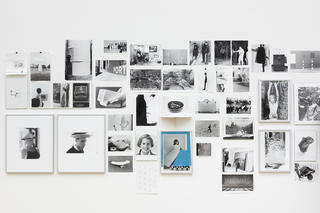 When decades of this quiet dedication come together, as they do in Domenig’s exhibit at the MMK, the weight of it is profound. It takes guts to stand inside the scene and do something different. Domenig has brought his distinct style into multiple photography genres— street photography, landscapes, the still life, interiors. It’s impossible to guess which images came first because it all has the same intense force. They have uncanny magnetism. You can see that the same two alien hands made all the images. They let light flow through acetate inside dark boxes over and over looking for surprising details in the shadows, and lamps to put on the wall to help light the way.

The work of Gerald Domenig is on exhibit at Museum für Moderne Kunst in Frankfurt until September 6, 2015.