When I first met Shirley, she simply struck me as visually interesting. She was a flamboyant stylist with a variety of wigs, coloured pantsuits, and eclectic accessories: fruit stickers on her lapel, leopard print ascots, and coloured rubber hair bands on her fingers as rings. Walking into her apartment was like walking into someone’s brain. There were Post-its scattered everywhere with notes such as:

7:57AM - Wednesday, December 29th!
I heard a loud BANG -
Evidently at the flore
beneath me - or one
of the ones above my
Apartment!

This was lying around as casually as a solitary memory itself on a coffee table. Shirley had been diagnosed with dementia for the first time twenty-five years earlier. I started photographing her and her world, just trying to re-examine portraiture by focusing on parts of her body and her environment, instead of simply framing her face inside a backdrop. Having a relationship with someone with dementia led me to re-examine the meaning of memory itself and its role in photography, its presence or absence in the family photo album, and the relationship between photographer and subject in a situation where one of the most frightening diseases hangs in the room like an anvil on a thread. 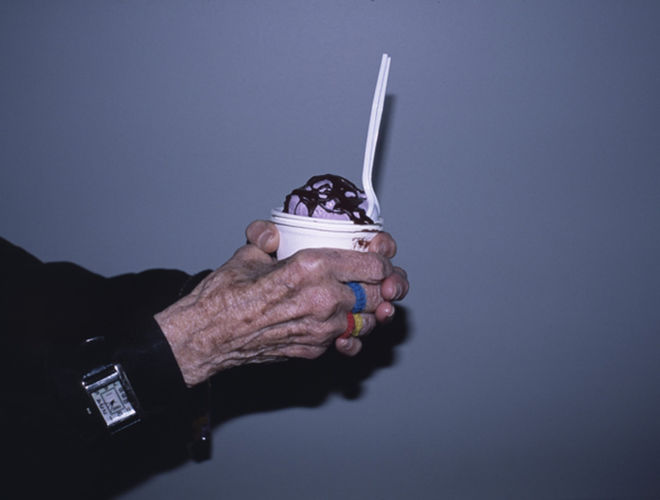 In the essay History Begins at Home, Meir Wigoder begins with the story of Stephen Bleyer:

Forty-nine years after the end of the Second World War, Stephen Bleyer walked into a bookshop in Montreal and came across a book of never before published photographs from the Russian archives… of concentration camp victims during the liberation of Auschwitz, he suddenly came across a photograph of a youth looking over his shoulder toward the camera… Bleyer suddenly felt faint and had to sit down on the bookshop steps.

Wigoder goes on to say how Bleyer discovers, by comparing the number on the arm of the emaciated boy in the photograph to the one on his own arm, that it was actually a portrait of himself, taken immediately after his release from the camp. The connection between photography and memory is electrifying in this case.

Three things strike me most about this story: the moment for Stephen when the boy in the photograph transitions from being simply an unknown Holocaust victim to himself as a boy; the act of finding a photograph of yourself in a bookstore (I am speculating here that Bleyer had no memory of it being taken and thus did not even know it existed); and the detail of the story claiming that he needed the comparison of his arm tattoo in order to recognize himself as himself.

When I first began to consider making a book of my photographs of Shirley, it quickly occurred to me that she might find herself in a similar situation: she could stumble across her photograph in a bookstore and recognize herself, literally see herself doing things and being places for which she had no memory, nor any memory of the photographs being taken, and no clue who the photographer is whose name is on the front of the book. I cannot imagine a more surreal situation to find oneself in, not to mention terrifying.

Photographing someone with the intent of putting the material out into the world is complicated even under normal circumstances. Working with someone with a memory disorder can be a minefield, even beyond the question of consent. Every day was a re-establishment of trust and consent, indeed on certain occasions, multiple times a day. I had internal debates about whether I should answer the same questions with the same answer. The working method is so disconcerting, I found myself subconsciously asking if this was merely a test of my ethics as an artist by some clandestine Photographic Principle Police Force. 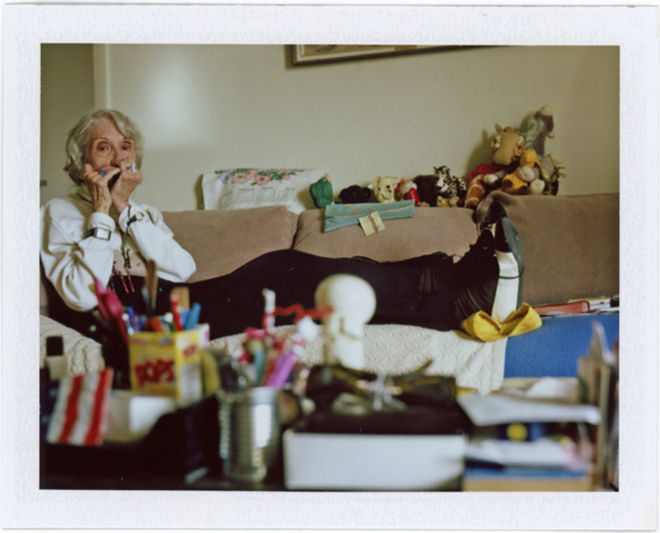 In the case of Bleyer, even if he had no memory of the photograph being taken when he was a boy, he at least had the advantage of being able to reason how it might have come into existence. He can further hold this reasoning in his mind for as long as he remains mentally fit. He will not be stuck in a loop of re-encountering the same material with the same panic and confusion, ad infinitum. Shirley once was thrown into a state of paranoia after discovering a birthday card in her apartment that had been sent to her by a family member, because she had no memory of receiving it. She wondered aloud whether it meant that the apartment had been broken into without her knowledge and the card left there by the thief.

In a way, we have all encountered photographs of ourselves for which we have no memory of the moment that they were taken – in our own family albums. We see a photo of a baby or a young child and we are told that it is us when we were younger. We may bear little physical resemblance to that person anymore, and have only the word of the family member narrating the viewing, who may themselves have not even been witness to the photographs being taken – yet, we accept the images calmly, well aware that this period at the beginning of our lives does not have trustworthy first person memories to be found.

In his essay Photography, Kracauer writes: "...in a photograph, a person’s history is buried as if under a layer of snow”. Barthes is able to put it in even more cryptic terms, assigning this phenomenon with the title "flat death" and going further to declare, "…not only is the Photograph never, in essence, a memory... but it actually blocks memory, quickly becomes a counter-memory".

This is, I argue, the most widely accepted stance on the issue of photography's effect on memory: only one can survive.

The growing awareness of Alzheimer's disease and dementia has shaken the foundation of the public's opinion of memory as reliable for storing and relating to reality. This awareness has occurred after the theorists listed above wrote their statements regarding memory and photography. The entire digital revolution has also occurred, bringing with it a host of other memory competitors' in the form of computers, smart phones and social networks. The irrationality and unreliable nature of our minds has never been more self-evident. We live in a time when we must depend on external devices to function as a part of a society that demands a more structured and systematic level of awareness, recollection, and concentration. We rely on our devices to provide for us mentally and, in the case of photography, frequently use our devices to orchestrate the memory we would like to have.

The majority of the photographs that attempt to preserve an event in the spirit of remembrance adhere to this game of manipulation. It is so common that the subject knows the rules instinctively. We hold up the fish we caught with a smile, we put on a sad and defeated face (in the over-exaggerated style of a silent film actor) while standing beside a car stuck in the mud, hover over the birthday cake candles in the pose of fake blowing, without a thought about it. 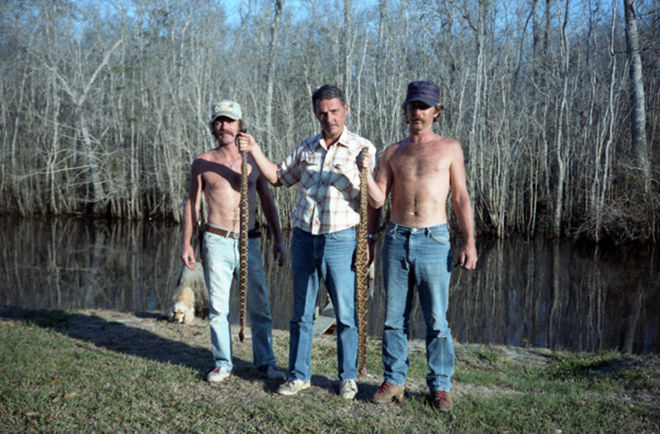 It is hard to say how these events would be remembered if no camera had been there to record them, because the moments recorded in the pictures would never have occurred at all without the culture of photography. The end result is an image documenting the act of striving to preserve an occasion, for communicating the present to others in the future, broadcast out with the expectation of viewership. If, upon viewing it, we believe it to be representative of the time when it was taken, we forge the same relationship with the image as we would with our memory: suspension of the awareness that what we are viewing or ‘remembering’ is in fact a fake, scripted during the moment in order to cover the moment, an internalizing and reassembling of reality. In this way, the camera plays a benign role, our actions and intentions being the key players in the game. If anything, these photographs preserve our unique understanding of and attitude toward reality, much in the same way our memories do, more than so-called ‘slice of life’ photographs.

In the case of Shirley, there is another key difference between when we, as ‘neuro-typical’ adults, see a photograph of ourselves as children (or even as an adult) with no memory of the picture being taken and when Shirley sees a photograph of herself only a short time later. We can assume the origin of the image, can accept its existence by summoning up other memories and creating an origin story for ourselves of how, when, and why it was made. In short: the memories we have allow us to accept that we do not remember everything. Perhaps it can also be said that the photographs we have allow us to accept that we cannot photograph everything.

Jim Reed published his book Working Memory as a handmade first edition which has now completely sold out. He has now begun to work on a second edition.