Revealing the Gaps of Reality: An Interview with Sophie Kahn

Brooklyn-based Sophie Kahn (1980, UK) is a digital artist who sheds a light on what it means to photograph life and the human body. Kahn combines cutting-edge technologies like 3D scanning and printing with ancient bronzing techniques, resulting in works that reference monuments, glitch, memorial sculpture, loss and decay. With a background in art history and photography, Kahn critically engages with historical concepts within the world of new, technologies. In this interview, she talks about her process, how technology tries to imitate life, and how it’s better not to be an ‘expert’.


You started working with digital art in the early 2000s - how did you start?


Once I graduated from my undergrad back in 2001, I started doing a lot of architectural photography. At that time most architectural photography was in the style of Andreas Gursky and Thomas Struth; artists that worked in extremely large format, with a god’s eye point of view and very disembodied style. I was always more interested in photographers like Diane Arbus and Robert Frank; people who were making photography that was kind of ‘on the ground’ and had a more straightforward approach. I was getting increasingly fed up with traditional photography, and felt like I wanted to try something different. I noticed how a lot of architectural businesses were starting to use 3D rendering. As an artist it was very exciting for me to have this technology where the past and the future of a space can be imagined and transformed. I enrolled in this course called Spatial Information Architecture and they had a 3D scanner and printer…and that’s how it all started!

How did you go from scanning spaces to scanning people?

A lot of the time the scanner would just be lying around, so I decided to start experimenting with it. I started using it on my body, which was interesting to me because it isn’t designed to be used on a living, breathing subject. It was an immediate artistic discovery for me: when you scan a person you get really crazy results and glitches, that are different every single time.


Yes. I like the idea of taking a device and misusing it to expose what it was not designed for. It’s a thing that artists have been doing for a long time, where they look at the design of something that we use to see what it reveals about the worldview.


I also 3D scan the works of other artists and designers, where I need to scan ‘correctly’. I had to learn a whole new set of skills! But I think there’s a real danger to becoming too much of an ‘expert’ with the tools that you use. I feel like you become too afraid to do things like experimenting and making mistakes - because you know that something is a bad scan or a bad rendering. Whereas somebody who was just coming in like I was, you just play with it and you’re much more open to things that come out of it. I feel like my better moments as an artist have been when I didn’t really know what I was doing.

What was it about those glitches that appeared when you scanned a person that fascinated you so much?

First I saw the glitches as manifestations of what the human eye can and can’t see. If you were to look at all the things around you, you think it’s complete because you’re looking at one moment - but you don’t see the things that are hidden. When you make a scan, those gaps are revealed since it’s made from a single perspective.

Another thing is the idea that you see an unintended emotional resonance that comes out of technology - and that’s something that I think is at the core of my work. It’s the fact that people try to simulate life, but fail to capture its essence. The glitches make people aware of how odd this action of trying to imitate life is. The scanner doesn’t capture any colour nor does it capture anything moving; so everything looks like it’s dead, or a death mask. There’s this weird, haunting, ghostly aesthetic to everything that gets made in the digital software. I was also always really interested in death and loss and memorial, and the idea of photographing something haunted. So, to me, it was about my way of bringing in those interests to this new medium. 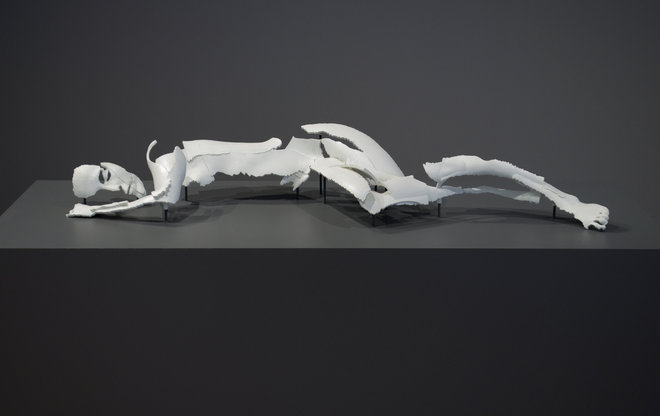 Your images originate by light being captured in a lens - some argue that that’s the definition of photography/a photograph. What do you think about that?

I always felt that it was a deeply photographic work, because the tools are just that: there’s a virtual camera and lighting, and it’s sort of like having this incredible virtual photo studio but you could do anything that you could imagine. When you see the process, you can see that, when using the scanner, it seems like you’re almost painting an image. Instead of a camera that captures the whole frame at once, you make a decision in terms of what you capture and what you leave out.


This video shows what Sophie's scanning process looks like.

You then transform your scans into actual sculptural objects. Could you describe your process?

The scanning itself is a very personal and intimate experience. I work with models sometimes, but because it’s so ‘in your face’, I tend to scan my own body. There’s also a sort of ‘power’ aspect to scanning another person as well. Because they need to keep their eyes shut as they’re being scanned, the image is revealed to the person who’s scanning but isn’t revealed to the other person until much later on.

To create the objects themselves is a very slow process; it takes weeks to sculpt the digital file, then it’s got to be made in a factory, go to a foundry and ultimately it has to be hand-finished. Most of my sculptures are casted with ancient bronzing techniques, because it always felt important to me that the work would be made in something other than plastic. It’s a struggle sometimes though, when it’s such a production, to keep a kind of immediacy to be able to stay creative and keep on making more work.

How do you find that immediacy?

When I first started out it was really hard to get regular access to 3D printers, so in the meantime I made still renders, and did a lot of video and print work from the scanner. I think that in that 2D work I found that immediacy. There, I get a result right away; I can change the colour, size and light source with a click of a button. But that’s always a struggle - a painter can change the paint on a canvas without a lot of trouble, but then again, everything isn’t outsourced as a painter. 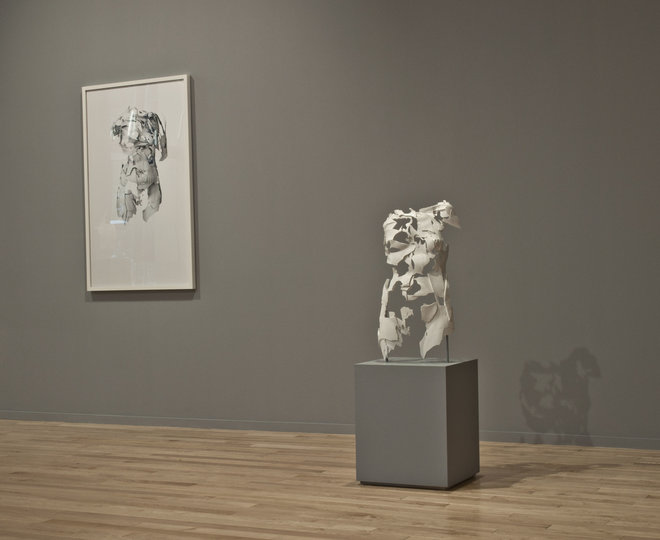 Fragmented Torso, shown as a 3D sculpture and 2D print in the same space. © Sophie Kahn

Because you scan yourself most of the time, a big part of your work is based on the female form. Do you think that is an important aspect in your work?

I’ve always been interested in women making images of themselves through photography, as well as how technology has been used to capture and codify the female body. In the history of photography, I found that there’s a lot of theory about the power of that, and how that power was mostly given to male gaze instead of that of the female gaze. So for me to turn the lens to myself felt important, and it also felt like a semi-political statement.


In my new work about hysteria, which I’ve been working on for the past couple of years, the female form is an especially important aspect. When you look at the history of hysteria, you see that all the patients at the asylum were female - whilst all the doctors that were photographing them were male. When the pictures were made at asylums like Salpêtrière it wasn’t an idle snap; it was an image of a person in extremis, somebody who was in the midst of this attack.

It sounds like a very violent piece of history - how are you translating that to your work?

It’s an interesting history to be working with and particularly to be thinking about imaging the female body, and madness, which is this un-imageable thing. So I try to critically engage with all of that. There is this violence that the scanner does to a body; the form is completely fragmented, as if it were smashed in to the ground. It’s very upsetting to look at. These bodies, or fragments, are damaged, broken up and dead looking - so it’s very upsetting to look at. The violence in that presentation was my way of bringing that history into these works.

Because the works are so fragmented, a lot seem like they’ve been excavated in some kind of an archaeological dig. Can you elaborate on that?

My parents are anthropologists so I grew up going to dusty little museums with weird objects. Because of that I definitely have an affinity with that kind of experience; I love the idea of my work being in a museum with no information or context, and for them to confound everyone who comes across them.

My interest and excitement in creating objects is in the contrast of the action: taking something that’s incredibly immaterial and infinitely mutable and changeable, and then fixing it in place and making it very permanent in bronze - which will ultimately outlive us all.