Rencontres ends, once again. And as the smell of a thousand spilled glasses of wine dries on the pavement in the heat of the sun rising over the south of France, photographers wake up, or rub their eyes having never gone to sleep, to begin the return journey to the far reaches of land that make up their geographically disparate, remote lives. Though we keep in touch year-round by emails and chats, exchanging ideas and images, and meet intermittently at festivals, residencies or overlapping destinations, the photofestival of Arles is like a homecoming, a North Star, a gravity. For one week in Arles, the reality of space acquiesces, and the wide distances are flattened, as we come together and speak about where we have been and where we will go to next, what works we’ve produced and what creative challenges are occupying us now.

In an ancient small town that’s predominately hugged in by the river Rhône to the north and the Boulevard des Lices to the south, hardly a half a kilometer in area, much remains steady from one year to the next. Hot days are spent seeking shelter in the shade, whether in the cool stone buildings that make up the historic centre, where many of the exhibitions are hosted, or under the awnings of the cafés on the Place du Forum.

A walk down a long, dusty path delivers you to the Atelier, serenaded by the cicadas. There, I find myself in wordless awe when viewing the exhibition of Laia Abril’s series On Abortion (published in part in GUP#49, the Intimacy issue) – a powerful, cutting installation of texts and images, circling a visceral pile of wire clothes hangers, tangled. On the final night of the the festival screenings and talks, following a train-wreck of a poetry reading by PJ Harvey of the collaborative work she did with photographer Seamus Murphy, Abril is also honoured for her exhibition as the first recipient of the Prix de la Photo Madame Figaro. Also celebrated that night are the winners of the Photo Folio Review awards: the nominated shortlist features five photographers, including Maija Tammi (shown as a portfolio in GUP#46, the Community issue) and Karoliina Paatos (featured online), though the prize goes to David Fathi for his series Wolfgang (featured in GUP#48, Mixing It Up). And though I celebrate the success of the photographers whose work I already know, Rencontres d'Arles creates a space where I can always find some work or some photographer sublimely unknown to me.

It is the magic of pulling many, many creators into a playground designed specifically for them.

The structure of the festival – exhibitions, portfolio reviews, screenings – lays the foundation for art and inspiration. That’s obvious. Yet, it’s the ephemeratica that are enabled by that structure, which truly create the grandeur of Arles. It’s running into Natan Dvir again and again on the side streets and having a sandwich on the inner steps of Hôtel de Ville, while he tells me about his latest work and feeling done with New York. It’s having an ice cream in the sunshine with Alvaro Laiz and hatching moneymaking schemes for photographers. It’s sitting with Pierre Liebaert at a cafe on the Forum, the same one where we met one year ago, as he tells me about a photographer he admires. It’s watching Matjaz Krivic descend into an increased state of ecstatic madness as the night gets darker on Republique, the professional photographer transformed into ancient beast. 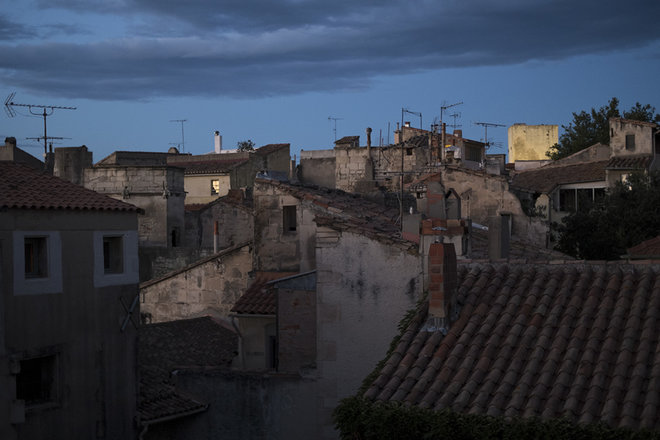 It is the magic of pulling many, many creators into a playground designed specifically for them. A playground, we remember, is one of the first and most sacred of places for meeting on equal ground with peers, and learning, joyously.

I never lose sight of it, the magic, because it comes and goes so quickly, and then we’re gone again, moving away quickly through space. Through the week, we sometimes mention ‘home’, that strange notion of a place that, when it comes into conversation carries an abstracted romanticism, a wistfulness, the speaker growing starry-eyed while admitting its unattainability, its unsustainability.

I never lose sight of it, the magic, because it comes and goes so quickly, and then we’re gone again, moving away quickly through space.

As I go to the train station on Sunday morning, for the trip back to my own ‘home’ in Amsterdam, starlings dive over the amphitheatre, crying, and photofestival posters warped and faded by the heat start to peel off the walls, corners blowing barely.

It’s more mythic than mortal. It’s Bacchanalia, it’s Valhalla. Walking away, it feels like Xanadu: the only place worth being, somewhere that you could spend the rest of the year desperately trying to get back to. It’s true, but then again, it’s also just a mirage. “Is this real? Did that happen?” I ask, pointlessly, to Karoliina, Maija and Nikolas Ventourakis while we wait together on the platform for the train to Paris. It’s all a blur, a fervour. It’s a fever dream. The train arrives, and reality already begins to seep in through the cracks of the crumbling Fata Morgana. Soon, we will be back to our lives. Back to producing our work.