Privacy was once precious, or so the recent exhibit at the Shirn Museum in Frankfurt would have you believe. Martina Weinhart, in her essay included in the exhibition catalogue, says that "Today, the antithesis between private and public seems to be completely undermined, and the metaphorical walls, fences or hedges are less high and more easily surmounted".

When it comes to proclamations that privacy is not what it used to be, I tend to err on the side of David Byrne: "Same as it ever was"... Consider, for instance, The Pillow Book, written by Sei Shonagon sometime before 1000 A.D. She was a geisha working in one of the many feudal palaces of Japan at the time. In her book, she reveals not only many personal details of her own life, but also the secrets of others surrounding her in a world strictly ruled by codes of conduct and honour -- all in explicit detail. Whether or not she intended this book to be read by others is debateable, but regardless of that, it is read today, and its survival is a testament to the fact that for as long as language has existed (or perhaps even longer) privacy is a futile game at best. At worst, it’s completely imaginary.

Is there even a difference to be found between written words and images? Do images assault the hidden, the reserved, the private and protected corners of reality with more force? Many of the images in the Privat exhibition are sexual in nature, whether they depict sex itself, simply nudity or some kind of sexual posing. This would seem to suggest that sex exists, or used to exist, as the foundation of privacy. Brought together in the exhibition were polaroids of Dash Snow, cataloguing his drugged-out sexual exploits and party lifestyle until the time of his death in 2009 from an apparent overdose, and a film by Stan Brakhage, poetically titled Window Water Baby Moving, showing the birth of his first child.

Brackhage’s film shows his child’s birth in the same way that Warhol's famous film (also included in the show) shows sleep: you simply see a baby being born. Yet, while Warhol's film is a single continuous shot, Brakhage's is cut to pieces. Hardly a second goes by without an edit to a different piece of footage. Through these blips of time we see the day's events prior to the birth: his wife bathing before going into labour, her water breaking, the birthing of the child, and shortly thereafter, the passing of the placenta. These things are simply shown for what they are, but edited in a way that attempts to recreate the fractured reality of memory and perception. It's moving, gross, intense, beautiful and transcendent. Overall, it is an amazingly good approximation of how it feels to witness your own child being born. 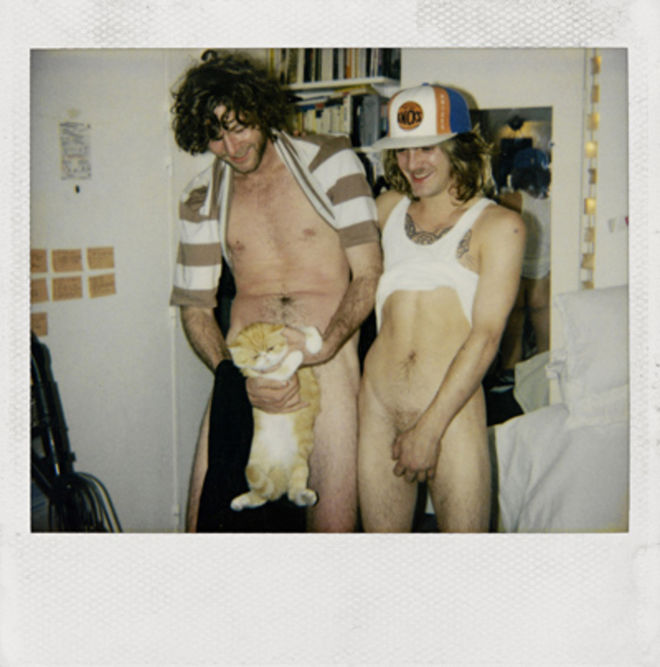 
In contrast, Snow's photographs represent something of an Ouroboros  -- his work simultaneously attempts to both document and create a desired lifestyle. The blissful energy they contain may pump you up or make you laugh, but I don't see how his choices for photographs – whether of a girl giving him a blow job or his friends doing cocaine next to a birthday cake – are supposed to be a bomb strapped on the side of privacy, or even a document for reality. Nan Goldin, whose work was also in the show, is to me a better example of an artist presenting a more complex and interesting testament to partying and living hard.

Whatever your taste, making images of birth, sex, nudity and the like is nothing new. While it might be interesting to curate together some notable depictions of these things since the advent of photography, I do not think you can thus build a case for the claim that we live in a post-privacy world. These works show an artist revealing an excerpt from his or her own life. To find this shocking in and of itself seems simply naive. Furthermore, how does it affect the overall picture of privacy if another person willingly puts out into the world a picture of themselves naked, having sex or giving birth to a child?

To me, this is another example of how the photographic image is still largely believed to be a greater representation of reality and the truth than a painting, sculpture or a written description. Now that images are increasingly ubiquitous, and indeed perhaps more ubiquitous than language, it is only a matter of time before photographs are not perceived as any more dangerous or powerful than their linguistic equivalents.

We are ticklish in the places on our bodies that are vulnerable to attack, and equally defensive in the areas of our lives where we feel vulnerable. Privacy most often is an attempt to keep these areas safe from attack, both physically and socially. With Warhol's film about sleep, part of its power comes from the plain reality of showing something so simple and necessary in our lives, but it also pushes a lot of buttons relating to privacy by a perceived invasion of an individual's vulnerability with a camera.

Warhol came to make the film when, one night, the man in the film (Warhol's lover at the time) discovered Andy in his apartment watching him sleep. He asked "Andy, what are you doing here?" and was answered, "Gee, you sleep so well." Then Warhol got up and went home with the idea to make a film (more than five hours long) simply showing a man sleeping. If Warhol reveals an invasion of privacy, which act is the real intrusion: breaking into another man's apartment and watching him sleep, or his re-creation of the event for the camera? 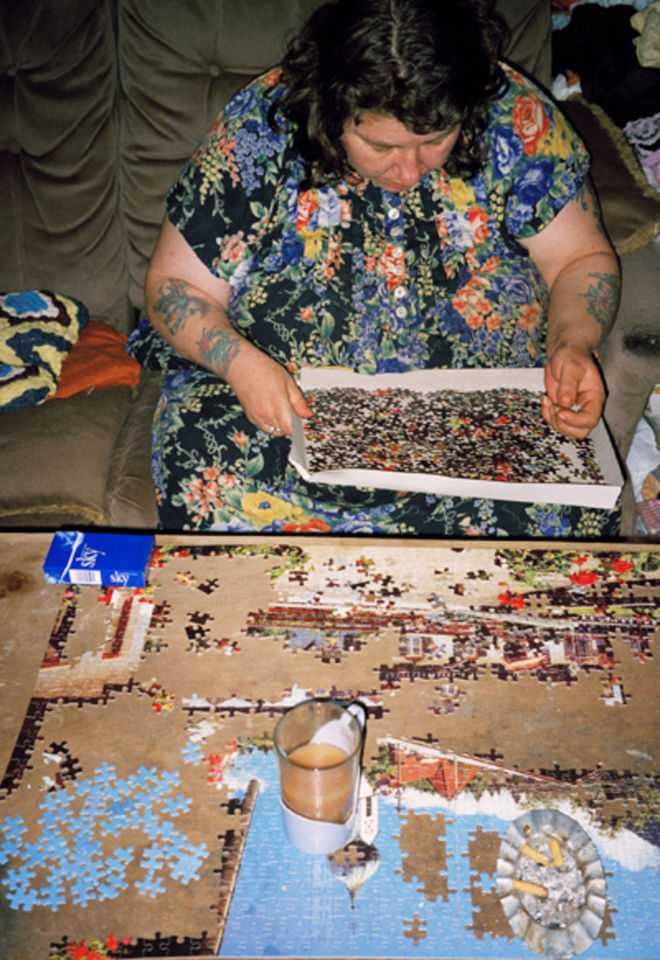 
Many works in the show had another thread connecting them together: they move into familial territory. There are photographs that Marilyn Minter made of her drug-addicted mother, photographs from Richard Billingham's famous series Ray's a Laugh, and most notably images from the infamous series Pretend You're Actually Alive by Leigh Ledare. This work shows Ledare's mother over a long period of time with an emphasis on her sexuality and their loving, tense, and sometimes mutually destructive relationship. Ledare photographed his mother having sex with a number of men, mostly younger men around his own age. She also poses for him nude in highly sexually explicit, arguably pornographic ways. In an interview in the catalogue, Ledare talks about the complex family dynamics that created the relationship between him and his mother. Overall the work is, similar to the Brakhage film, gross, fascinating, intense, moving, and highly emotional. In the context of issues concerning privacy, this work jabs a firebrand into the nerves of anyone who values privacy, or feels that we live in a post-privacy world.

It does so perhaps precisely because the actual core of the so-called ‘need for privacy’ stems from the desire to separate family and sex. Ledare's work is certainly not the only time in history that this taboo has been breached, but is rare as a document of a mother inviting her son to be witness to the sexual side of herself as a person. It may be that this suppression of sexuality in the family is in fact pushing forward so-called provocative art. How is the youth movement to destroy privacy connected to their frustration regarding their own family secrets? How much is it simply an initiation test to see how much of yourself you will bare to others?

Thus we arrive at the willingness of children to share their sexual lives with their parents and the rest of the world. Evan Baden's Technically Intimate shows young girls photographing themselves with various digital devices (cell phones, webcams, etc.), all viewed with the assumption that the images these girls are generating will afterwards go out onto the internet. While the internet does make the distribution of images and text faster and more convenient than before, I am again not so quick to say that it fundamentally changes the rules of what is private and what isn't. Nude portraiture and indeed nude self-portraiture has been going on for quite some time, in various forms.

Going back to the geisha Shonagon’s The Pillow Book, there is speculation about where its name comes from. Some say it is because the author kept it under her pillow to keep it a secret (i.e. private), but others say it relates to a story in the book. The author's master, The Empress, was one day presented with a spare bundle of paper. She wondered aloud what could be done with the pages. The author, a somewhat out-spoken geisha, replied "It would make a good pillow". So, it was given to her to use accordingly. She chose instead to use it for another reason entirely, namely, to record lists of her favourite things and the dark secrets of those around her. You can claim that the technology we inherit is misused, or perhaps instead, that it’s naive to believe that a person would use a bundle of paper as a pillow instead of as a diary.