Pride: An Interview with Parisa Taghizadeh

For her series BOY, Parisa Taghizadeh photographed a young boy and the fairy-tale world he's created for himself, filled with things that are typically associated with girls: glitter, nail polish, jewelry, pink. Having not yet reached the age when he's concerned with gender roles and gender politics, the boy plays within the liberty of childhood – a liberty that will all too soon be shaped by external expectations. Taghizadeh recently won first prize at Pride Photo Award 2014 for her project BOY, and she speaks here with Katherine Oktober Matthews about the baggage and complications of photographing your children, and pride of all kinds.

The boy you photographed is actually your son, though that's not necessarily apparent in the pictures. Tell me how the project got started.

My young boy, when he was about 5 or 6, used to particularly like dressing up as a girl. I mentioned this to a friend of mine, who happens to be a documentary filmmaker, and I remember her saying, “Now that would make an interesting documentary project." It sat in the back of my mind for a while and I thought, you know what, this whole thing is probably going to change. Once he goes to school and the social restrictions start to come in, all this 'role playing' will affect his ways of expressing himself. So, it was a good time to start documenting it. Every time he would play with little sparkly jewelry things, I'd just get my camera out.

I witnessed him doing it from a very young age, and I actually remember coming home to find him with another friend's daughter and they'd been playing dress-up. All the boys were dressed up as Batman or had swords and what have you, but he was all dressed up like a fairy, like a Disney princess, with little Disney slippers (laughs). I mean, he looked quite ludicrous, because you could tell it was a boy dressed as a girl – pink lipstick, all made up on the face. And it never stopped. It carried on for a good 3-4 years, so I knew that this was really in him, and I thought it would be a great documentation, observing his little theatrical world.

Every parent with a camera photographs their children – how did you approach the project in order to achieve something more significant than 'pictures of my son'?

I really didn't want to fall into that trap of the photographer that photographs her children – there had to be an objective perspective onto it. We deal with sentimentalizing children in photography anyway, so I think really, as an artist, unless you have something interesting to say about childhood or a child, then your pictures will always just fall into that place where they're just pictures of your kids, no matter how beautiful they are. Because if your intention is for the world to look at them and say, “aw, that's so sweet," then you're just doing what any mother does. You're not being objective enough as a photographer to actually step back.

You know, we're image-makers, we're communicating in a visual culture. It's not going to be just 'people who like kids' who are going to look at these images. I do also want them to make people feel somewhat uncomfortable sometimes.

A lot of people tell me they're very tender, caring pictures, and I think they are – because obviously that's my relationship with my child – but I wanted it to be somewhat disconcerting as well, because that's what makes it worthy of debate.

The images definitely have a tenderness to them, but I don't think it necessarily has to be seen as a maternal tenderness – the first time I saw the images, I didn't know he was your son. How have you balanced the intimacy of the project with the intimacy of your relationship?

It is quite a tricky one. I thought about it quite a lot, as to whether or not I even want to mention that he's my child. I've been really particular about not wanting to expose his name, not because I don't feel like it's safe, but because it's not about the identity of this particular child. So, really, it doesn't matter that he's my child.

But, somehow, it seems to be the thing that people really like to talk about, this really lovely tender relationship between the mother and the child. It's not important that he's my son, it's important that he's a boy that likes to dress up as a girl. That's what it's about.

Well, that's true, but I think what Simon Njami (the Pride Photo jury chairman) said at the awards ceremony is also true: it serves as evidence that you as a parent are not judging him, telling him 'stop that' or enforcing on him some gender expectation. That's an additional piece that we get from these images knowing that it's a mother photographing her son.

That's a very good point. I actually didn't think about that before, and that really only came into play once it entered the Pride Photo Award, where it became about not oppressing a child's freedom to want to be who they want to be, whether they're gay or straight. So, that seems to be an extra layer that's entered the realm of the work since it's been associated with Pride.

I think the layers are quite important, and at the same time they're not. I guess the message is also that I really didn't want to shame my child. Perhaps by taking pictures of him, I helped him to not feel shamed by it. 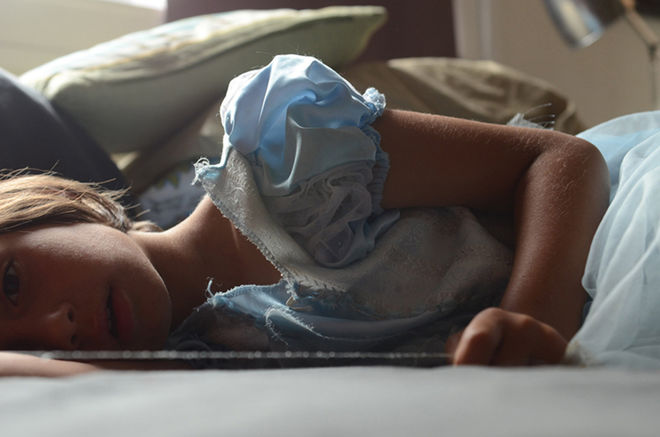 The images do always show him by himself though – is there a reason for that?

The honest answer is that I was getting the best shots in a controlled environment. Because there were many times that I would find him sitting with a female friend, both of them dressed up in fairy costumes. There were two issues with that. Firstly, it almost looked a little too obvious, spelling it out a little too much. Secondly, it was because when it was us alone in the house, it was much easier to control the situation: the lighting, the setting and somehow work with it being set up. People often say he looks very pensive and lost in his thoughts, but really, he was just alone in a room with mum.

Might there come a time when he's embarrassed by these photos? How do you hope to help him understand the message or the significance of what you're doing?

You know, we're coming to that point now, because these pictures are now in the public domain. There's definitely a lovely sense of pride when I show him pictures of the posters out in the street. He loves that. The picture has now, not just for him but for our family, become a bit removed from us now. It's really no longer about what it originally started out to be. It's gone out into the world into a different context and developed a life of its own. So, I don't really think he looks at that anymore and associates it with himself.

I was thinking last night, when we were at the opening, what it would be like if he was here right now. I wouldn't put him in that environment. I wouldn't. It's imposing too much of other people's perspective on “the issue".

I wouldn't take him to an exhibition where all the pictures are up on the wall, and I certainly wouldn't suggest that he brings his friends to look at them either, because he'd be embarrassed. He would actually be embarrassed. But he has taken the poster image to school and showed it to his teacher. It's not an overtly girly picture.

Showing off the picture is a way to be proud not just of himself, but also of his mum, who's an award-winning photographer.

That's right! And it works on many levels, and I think that's all contributed partly to this sense of separation that's happened with that image and our family. 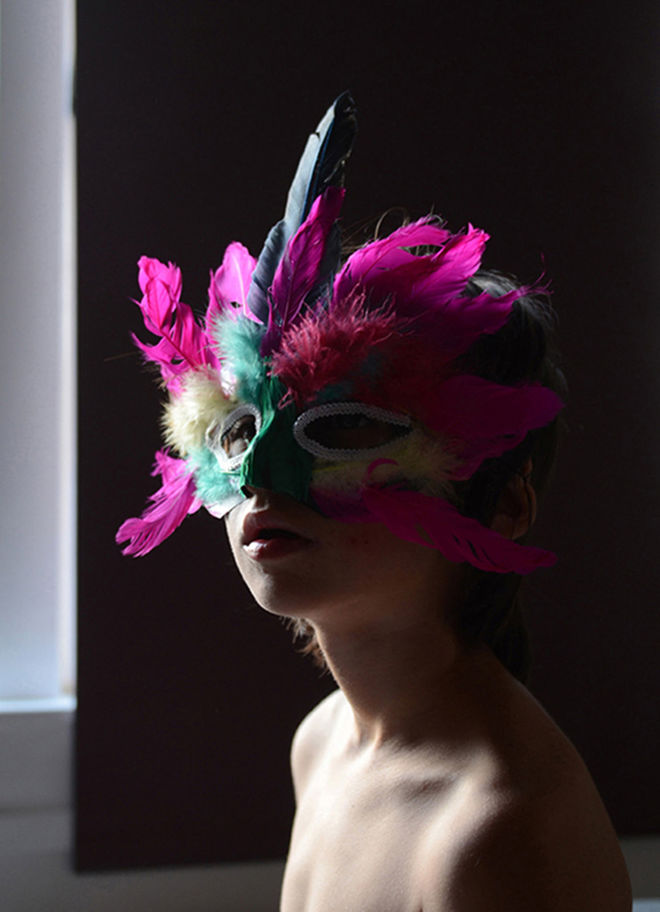 Does it change your own viewpoint of the project to see the images of your son hanging in the exhibition, and even used as the promotional poster for Pride Photo?

Yeah, it's totally changed. Like I said, it has developed its own life. It's not really in my hands anymore, and I'm totally okay with that. That's part of our mission, to get the work out there and to get those conversations going about them, in a variety of contexts, not just in your own little bubble.

What conversations have you heard going on about BOY?

At the opening, for example, the emcee asked me about the ethics of photographing your child. That's a massive debate, and I haven't figured that out yet, to be honest. It's one of the issues that came up when Pride contacted me. My husband and I were talking about it, and both of us were just like, “Man, this isn't cool, for us to be taking pictures of our kid and plunking it in an organization which is not his cause – because this isn't his fight – it's not fair on him." That's definitely an aspect of it.

But, what made me change my mind about it is the thought that organizations like Pride are really quite important, and progress comes from radical thinking. I would feel very proud to think that, whether he's gay or straight, I'm raising my son as a person who would support something like that.

To see more images from BOY, see our online portfolio. The series can also be viewed at Pride Photo Award 2014 in Amsterdam, on display at the Oude Kerk until October 26.