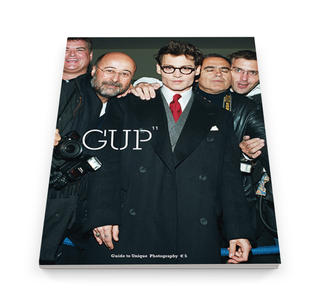 At first glance one might describe the works of Koos Breukel as ‘classical’, even ‘old-fashioned’. Almost everything looks ‘classic’ in his photography: the genre he chooses to work in, portrait photography; his cameras, ranging from old-fashioned to very old-fashioned; and the traditional way in which his beautiful prints are produced. Only his subject– contemporary people – is modern. Or, better yet, timeless, because Koos Breukel (The Hague, 1962) is one of those rare photographers who knows how to capture a subject’s authentic state of mind.

The technique Breukel uses is essentially comparable to the method used by portrait photographer Nadar, who practised his profession in Paris around 1850: in particular the large studio camera, which forces the photographer to work in a slow and concentrated manner. Another important similarity with Nadar is the way in which Breukel deals with more or less famous contemporaries. Both Breukel and Nadar produced portraits of public figures such as politicians, visual artists, writers and fellow photographers. And in many cases, they became acquaintances and friends with whom both photographers had an informal and open work relationship. This mutual trust is essential to Breukel’s photography, especially in the series he made of traumatized fellow human beings, such as the one about the survivors of the Faro plane crash in 1992. While recuperating himself from a serious traffic accident, Breukel saw the survivors of this crash on TV arriving at Schiphol airport. Covering their heads with jackets, they were rushed past the waiting press photographers as quickly as possible. The notion that the sadness of these people had to be kept hidden, intrigued him to such an extent that he embarked on a lengthy search. In the late nineties, a number of them allowed Breukel to make portraits of them. The suffering is visible in these pictures, but more than that they also reveal how the different survivors processed this suffering.

There is thus a strong link between living and working in Koos Breukel’s oeuvre. Two of his best friends died of a terminal illness. He closely followed and photographed their final years. This resulted in pictures where sadness and love are presented in their purest forms. They are photos that leave no one untouched. Breukel also has a contrary side. About fifteen years ago, he was commissioned by the business magazine Quote. In order to get a manager or a minister to open up, he sometimes played jokes on them. The director of a mail-order company, for example, once kept him waiting for a long time. Together with his assistant, Breukel moved the contents of the director’s entire office into the corridor, so that the man couldn’t hide behind his imposing desk during the shoot. Following a comment by Breukel, former Minister Ruding began to polish his glasses, which is exactly when Breukel took the picture. And politician Hans Wiegel sent him packing after he took a cigar out of the politician’s mouth.

Wish list
Nowadays, Breukel almost exclusively photographs self-selected projects: the personal story of one or more individuals, which he thinks should be seen. When I asked him who he would still like to make a portrait of, he thought about it for a while and narrowed it down to three names. Irving Penn, the perfectionist portrait and fashion photographer is the first name on his list. The second is June Newton, Helmut Newton’s widow, who compiled her own oeuvre of photographs under the pseudonym Alice Springs. And finally Leonard Cohen, the musician and poet, from whose work he borrowed a number of titles. Breukel also reveals that he would have liked to make a portrait of Claus von Amsberg because he thought he was by far the most interesting person in the royal family. The character of Breukel’s photos has gradually evolved through the years. The portraits have become more serene. Unusual details or revealing gestures, which can be found in some of the older portraits, have disappeared. It seems as if the compositions are becoming increasingly simple while simultaneously gaining in intensity. Breukel will be the first to admit that it is impossible to expose the human soul in 1/125 seconds, but he is becoming more adept at finding the moment in which subjects show an authentic emotion. Breukel’s classic portraits are part of the great tradition of photography. His subject, the mystery of our existence, is timeless and therefore also very contemporary.

Among Photographers
Until September 30 of this year, the exhibition Among Photographers will be running at the Museum of Photography in The Hague. Breukel also reveals himself to be a photography enthusiast in this exhibition. He selected 58 portraits which he took of fellow photographers through the years and paired each of them with a single photo by the photographer in question. In the first of the four rooms, pictures are exhibited by photographers who inspired the young Breukel to become a photographer. It contains his portraits of Ed van der Elsken and Gerard Fieret, personalities whose obsession with the medium served Breukel as an example. In the fourth room, American greets Robert Frank and Richard Avedon are given a place of honour. Just like Breukel, they photographed people from their immediate surroundings, in a way that is almost painful in its honesty. In about the centre of the exhibition there is a portrait of Philip Mechanicus, a photographer that Breukel has started to appreciate more and more in recent years. It is a superb, tranquil shot of a fragile Mechanicus reading a letter in his sickbed.

Want to see more of this photographer's work? Look at Breukel's portfolio.