On the Move: An interview with Anne Ruygt, photography curator at Stedelijk Museum

Telling stories through photography is becoming a more complicated affair, going far beyond showing pictures on a wall or in a book. The Stedelijk Museum in Amsterdam takes note by hosting the exhibition On the Move, a group show focusing on the theme of 'Storytelling in Contemporary Photography and Graphic Design'. We spoke with Anne Ruygt, junior curator of photography at Stedelijk, about the rapidly changing landscape of photo-based media.

Why the theme of storytelling for the exhibition? Does a photo have to tell a story to be a good image?

It’s not actually about the story, but the method of storytelling. The main focus of this exhibition is photographers using new platforms, thinking about what medium to best present their work.  And it still can be just a photo on a wall to tell a story in one photo. For instance, the work by Elspeth Diederix – that’s not a journalistic story, it’s not a photo essay, it’s really about one singular image that has a story inside of it. It’s more of a suggestion, than ‘storytelling’.

Will the future of still photography be multimedia?

No, but I think it’s an interesting path for a lot of photojournalists – for people that used to print their photos in newspapers and magazines. Those spaces are limited; you can’t just go up to a newspaper anymore and say "I want to do a photo essay about this subject" and get a 10-page spread. For a lot of photographers coming from that part of the photo world, I think it’s really interesting. For instance Kadir van Lohuizen, or Rob Hornstra and Arnold van Bruggen – they're using the internet to communicate with their audience in a different way, and not having to rely only on a newspaper or magazine that wants to publish their work.

There are quite a few photographers working with found materials, or presenting edits of work. It seems like the role of photographer might be increasingly seen as more of an ‘author’ rather than ‘recorder’.

Yes, a lot of artists are using found footage from the internet. In some cases, they use it as an editor, for instance using images from civilian journalism as something added to their own work, as in the case with Robert Knoth and Antoinette de Jong. In other cases, the found materials are a subject. For instance, in Thomas Kuijpers’s work #IDIDNTJOIN, the images shared on Twitter are really the subject of this work. He’s asking: What is amateur journalism, who made these photos, what can I do with them, and can I add my work? That’s more of an artist’s way of dealing with the material as a subject.

But, all of the work we selected, the 28 projects, are all by 'authors' – that’s the position of the museum. We don’t collect web sites, we don’t collect photos, or photo books – we collect makers, we collect artists. So, it’s a different way of thinking of the work: it’s not the medium, it’s the artist. 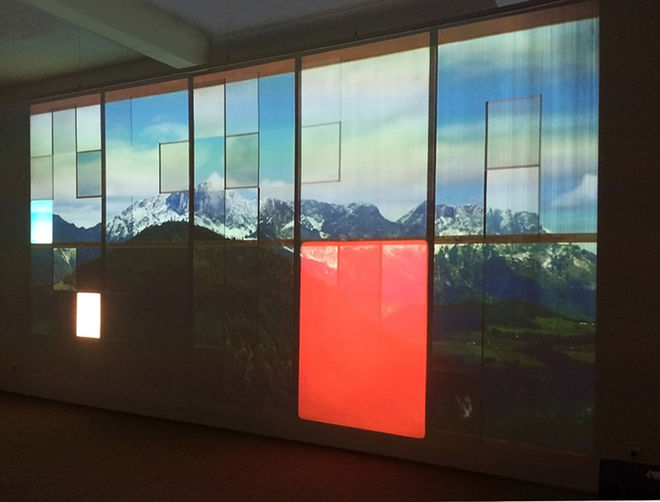 The works in the exhibition are chosen to relate to the theme of storytelling, but it’s also related to the museum's art acquisitions. Can you tell us how those two things connect?

It's a tradition that Stedelijk Museum has been organising for a long time. It’s a project funded by the city of Amsterdam, and we do it every two years. The special thing about this project is that it’s an open call, but it’s always in conjunction with a specific collection that we have, in this case photography and graphic design. It starts as an exhibition, and then the artistic director of the museum makes a pick for works we acquire for the collection.

So, it’s a two-way project: on the one hand, it’s about making an exhibition with a lot of new work and on the other hand, we have the acquisitions, which means that we can acquire a lot of new works at one time for the collection.

Do those two goals – acquisition and exhibition – complement each other, or do they ever work against each other?

Well, exhibiting work is always different than acquiring works, because you make a different selection. For acquisitions, we want to follow up on our existing collection and the existing clusters of work, and bodies of work that we already have. You’re always looking at it and asking: “Okay what do we have, and what would be a nice link?” A collection presentation later on is going to be different than an exhibition about it now.

Since the call for submissions was limited to artists working in The Netherlands, what do you think that these projects say, collectively speaking?

What you see here in this exhibition is that we have a really strong tradition in photography education, in particular in The Hague and in Breda, so I think you see how important those schools are – a lot of the photographers here went to those schools. It’s really a local project, and it’s good to focus on what’s happening in your country in your art scene. It’s not about ‘Dutch artists’ but it’s about everyone that’s working in, or living in, The Netherlands. So, it’s about the art schools, and the gallery system, and the exhibiting system – how the whole art world works. It’s a really good overview every few years of what’s happening in this country. 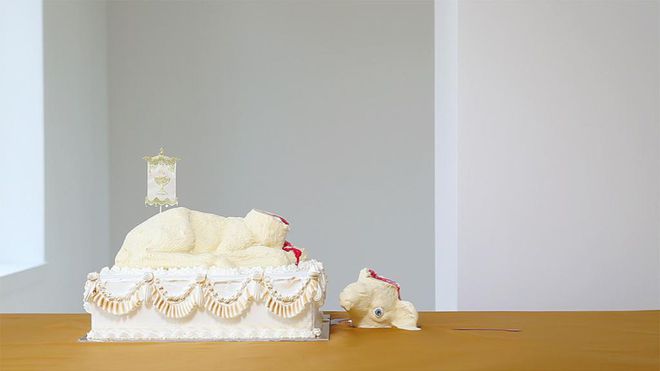 Considering so much of the new digital work can be seen from the comfort of one's couch, why is a museum exhibition needed to present this material?

You can view them at home, yeah! A lot of photobooks will be available in the shop, and a lot of the works exhibited in On the Move you can access at home, for example the Love Radio web site, and Kadir van Lohuizen’s ipad app.  You don’t have to see it in the exhibition, you can just go home and download it yourself, but what I think is interesting about this exhibition is that it’s really capturing the moment of photography and artists in this moment, and combining these works. We made a really sharp selection, so that these works really talk to each other and complement each other. That’s the best thing you can do as a museum: selecting the work.

Do you think that’s the role that brick-and-mortar museums will play going forward, as more work goes digital, or even transitions to some other medium we can’t conceive of yet?

It’s a discussion we're having now, here at the Stedelijk. Because it’s an art acquisition exhibition, that’s what we’re discussing today: are we going to acquire a web site? And how would we acquire a web site? And what would be the price? Are we going to be hosting it for the next 500 years? It’s relevant for museums to talk about what are we collecting, especially because there are a lot of photography museums in the Netherlands, but not one of them has really started to collect audio-visual installations. No one has acquired an app, or a web site, but you see photographers using these mediums. What are we going to do about it? The municipal art acquisitions exhibition is always a good moment to have those discussions.

What do you think contemporary photographers need to understand about storytelling to produce compelling work?

It’s impossible to answer that question in a general way, but it always should be about the artistic vision of the photographer him or herself. It’s really about thinking about what you’re doing. Being aware. Okay, you chose to print your work on aluminium, Dibond, or whatever, but be aware of what it means that you’re printing your work like that. Or if you’re presenting it as a web site or an app, it can’t be just because you’re trying to be ‘new’, you have to think about what works for the content, and that’s very individual. 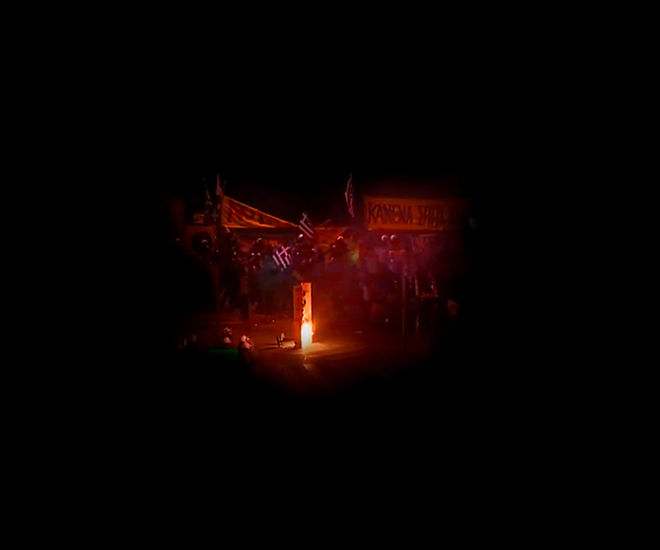 It seems that the more traditional media for presenting photo stories, like books and photo essays, are slower media than the rapid spreading of web sites and Instagram feeds, for example. Do you think there’s equal value in ‘fast’ and ‘slow’ storytelling? How do you see the role of each of these formats?

I think that what you see here is actually a countertrend. The internet and websites make things faster, and everything you see in the exhibition is a comment on that. The Sochi Project is really slow journalism – they produced a lot! Five books, different exhibitions, photo series, photo essays…  it’s a lot. But, it goes really in-depth. It’s a lot of information but it’s not fast. Or, you can see the work by Rune Peitersen, who took screenshots of live streams of the riots in Istanbul last year. It made the news seem closer, but you’re watching from a safe distance – that’s the title of the work, too: Safe Distance. So, the news is faster, but it’s still as far away as it was before.

So, he took a fast medium and slowed it down… Does that mean that the museum as an institution finds slow media more valuable?

No, I think it’s really about commenting on that. Well, in Peitersen’s case, it’s changing the live stream into a still image again, but in some of these collections of civilian journalism, it’s about commenting on the endlessly coming images. There’s so much more imagery, but still you need a photographer as an author to comment on that work, to help us understand what it is and what it means, to help us be critical of those images. Commenting on the work is a way of slowing it down.

On the Move: Storytelling in Contemporary Photography and Graphic Design is on exhibit at the Stedelijk Museum of Amsterdam until January 18, 2015.