The work of Greek-Albanian photographer Enri Canaj (b. 1980) shows grim scenes, while his photos never look harsh. Canaj's projects vary from a series on Athens that shows how the antique city was transformed into a ghetto in the wake of economic crisis, to a nostalgic series on his own homeland, to a report as he follows undocumented refugees along their travels from Greece back to Pakistan. Canaj speaks here with GUP in an interview about violence, trust and a new generation of crisis photographers.


We connect on Skype, and the camera shows Canaj's appartment in Athens. Through sliding doors, a couch and a painting become visible, obscured by occasional smoke from his cigarette. Canaj just returned from his homeland Albania, where he was shooting. He visits Albania every two months, together with his Albanian wife Iva, he explains. She has lived with him in Athens for two years now. After we talk together for only a few minutes, Canaj asks if Iva can join because he thinks that her English is better than his. “I have a lot on my mind and I want to tell you my ideas clearly." So Iva joins.

While Canaj tells his own migration story, Iva sometimes helps translate. When he was 11, and communism fell in Albania, he migrated with his family to Greece, in search of a better life. It's the basis of many of the stories he'll come to photograph later. The young sex workers who lived in the same hotel where they stayed when they first arrived in Greece, and who taught him Greek, the poverty that they lived in, the sense of being lost in a new country where they didn't know anybody: Canaj's photos still deal with these issues.

Your projects are in-depth series, but each of the images seems to contain its own little story. How can a photo capture a person's story?

Before I start shooting I talk with the people that I photograph. I learn about their lives, they tell me about their past or about their recent experiences, and afterwards I take the picture. So, first comes the story and then the picture.

There's a picture I took of a couple, and I've done other photos of couples, but I think this picture worked out really well because the girl in the picture, Eleni, trusted me so much. During the photo shoot, she was telling me her life story and I was very sensitive to what she described. She told me that she used to be very beautiful and that she went to photo shoots as a model, so we were talking as friends, and we had lots of fun. She felt very free and the atmosphere was nice and fun, but under this there was a lot of pain.

She is a sex worker now and uses drugs. You can see in the photo that, while there's something wrong, Eleni is still lovingly hugging her boyfriend Mixalis. What I like about this picture is that the power shows through the pain. I want my images to be very powerful, because it's the power I feel when I meet these people and talk to them. I really hope that my photos get across the respect that I feel for people that I photograph, because I believe that respect is the real power of a photograph. 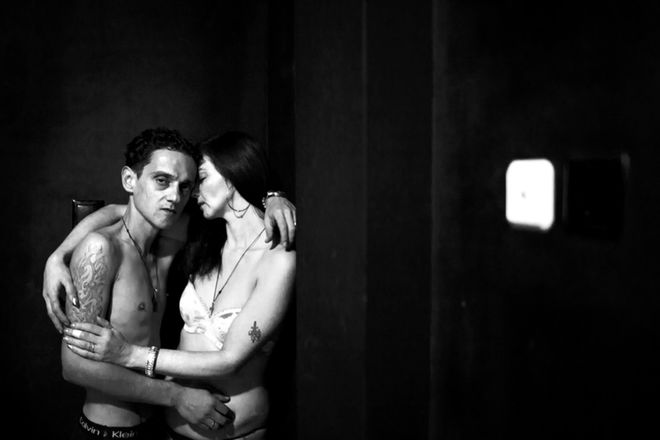 Are there photos you don't show because they lack respect?

Do you see yourself as a documentary photographer?

Yes, I am a documentary photographer, but I choose my own way to do it. When I select from the images that I took, I look at them and I try to remember what I felt when I was shooting. I think back to the impact the moment had on me. If there was a moment that I still remember afterwards, I prefer to choose that picture.

Are you afraid of romanticising harsh circumstances or criminality?

You're right, I like beauty. Even in difficult times in my life I prefer to see things in positive ways, and I want to see beauty. This is what pushes me forward in my work and in my life. I simply believe that this helps in hard times – it gives you hope. So it isn't just the situation that I show in my photographs, but it's me: I choose to put romanticism into the image, and to see it in a certain light. And I don't think that matters. For example, in the image with Eleni and Mixalis, I want to see and show the love of the couple, but in their bodies, in their skin, you can see their problems. So the viewer experiences the romanticism but also the pain. The couple's bodies show everything. Even if I want to tell a 'too romantic' story, because of their bodies, I can do nothing.

Canaj is silent, then quickly adds some sentences in Albanian. Iva translates:

There is another reason why I sometimes can't produce entirely romantic work. A few times people confessed to me that they used to be forced to steal, that they used to be thieves. And then they're telling me that information when we're already in a room together, when I'm already taking photos. That can sometimes make me feel quite uncomfortable. Because while I'm taking photos I can't only look through my camera lens, but I have to keep an eye on my equipment too.

Has it ever happened that somebody stole from you?

Somebody once broke my camera and the lens. I didn't expect it to happen at all. This person didn't want to be photographed so he broke my camera, just like that. Most of the time I try to be very careful. I seek to trust the people I photograph. Even if they steal something from me. I want to take the risk and still try to trust them. 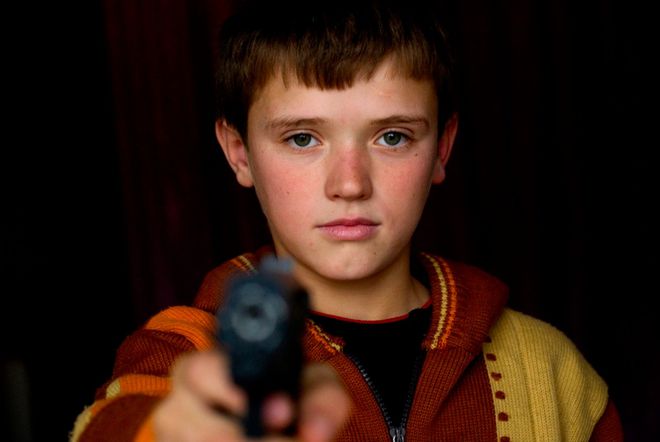 Why did you trust a person who broke your camera?

We started to talk and I learnt that it was just a bad day for him. He opened himself up and started to talk to me about his day. He had lost his job that day. After that, we became friends, but I could never ask him for the money for my camera, because he didn't have the money.

That's nice, but what did you get out of it?

Let me tell you another story to explain that. A few years ago I was up in the north of Albania on my own, and near a village, I saw five big cars with a lot of people inside. I talked to them and I went with them to their houses. We were travelling in high mountains, and there were no other cars around. I trusted them, even though I didn't know them nor the place I was in. It was a wonderful thing when I arrived in their yard, and they opened their doors and said to me: “Welcome." These are special moments for me, because I just want to get to know the people I meet. I want to experience all kinds of different situations. I would never want to have a fixer with me who becomes the one who connects with my subjects.

Yes. She has helped me so much. Especially in Albania we work together a lot. It works so much better.

People are curious about you, too, when you photograph them. So they often ask me a lot of questions, but when Iva is there, she's answering their questions. It helps that Albanian men respect women, other men's women, so they're always really nice to Iva. When I used to go on my own, I felt like I was doing interviews and I wasn't really taking enough photos. Together with Iva, I felt more free to work. She was a reason for me to start my project Albania - A Homecoming.

Canaj walks away from the computer and returns with a photo. It's a black and white photo, in a field of flowers with a low stone wall around it, two kids look at the camera with a serious expression. Canaj as a small boy is wearing short overalls and his sister a white dress.

We simply didn't have colour at the time. So, when I remember myself as a child, I remember myself in black and white. Whenever I want to stay close to myself I shoot in black and white. I also did another project in Albania, Kanoun, which is about the old traditions of Albania that are still visible today. Nowadays Albania is very colourful. People paint their houses in different colours, inside and outside, and the big buildings are full of colours. In this project I want to show Albania, and it has nothing to do with me, so I show it in colour.

My series Shadows in Greece is again a more personal project. When I first arrived in Greece, there were a lot of difficulties, and nowadays, with the crisis, these problems are here again. So I prefer to shoot in black and white, because, at least in my eyes, that shows the connection between me and Greece better. 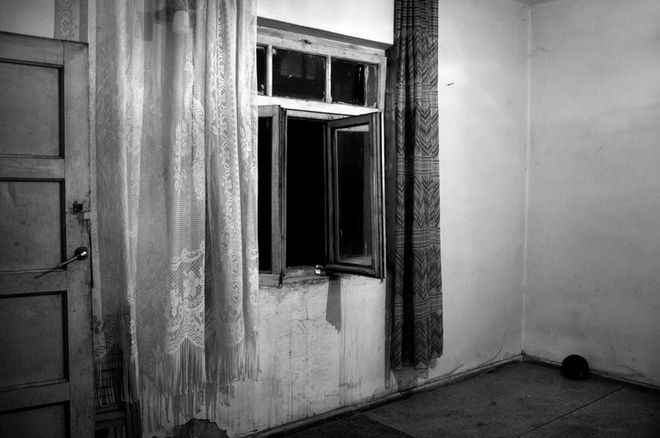 I believe that during the crisis, during difficult times in general, more people become more sensitive, and that helps art. In Greece, the lucky thing was that the crisis created a new opportunity for photographers to be in an international market. This was the biggest help for photographers in Greece, because the Greek market doesn't exist anymore.

But I think that we need to find a different way to show things. In crisis photography, the artists copy each other too much. In America, in 1930, there was a crisis too, but the situation in that time was very different from the one now, even though they were both crises. But what you see is that the photographers nowadays still look at the old crisis photographers. The situation that Greece is going through is very different though. This is a new experience for many people. So I think we should take advantage of what's happening to find new ways and to create new things. For example, I believe that the crisis now is more spiritual. People are touched in their feelings. Not only markets close, people become closed themselves.

So photographers are photographing the new crisis, but they're still doing it in the old way?

I believe we're all doing that yes. That's because it's very difficult to create something new, of course. If it would be simple, everybody would do it. But if just five people would do it, that would be a great thing for all the others.

How can we realise that new photography?

I believe that the best thing to do is to follow your instincts and your thoughts. When you do this, you'll feel more comfortable because you do something not for recognition but for yourself in the first place. You do it because the thing that you're doing creates something inside of you.