WIELS in Brussels has an exhibition of Leigh Ledare on display until December 2, 2012.

It's just not possible to know every working photographer these days, and some (even major) photographers can escape your radar for significant periods of time. Such was the case for me and the photographer Leigh Ledare (b. 1976, USA), though he's been creating controversy for some years now. So much so, that when I heard about him first, for an exhibition of his project Double Bind at MFC-Michel Didier in Paris earlier this year, I was able to find out much more about the controversy he generates than about his actual work. Double Bind is already a fascinating and confronting project, enough to get my twisted sense of humanity intrigued.

And yet, it wasn't til I was face-to-face with one of his images at Paris Photo that the full impact struck me: he's something of a demented genius.

This is the image: 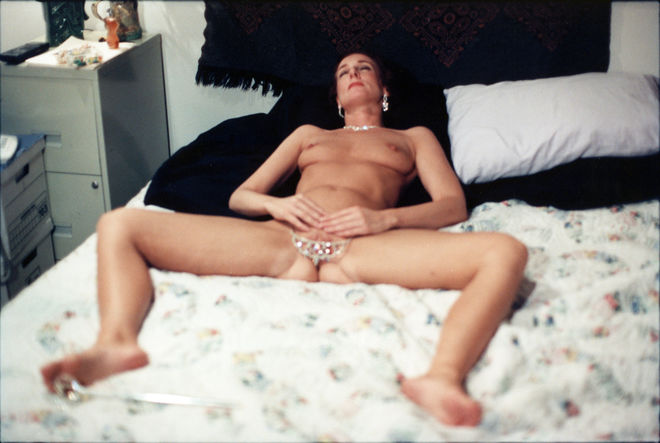 And it's not the image in and of itself that's shocking. It's tawdry, maybe a little seedy – but even the moderate among us have seen more explicit or inappropriate or downright disgusting things. It wasn't the image, but it was the slap in the face that came as I read the caption:

Instantly, there's a world of context: Taboos. Forbidden sexuality. Incest. Oedipal complex. Things that raise in us such immediate and base reactions that no social conditioning can really overwrite them.

The project, Pretend You're Actually Alive, is a series of photographs of his mother, an aging former ballerina, taken over a period of roughly 8 years. The photos are nude, suggestive, even explicit, some showing his mother engaged in sexual acts with her boyfriend… yet they don't show what we gutturally fear is there: actual sexual contact between mother and son. There's no reason to suspect such things do happen between Ledare and his mother, and that's kind of the point. The photographs confront our taboo and our discomfort, they disturb us. Ledare and his mother show their mutual comfort in shared sexuality, and a sense of playfulness, sometimes even expressions of sensuality and intimacy. Things which, though they aren't incest, unsettle us by their close relation.

Yet, the images do more than shock -- after all, the novelty of shock wears off quickly. With globally expanding ideas of cultural norms, it becomes harder and harder to identify real taboos. Slowly we're acclimatised and even numbed to the perversions of a few. Nowadays, there are few people who can successfully manage to toy with our boundaries, not just through a simple shock followed by numbing and boredom, but really get under the skin of our core concepts of humanity. In that way, Ledare does the job.

See more images from Leigh Ledare in our online portfolio of his work.