Let There Be Light

Photography enthusiasts can be even more allergic to fine art museums than the average tourist. It's funny, in a way, since it might be the case that photography was the first enfant terrible that proved to museums that the question "Is this Art?" can sell more tickets than the statement "This is Art." But if photographic purism is what you're looking for, Frankfurt's Städel Museum currently has on show ‘Lichtbilder’, an exhibition showcasing their photographic print collection, with work reaching back to ‘the beginning’ of photography, circa 1840s, up until the 1960s.

The exhibit starts with wall texts in German and English, and a wall full of framed reproductions of classic paintings, which turn out to be some of the earliest photographs that the Städel added to their collection (comical, since they mostly collect actual paintings), acquired in the late 1850s. The wall texts explain that you are about to see light in pictures (as the ‘Lichtbilder’ title suggests) and that the Städel deserves credit for collecting and showing the upcoming photographs. The dual role of museums today is to show you things that will impress you while at the same time making sure you are impressed that the museum showed them.

Lichtbilder is separated into nine sections and hung chronologically. The oldest images are mostly architectural studies, since buildings were the only things moving infrequently enough to withstand the extremely long exposure times back then. Dead animals were also good sitters, and one of the more captivating images in the first part of the show is Killed Deer by Wigand and Hutter, taken in 1858. The image is sad, grotesque, and, because of the care given to the placement of the animal and the adorning flowers, truly beautiful.

It quickly becomes difficult, however, to separate the visually interesting from the historically significant. Take a portrait of an Anglo-Saxon girl dressed in a Hanfu outfit, sitting on boxes presumably full of tea leaves straight from the Orient. Not exactly the most eye-catching, but reading the wall text will tell you that it was taken by none other than Lewis Carroll, the famed author of Alice in Wonderland, and now you've got a lot to consider. Mainly, the man's obsession with children, specifically them in exotic locations and doing things they're not yet old enough to do. It is an interesting artefact, but maybe not a great photograph. Mostly, the older photographs are captivating because of their blurry patches, ghostlike contrast, cracks, finger smudges, and because many look forged under hours of intense photon heat instead of the current standard of speedy fractional-second shutter snapping. Never mind the time required to set up the necessary equipment for making photographs in the late 1800s, you could cook an egg in the same amount of time that the exposure needed. Hence, many of the prints in the show look more ‘cooked’ by light than graced by it. 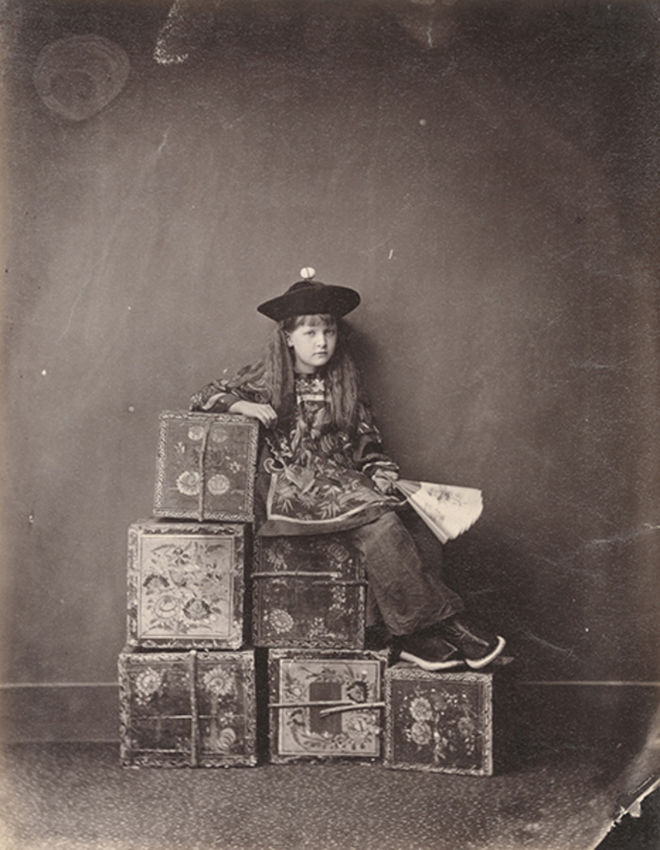 Travel and displacement seem to be recurring themes in early attempts at photography. Giorgio Sommer was one such uprooted soul, as his wall bio explains: "An impoverished citizen of Frankfurt became one of the most successful entrepreneurs of Naples." His studio in Italy churned out tourism postcards and prints: landscapes, portraits, staged scenes of Italian folklore, and other memorabilia (like his iconic photograph of the exploding Mt. Vesuvius in 1872). Yet, at least in the small selection on view at Städel, one can already see the power of outsider-views-of-other-lands-through-a-camera-lens. You could easily imagine a more refined edit of Sommer's work being published under an over-ambitious title such as The Italians a hundred years before Robert Frank's The Americans.

More galling than the question of whether photography was art, in the early years, must've been: what exactly was a camera best suited for? Scientific tool? Sociological meter? Aesthetic play-thing? Tourism money maker? Identity duplicator? You can see in the exhibition how early pioneers tested all options. Consider the range of early printing techniques. There were no black and white photographs at the time; there were uncannily realistic images fixed in multitudes of yellows, browns, magentas, cyans, and creams. The alchemy of photography once had its own (now mostly forgotten) language: albumen, calo, bromide, bromoil, vellum, photochromy, gum bichromate. It was a funhouse for the amateur chemist.

One photograph in the show that will blow your mind is from 1876 by Leon Vidal. It's a still life of an ornately decorated dagger, suspended as if floating on air, and in colour. Again, 1876, in colour. Full colour. Not just colorized or colour shifted, but full spectrum better-than-whatever-your-crappy-digital-camera-can-do rich colour. Vidal invented this printing technique, which after deciphering the accompanying text I believe resembled something like primitive dye transfer printing. Eggleston would be envious. Also noteworthy is a portrait taken by Julia Margaret Cameron (one of the only female photographers pre-1900), of a woman simply identified as Mrs. Herbert Duckworth, in 1867. Though she's identified as merely the female attachment to H. Duckworth, Cameron's portrait suggests that this woman could hold her own, with an intense gaze and mountain-like composure. There are also some Edward Muybridge motion-study prints, which are inexplicably mesmerizing in person, and fun to compare to someone like Paul Graham, essentially doing the same studies in the passage of time today, albeit in a much more conceptual way. 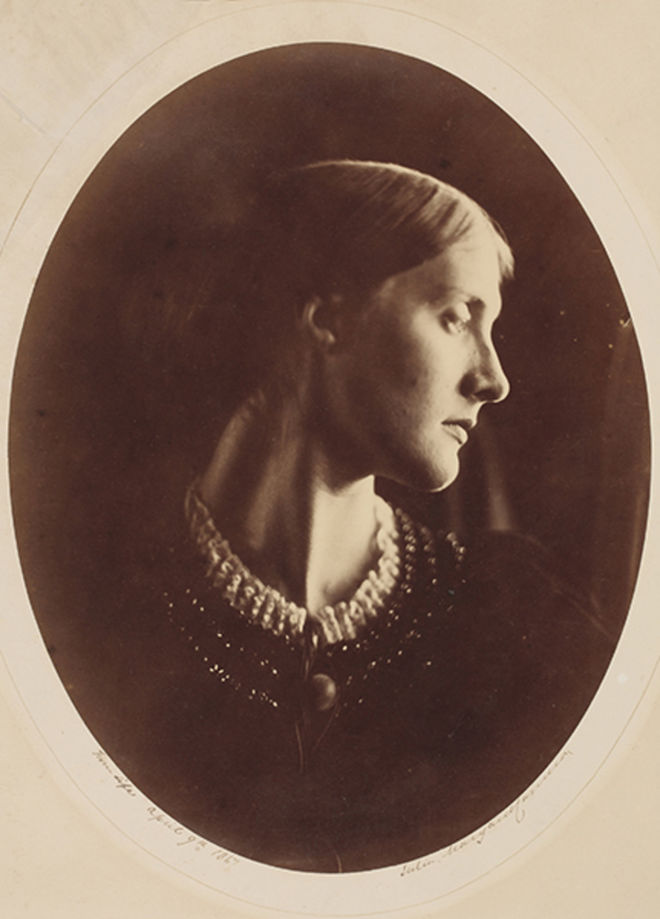 Moving into the 1900s, you find yourself in the trough-section of the U-shaped exhibit, next to a wall of August Sander photographs. Taking the photographer as sociologist (and anthropologist) thing to a whole new level, Sander rode his bike, loaded with an unimaginably heavy camera and box of plates, throughout Germany working on what would become one of the earliest photobooks, Face of Our Time. This nomadic, view-camera wielding method of working is perfectly suited for making portraits that freeze other human souls in shrines of melancholic quiet dignity, and it is also natural to then put those images into book form (a style and workflow that Evans, Lange, Frank, Sternfeld, Shore, and Soth would use for the rest of the century, respectively).

Across the room, you'll find some darkly comical portraits of Hitler gesticulating wildly, and a portrait of Mussolini looking tiny in a fascistic-ly enormous room (it was his study). By comparison, one is frighteningly un-candid (Hitler wanted to improve his gesture range and had his personal photographer Henrich Hoffmann document his moves to help him give more effective speeches) and the other by Felix Man is frightening because of just how candid Mussolini seems to be, encased by his empty mausoleum. Rounding out the fourth wall of this part of the show is a stellar grouping of smaller prints, all from the late 1920s and early ‘30s. It's a great survey of the growing number of avant-garde experimentalists of the time, with work by Katt Both, Anton Stankowski, Lotte Stam-Beese, Herbert Schürmann, and Albert Hennig. Google them, and see for yourself how their work dwarfs all those ‘experiments’ you’ve been doing with your cell phone’s photo editing software.

Photography has always largely been about documenting things you're proud of, and Germans have long prided themselves on their ability to build and finish things. Cue the work of Albert Renger-Patzsch, which fills the next room in the show. This is a man who had a fight with the publisher of his first book about the title; the publisher wanted to call it ‘The World is Beautiful’, Renger-Patzsch was set on calling it ‘Things’. The publisher won. The selection of his work in Lichtbilder (note the ever-present German flair for naming things) is humourless enough to fit under the moniker of ‘Things’. Two walls are full of detail photos of industrial machines, the framed prints in close proximity one after another, as if they were delivered off an assembly line that way. There are some great photographs though, including his 1935 portrait of an unnamed woman (perhaps people to Renger-Patzsch were also just Things?), and a series of landscapes.

At this juncture, Lichtbilder throws a strange curve ball. The next, now 8th, section of the show is titled ‘Czech Avant-Garde’ and consists of exactly that, which seems out of place in a show that claims to be an audit of photography, and has been so, up to this point. The images themselves are okay, the most interesting being those by Josef Sudek, a one-armed hermit who haunted Prague like a poetically lonely hunchback. One of photography’s best and most interesting characters. But the Czech detour makes one wonder if one of the curators had an itch to scratch, or too much space to fill. 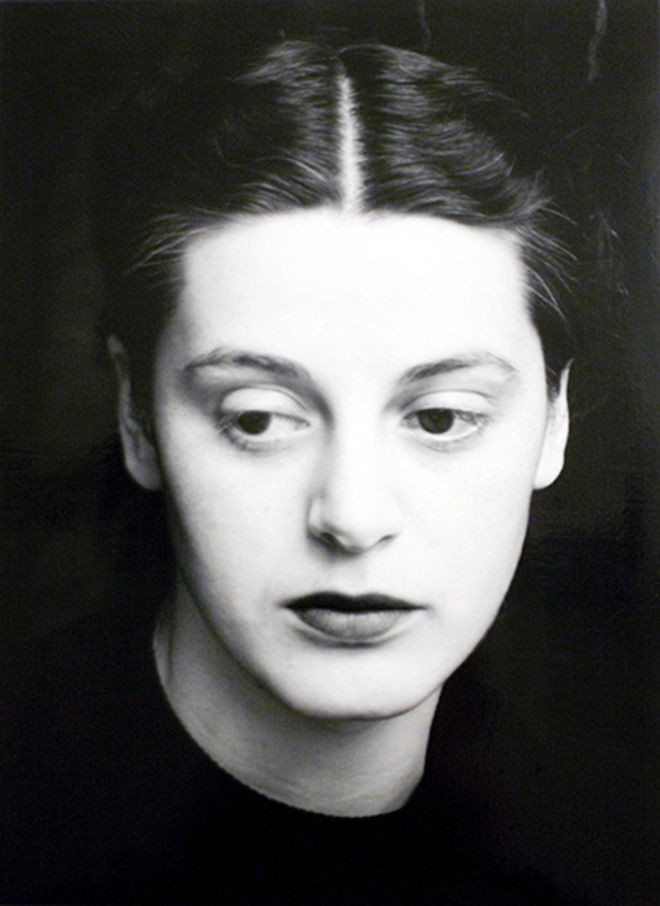 Ending the show is another mostly boring room, and sadly so. It is filled with images you'd expect to see in cheap photography magazines from the 1960s: snazzy multiple exposure shots, a perfectly lit still life of a car hood, a stadium-crowd-as-tiny-ant-like-dots shot, and some wacky exposure experiments from Otto Steinert. The one saving grace is the last image in the exhibit: It is also from Steinert, but uncharacteristic of his style, a portrait titled La Comtesse de Fleury from 1952. It's hard to walk away from. Just like Julia Margaret Cameron's 1867 portrait of Mrs. Herbert Duckworth, here we have a female face suspended in darkness, and a woman identified only as the wife of a man, Monsieur Comte de Fleury. Some gender politics are going on behind the camera here: Cameron placed her sitter in profile and in a position that exudes strength, whereas Steinert's is facing the camera, with eyes cast down, showing sadness and vulnerability.

Visitors to the show probably don’t pay much attention to the various printing techniques, to all the nerdy developments that happened over the last 150 years. They want to see people and scenes from the past. We give photography a lot of credit in terms of preserving history, but perhaps not enough in terms of how it shapes us in the present. Trying to research La Comtesse led me nowhere after the show, and her biggest place in history seems to be limited to what her portrait gives us: this was how she looked and she was married to an upperclass Frenchman. Digging into the story behind by Mrs. Duckworth’s portrait is noticeably different. Mrs. Duckworth, given name Julia Jackson, would become a widow after the death of Mr. Duckworth, not long after her portrait was taken. Later, she remarried and gave birth to the writer Virginia Woolf. Her portrait reinforces her strength, which possibly shaped her self-image, her future drive and determination. If there is any noticeable shift in the people as you travel through time in the images in Lichtbilder, it is that their eyes start to look powerless in front of the camera as we approach the present. Every society has moments of becoming self-aware, and sometimes that awareness emboldens us, but it can also cripple us with the fear of failure, of not being able to put our humanity on display with the same grace as those that came before us.