Language of forms: An interview with Viviane Sassen

Dutch photographer Viviane Sassen (b. 1972) is known for her unhindered elegant vision and her focus on Africa. She won the Prix de Rome in 2007, a prestigious Dutch prize for artists under 35, and the ICP Infinity Award for Applied and Fashion Photography in 2011. As a fashion photographer, she is both innovative and celebrated. This week, an exhibition of 17 years of her work will open at Huis Marseille in Amsterdam. GUP spoke to her about cultural prejudices, portraying sexuality and her language of forms.

For almost two decades, Viviane Sassen has been published across many different echelons of media, from established fashion magazines (Vogue Paris, Wallpaper) to underground publications (KUTT). Still, there is always something characteristic about her photographs, often depicting elegant, abstract forms of bodies and body parts. She’s become known for her preference to photograph people with black skin, rather than white. Since black people's bodies have been portrayed as mere objects, and not as persons, for centuries, Sassen's preference in a modern context is sometimes controversial.

“I know that my work is politically charged in many ways," she says in her studio in Amsterdam. She has just returned from a photo shoot in Paris on the 6am train, but doesn't consider taking a break. She is calm and concentrated. "Some people say that my work can even incite hate against the black body for example. I know that this can be a problem but, while I'm taking photographs, I try to think of it as little as possible. I try to have an open view and I'm intuitive. When I encounter things, I try to let myself be led by those things."

Naïve as this method might sound - how exactly does one ensure an open view? - in Sassen's case, her intuition doesn't lead to an objectifying portrayal of people, but to her own unique language of forms. Possibly her earliest visual memories play a role in her unique way of looking. Sassen lived in Kenya from the age of three till five. Next to her house, there was a home for children with polio. "I would compare myself to my friends. I was fascinated by their shapes, which I wasn't able to imitate with my own body,” she says. “I didn't even realize they were ill, we were simply having fun.”

When her family moved back to The Netherlands, she kept her fascination: “I always liked to pose in front of the mirror when I was a kid. I would make weird shapes with my arms and legs. I wanted to know what it looked like if I stood in such a position so that my arms became invisible. I would experiment by closing my left eye and looking with the right one, to see how my perspective had shifted. I could play that game for hours.”

Even though Sassen started her artistic career with fashion design and modelling, she soon switched to photography, "because the photographer is the one who decides what we see".

Black ink
Sassen’s work has shown a characteristic style, even from the beginning. Graceful, seemingly casual lines and shapes, almost always often of human bodies. Yet, while arms and legs form abstract lines, faces play a different, more complicated role in her work: they are often invisible. Like the unusually shaped arms and legs of her work, there is a story behind Sassen's invisible faces, too: “At a certain point, when I was still studying photography, I was taking photographs for a friend of mine who is a fashion designer. I was taking self-portraits, but I was not feeling well. I decided to use black ink to make all my skin in the photographs pitch black: my face, my hands my arms".

It turned out to have a beautifully alienating effect: "In the photos, you see a grey suit in a forest at night,” she explains. "Because it's so dark and only the suit is visible because of the flash, it seems like the suit is hovering in the air, but the person in the clothes never becomes visible. Of course, you see the position of my body, you somehow sense somebody is there.”

Hiding people's faces is a trick that continues to inspire her, though the motivation behind it may have changed. In many of her series, such as Parasomnia and Flamboya, people's faces are in shadow or behind another person's body. “Now I do it for a different reason,” she says. “I like to mystify the person that I'm photographing.”

In Sassen's work, it's not so much images with eye contact, but images of physical contact, which inspire her. “In Africa, if you're in a bus, you're often literally on somebody's lap. People are more at ease with physical contact, even with strangers.” In her photography, bodies are often attached to each other. For example, in a photo from the series Ultra Violet, two women's braids are braided together, which makes it impossible for the viewer to trace which braids belong to whom. Or, in a photograph from Parasomnia, two pair of legs are intertwined and photographed with a camera's flash, so that the shadows make the intertwining even more layered.

The entanglement of bodies in Sassen's work comes from a desire to be connected to someone, she confesses. “Away from loneliness, away from the fear of death. To really connect with somebody. Actually there is something in me that is a little bit solitary, a bit distant, so I think there's a desire that goes against this, to merge with someone, to make a connection. But to what point is that possible?” she asks rhetorically. ”Never, really.” 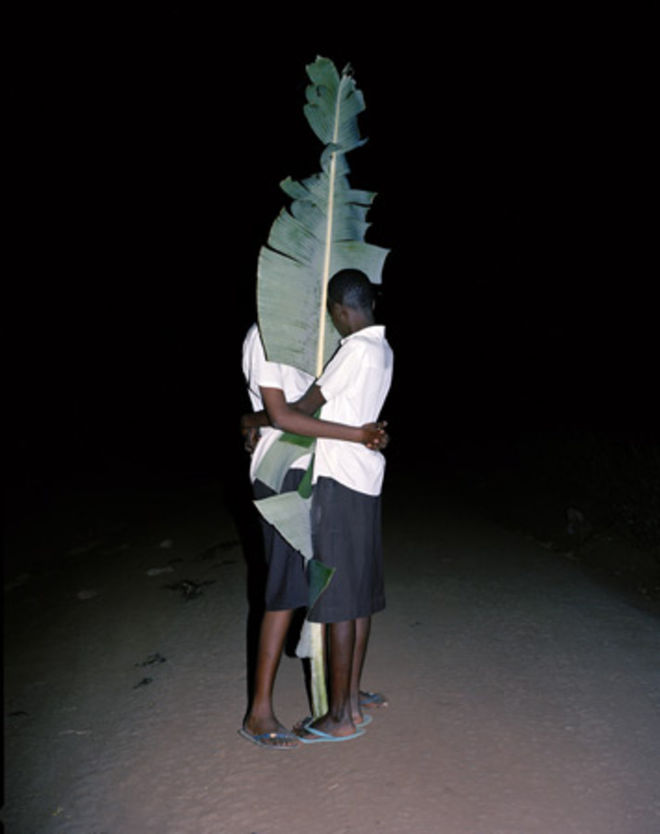 She continues, "I feel like I don't photograph sex anymore. I might still photograph nudes, but they aren't charged with that old searching anymore. I think that right now my photos are less charged, because sex to me has become less charged. But, of course, another viewer could still see eroticism in my photos. That's a difficult aspect, you cannot prevent people from looking in a possessing way, for example. The camera already is an object of power. But I think that, in my photography, I encounter fewer power imbalances than other nude photographers, since I'm often photographing my friends. I think that the women in my work therefore show a sense of strength and not submissiveness in their sexuality."

In her photographs of Africa, as well, Sassen looks for strong rather than submissive images. She likes to play with people's prejudices, she says. “I don't really want to make a statement, but I can add my image, which is different from the stereotypical image we have of Africa. Many people still think that it's mainly poor people there -- that they can't read or write. It's always the same things: illness, AIDS, famine. So what I do is slip in attributes like mobile phones, suits, cars, things that are associated with the western world, which are just as common in Africa.”

Surreal
In addition to the suits and mobiles, there are also African elements in her photography that are less material. “Not everybody realises that there are rich cultures of stories and myths in African countries. These stories often exist as oral traditions, and they form a large part of the culture.” That these stories and myths aren't always visible as objects, doesn't mean that they aren't present in a society, and Sassen tries to give them visibility. ”I think that I can show something of what is going on in people's minds,” she says, “even though many of my photos are staged. Because my photos are often slightly surreal, the viewer can suspect that, behind the image, there is a world full of stories.” 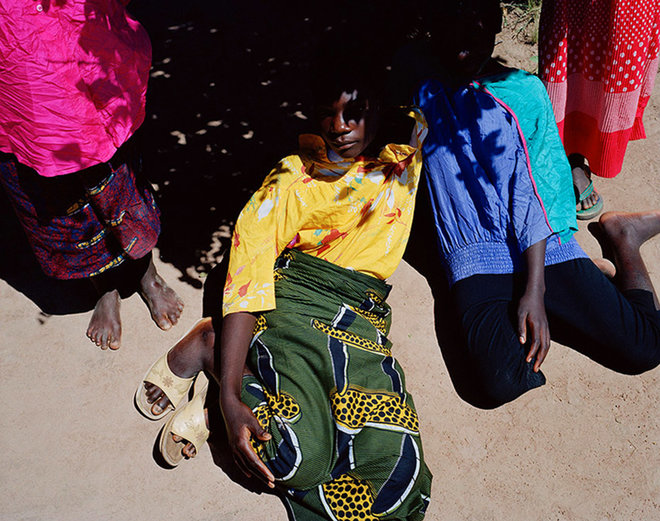 With the high level of abstraction, does it still matter that the shapes she captures are of bodies, or could Sassen just as well be a photographer of plants? “Sometimes I forget that I'm taking photographs of a person's body, that's true. I look for shapes and forms. Many people think that that's also where it ends: that my photos are just about shapes and not about individuals. I myself think there's a little bit more. I mystify the person, but I don't degrade the body to an object.”


The mystification and surrealism that are so characteristic of her work, can be found in her fashion photography as well. Fashion shoots give room to her ideas and they inspire her as an artist. “I think it's interesting that fashion can, on the one hand be very superficial, indulgent, navel-gazing and vain. But on the other hand, it can be freeing for an artist to take the space that fashion is used to and be just as decadent: there are very creative people who make some special stuff.”

Still, she's aware of blind spots within the fashion world: “I often try to get dark skinned girls in fashion campaigns. But that's difficult. A lot of brands hide behind the argument that it wouldn't work for Asian markets. Maybe it's true, I wouldn't know for sure, but then I think: you can also decide as a brand to make that step and make it work. I keep trying, but usually they won't let me.”

Immediate
The thing that she takes from the fashion world is its energy and drive. “Fashion has such a short circulation. It has to go on, it has to become better all the time. It can be exhausting too.” She smiles, and continues, “but that enormous energy also gives an enormous kick. While in my artistic work, I am sometimes working on my own, and I have to plan a lot more time to get something published, in fashion, it's a group process and it happens fast. I enjoy the group work. You get together for only one day, and then it all has to happen. There is the highest level of concentration and energy. I love that about fashion: it's fast and immediate, both as a work process and in publishing.”

With her exhibition at Huis Marseille, a few additional international exhibitions, and two new books being released this year, her energy seems boundless. What keeps her photographing? “When I take photographs,” she says, “I forget everything around me. I feel good, I'm very concentrated, I'm living inside the moment. There is no before or after anymore. I am that moment."

Viviane Sassen - In and Out of Fashion will be on display in Huis Marseille from December 15 2012 - March 17 2013. To see some of the photographs from this exhibition, take a look at our online portfolio of Sassen's project Roxane.