It's All Mixed: An Interview with Steve McCurry

American photographer Steve McCurry (b. 1950) has created some of the most recognisable images in the history of photography, including his iconic 1984 image 'Afghan Girl'. He's shot photo projects around the world for National Geographic and has been a member of the Magnum photo agency since 1986. More recently, in 2010 he had the opportunity to shoot the last roll of Kodachrome transparency film that rolled off the production belt. He was in Amsterdam to promote his new book from Phaidon, Untold: The Story Behind the Photos, and took the time to sit down with GUP's online editor Katherine Oktober Matthews to speak about working hard, keeping the right frame of mind, and managing expectations.

You've been travelling around the world to take pictures since your youth. Why do you suppose these two things, photography and restlessness, so often go hand in hand?

People that want to examine the world, that want to wander and explore, they can write, they can photograph – it just depends on what your inclination is. You could travel the world and be an architect or a ballerina! I think it has more to do with curiosity. With photography and travel… I don't know, sometimes those two things collide and all kinds of things happen.

Since you tend to take an intuitive approach to photographing -- you've said before that your working process is basically to walk around and get a feeling for the place -- is there anything you can do to help serendipity land in your favour?

Well, you need to be in the right frame of mind and be curious. I think that pretty much says everything right there.

What is the 'right frame of mind'?

To be relaxed and open. I think it's honestly that simple -- for me. I can't talk about somebody else, and their process and how they approach it. You need to sort of calm your mind and allow the present to take over and to not be preoccupied with other things.

How do you handle the times when you don't have the right frame of mind? Is it possible to force it?

Conditions in life are never ideal. You know, there's times we get up in the morning, and we think, “I don't think I'm going to go to work today. Gonna take the day off. In fact, take the week off! Gonna go to Spain and relax on the beach." You have to push through that. You have to adjust your thinking: there's no option. You have to get up and get out the door. Some days it's raining outside and it's cold. You might think, “I'll just stay inside and read a good book." You have to push through that and just do it.

Does that mean that hard work is more important than passion for getting it done?

It's a mix. It's not so simple. You need passion and fortitude. Sometimes things are not ideal and you have to power through that, but I think it's the same for anybody! That's life! Literally, that's life! I mean, sometimes you think, “Do I want to go to that dinner tonight? Or that meeting? I don't know, maybe I'll just cancel it… maybe I'll just cancel everything!" (he laughs) Know what I mean? And there's other times when you think, “My God this is incredible, I can't believe it! I'm the luckiest person alive."

So, it's mixed but, again, every human being that ever lived in the history of the planet has the same experience, it's no different. There's a whole spectrum of people who have talent and commitment and passion, but it's all on a scale – we all have different levels of those components. Some people are highly gifted and they just aren't interested in anything – nothing! I've known people like that. Brilliant, but they'd rather not do anything.

What is it that gets you personally out the door when it's cold and raining and you'd rather not?

I know that once I get out the door and on the street, maybe I'll feel differently. Maybe. Let's try it. Get out the door, walk around, have a cup of coffee, play with a dog, talk to somebody. That's the hope. As opposed to saying, “Well… I'm just gonna skip it today."

Do you let yourself skip it sometimes though?

Like I said, generally, once you get the wheels moving, you come around. Sometimes we're productive and sometimes we're not, but you really have to average it out. Some days are good, some days aren't, and you just have to understand that and relax. It's like playing roulette: eventually 22 is going to come up. I mean, even Shakespeare probably had an editing process.

Yeah, not every picture is brilliant! A writer might write something that which ends up just staying in the notebook, and for a photographer… you photograph some things that you know are just as a record, or something that you know isn't brilliant, but you get the wheels moving. Am I going to wait for the perfect picture before I start shooting? Well, how many perfect pictures are there in a lifetime? Get out and start examining the world, start probing, and eventually…

As you've travelled around and photographed other people and their experiences over the years, what has this taught you about your own life and your own experience?

Just that we're all connected, in that we're here on this planet at this particular time and we all have to interact, and get along. Try to coexist in a good way. And, do it right now, cause we're gonna be dead, and another group is going come in and to replace us. So, let's try to take care of the planet and let's try not to kill each other, so that we can do whatever it is that we want to do. What's the ultimate goal here? It's to enjoy this brief life that we have, and make it as fulfilling and worthwhile as possible. 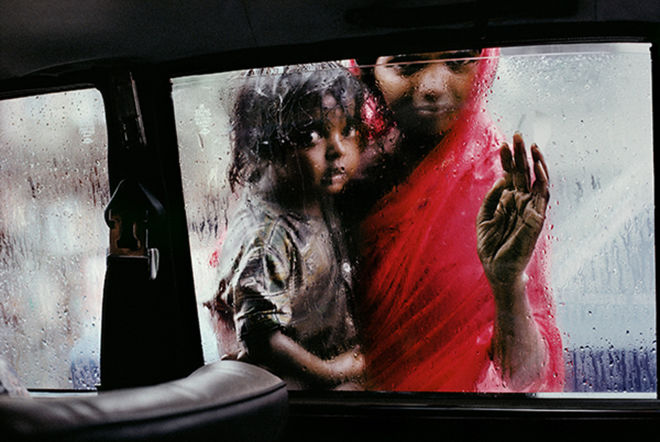 Mother and child looking in through a taxi window, Bombay, India, 1993

You describe people as fundamentally the same, no matter where you are. What are the commonalities of humankind, as you know them?

We all like to laugh. We all want to be respected, we all want to be loved, we all want to have friends and family to some degree. Most people look forward to their day off, so they can go fishing or relax or do whatever people do. People want to be appreciated. If you tip a taxi driver in Beijing, he appreciates it. If you respect a taxi driver in Cairo - talk to him, treat him as an equal and not as an object or something – he'll respond to that. When people are disrespected, they get upset, and that manifests itself in various ways. But, you take a taxi driver anywhere in the world, and they want to improve their life… that's what I'm talking about when I talk about this commonality of humanity.

In terms of photography, which can by its nature be an intrusive thing, how are you best able to avoid being seen as disrespectful?

Each moment, each situation, you have to evaluate case by case. You ask yourself from one moment to the next: is this the right thing to do, is this being respectful? You do your best to try and keep peace and keep your mind calm, and I think I do that most of the time. There's occasions where someone might get upset, but that's pretty rare. Life is swirling on around us all the time and sometimes you want to walk away from a situation. You just have to judge each moment on its own. Maybe that's too vague, but -- you want to photograph life as it's unfolding, so you can't ask everybody every time you want to take a photograph, “Can I have permission to photograph the back of your head on the subway?"… you know? They're gonna say “fuck you"! You just have to evaluate each moment. 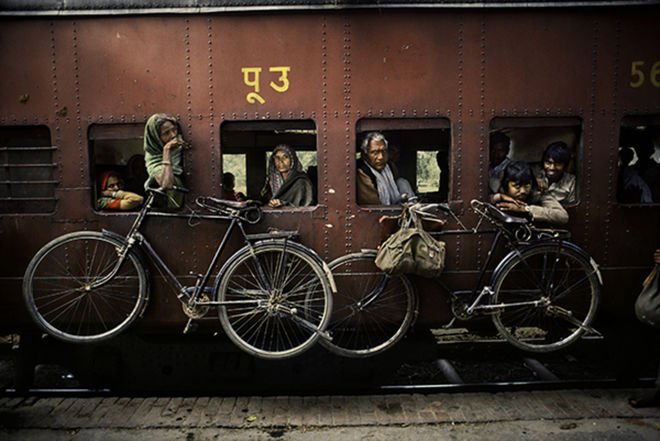 Bicycles hanging on the side of a train, West Bengal, India, 1983

By now, you've been photographing for more than thirty years. What sort of things do you still struggle with, or what is still a challenge to you?

The same things that challenged me twenty or thirty years ago! It's just that I happen to be older. It's not that anything changes, it's just that time has moved on.

There's always struggles. I mean, life is struggle. Whoever you are, wherever you are, that's just part of being alive. Those things don't change just because of some level of success. You still have to work and struggle. Effort and reward -- they're all intertwined. You can't really look at struggle as necessarily a negative thing. Or work. The word 'work' can seem kind of like drudgery, but you can't look at it like that.

But the challenges and struggles and obstacles… they all remain the same.

Which is what, for you?

Trying to do the best I can, and trying to make my life as fulfilling as I can, and all that. It's so mundane! My life, your life. We're all basically trying to get through the day the best we can. You know, like you have to do laundry… there's a level of pick-and-shovel work to life, and a monotony to it, but that's the same for everybody on the planet.

Even the people that we view as rich and famous - they go on the treadmill, they have to eat certain foods. Life isn't always at a fever pitch, and if you accept that and understand it and embrace it, then things are good. Actually, life is pretty good. Everything isn't at that peak, but that's okay. You can't have expectations all the time and complain that “my life is boring… blah blah blah" – well, that's life! That's it! Welcome to Planet Earth, you know? You have to accept it and embrace it, and then, it's cool.

Over the years, you've clearly seen some terrible poverty, conflicts and other difficult conditions and behaviors, and yet your photographs seem to be always imbued with a real humanity. When you see the worst of the worst, does it ever get hard to like people?

No, I mean, life is mixed, right? We've all had terrible times in our lives. Some days are good, some days are not good, and as you travel through life with your camera, you see the good and the bad. It's complex but there's also simplicity to it, you know? It's not all beautiful and it's not all terrible, and you could say the same thing about yourself: there's things in our personality that we like and things we don't like, so the whole thing is mixed.

But you have to try to understand that it's pretty much the same for everybody. So don't try to compare yourself too much with other people, just try to get through the day in the best possible way, knowing that, in the end, it's always going to be mixed. When you know that and accept it, you can relax a bit and not try to obsess over the fact that life isn't perfect. That's what I've learned. Because if you're expecting perfection, then you're always going to be disappointed.

Steve McCurry's new book, Untold: The Stories Behind the Photographs, is available from Phaidon.