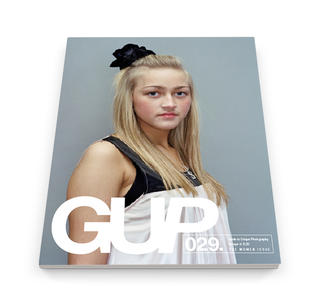 You have been working on this project for a year. How did you get to meet?

Aneta I met Yana in college and we have been close ever since.
When she came up with the idea for this project, I instantly thought of Elle.
I first met her years ago when she was modeling and later discovered her exciting photo projects.

Martynka Yana had this idea for four female photographers to join together and photograph each other. I suggested that we should be naked.

How did it evolve?

Aneta I liked the fact that all four of us had an eastern European background. It gave a sense of deeper unity. The idea of having a little 'girl-club', where we would meet up at different locations, at different hours in secret (we promised each other to keep the project secret for a long time) and create art using each other's bodies and souls, seemed almost sacred and forbidden.

Martynka Aneta and Yana were a bit shy at first, but as time went by we became more comfortable with each other and developed an almost sisterly bond / level of trust. We became creatively connected and could almost read each other’s minds on set. That’s not to say that we have not had our fair share of conflicts and cat fights – it is not easy for four females to collaborate – the estrogen overload can get out of control!

Yana To me, this collaboration was actually a form of self-portrait. I mean this in terms of the relationship of how we viewed and revealed each other’s selves through our respective lenses. Our bodies were prisms through which we examined each other and our likenesses and parallels as individual women and as a collective quartet.

When did you get into photography?

Martynka I have been interested in photography ever since I was a teenager.

Aneta I first took a class in high school, and although I spoke no English and was technically insufficient, the instinctual ability of capturing images, composition and lighting came very naturally to me. It was almost as if it was the first time I was really able to communicate.

Yana I got into photography in high school because it was the only class that motivated me to do something beyond what was being taught. It was liberating: a vast landscape to explore, one in which I could, independently from anyone else’s desires or demands, select my subject, compose the frame, and capture a moment.

Do you have a favorite camera?

Aneta Anything that is not digital... I adore old cameras and old techniques. I have been using 4x5 format quite frequently and have been shooting with Polaroid film for the past 4 years now.

Yana I love my Hasselblad. Pure and simple.

Martynka Nikon F2 – which is what I used for this project and I am holding in my self-portrait.

Anyone specific who has inspired you?

Yana My most formidable inspiration was probably Larry Clark. I saw his book Teenage Lust at an impressionable time in my life, and it certainly left an indelible mark on me. It was more than just tastes in subjects. There was a visceral quality to his images. I felt something in them beyond just the way they stared back at me. My goal with my photography has been to echo that kind of potency, to have people be engaged in a more meaningful way. Great photography is not hollow. It has depth and dimension. It feels emotionally renovating.

Martynka The list is long but some names at the top of my head: Helmut Newton, Man Ray, Marilyn Minter, Paul McCarthy, Viennese Actionists, Marina Abramovic and many other performance artists….

Aneta For a long time I never bothered to look into other artists besides what I learned in school. I remember enjoying the romantic and soft images of Julia Margaret Cameron and beautifully staged terrifying photos by Joe Peter Witkin. In recent years, I’ve been looking at the exquisite and undeniable talent and skill of Picasso, Klimt and De Kooning. I’m not saying that their work has much commonality with mine, but looking at their pieces gives me a sense of greatness in the arts, and that's my inspiration.

Would you consider yourself a feminist? Why (not)?

Martynka I once read somewhere that basically anyone with a vagina can be considered a feminist. So I guess yes you could say that I am a feminist!

Aneta It's very apparent that the world has authority in the mind of the male, and it's the male artist that has owned and dominated the gaze.
However, we have been seeing a great progression in the past half-century where the female has challenged the norm.

Yana Yes, I am a feminist, if that means that I believe in unquestioned equality across gender divides -however abstract they sometimes become. I consider myself an independent woman, and in that, I accept and relish all the cultural associations that coincide with that classification.

Is there something as a ‘female gaze’?

Martynka There is certainly a ‘female gaze’ and this is precisely what we were interested in exploring in our project. We were not acting out our fantasies for a man but collectively channeling our female sexual energy and presenting it from a female perspective.

Aneta Expressing carnal enthusiasm in providing a revealing honesty and empowering ownership of the deeper 'unacceptable' and most certainly 'unladylike' thoughts and behavior slowly gave birth to female gaze.

The pictures in 4SALE have been considered ‘controversial’. Was this the aim? Or how would you like the viewer to see it?

Martynka Anything nude is immediately considered controversial in our society. We were not deliberately trying to shock – at least I wasn’t. This project was an exercise in each of us taking turns channeling our inner exhibitionist and voyeur.

Yana I did not think that this project would be labeled “controversial.” That was not the intent. We wanted to manifest a new attitude in modern women, a raw physicality, undeniably sexual, but unequivocally comfortable with being that way. There is no subversion to that stance for the benefit of others – we own it all to ourselves.

Aneta I exist in a long line of female artists challenging entrenched patriarchic thoughts - which can still be viewed as controversial. Aware of, and sensible to, the perplexities of women in gender politics it was my aim to make the male viewer realize: this world is not created for his enjoyment. I wanted to create a raw, sexually and dangerously charged world of females and completely alienated the male presence. As my brother perfectly put: 'This seductive quality of an erotic dream tempts me to enter, but suddenly discouraged by an uncomfortable sensation I stop myself in fear of loosing something that makes me a man...a penis perhaps….'

You seem very comfortable with your body. Was there ever a time when this was different? If so, what has changed?

Martynka I have always been very comfortable with my body. I have modeled nude for many photographers and artists for over 10 years. I feel more at ease naked than clothed!

Aneta I had a very hard time for the first few months of shooting as I'm definitely more of a voyeur and feel much more comfortable behind the camera.

Yana As a child, I was a gymnast, an acrobat and a ballet dancer. I performed with the New York City Ballet at the age of eleven. Because of that physical exposure at such an early age, my body was always being studied, prodded and pushed to limitless ideals.

What does sexuality mean to you? Do you think, in our culture, that people need to be educated on the female perspective in this matter?

Yana Personally, I have been documenting sex workers since I was in college. I chronicled strippers backstage in NY and “working girls” in Nevada’s legal brothels. Female sexuality is a compelling component to my work. Women have been plagued by a societal double standard when it comes to sexuality for way too long. We are desired as sexual creatures but not allowed to be sexual in our own right and/or in our own way(s). As sexual mindsets continue to evolve, I would love to hear more women speak about their own individual outlooks on sex. Maybe they feel differently than me. Maybe they feel the same. I do not know, but I do know that it is a dialogue that happens far too infrequently.

Martynka Openly sexual women make people feel uncomfortable. Women are supposed to be ‘pure’ and keep their sexual fantasies a secret reserved for behind the bedroom door, whereas it is considered acceptable for men to exhibit their desire in a very extraverted manner. Why should we as women be ashamed of expressing our desires?

Aneta To me, sexuality is how we experience sex and how we express ourselves as sexual beings. It defines who we are! In this matter, I feel not only men are guilty of ignorance of female perspective but females themselves, hiding and playing the safe stereotype.

In what way does this project relate to your other work? What are you working on now?

Aneta In my latest project, where I’m photographing male nudes, i'm trying to further empower the female perspective, grabbing the reigns of my expression and simply 'manhandle' the gaze. I'm trying to challenge what is visually and expressively 'expectable' as beauty when sexuality is owned by an unabashed female as well as ignore male/religious taboo to champion what I see to be beauty in male condition.

Martynka As with all of my work I approached this project from a conceptual point of view. The portraits are very stark – a record of exactly what they represent. I did not paint a fantasy of any kind. I am currently working on developing a conceptual installation piece – which I am not ready to discuss in detail at this time.

Yana Currently, I am planning a project centered around portraits of female surfers as well as Hawaii’s surf gangs. Happily, we are also continuing the 4SALE collaboration. I know that we are all eager to see how the work will evolve as the four of us grow as artists, both individually and collectively.