I Want to be in America

A British friend told me recently that whenever he's in the United States, he feels as though he's walked onto a film or television set: "I've just seen so much of America on TV and in movies that it’s hard to remember that the people I'm looking at are real when I'm there." Of course, logically we know that when you see an American turn a corner in the States, they are not headed for a make-up trailer to rehearse lines for their next appearance on the subway. However, this very sentiment informs the new book from Cristina de Middel, released through the Self Publish Be Happy Book Club.

“In a way it’s like translating, or explaining, how I feel when I go to New York. When you go someplace you try to recognize what you’ve seen before, on TV or in movies. You see the cops, and you think ‘Oh this is a movie…’ but it’s real life,” de Middel told GUP in a recent interview. “I tried to document what I expected from New York rather than what New York is. And for me, New York is West Side Story.” Specifically, de Middel is referencing the film version of West Side Story, a musical which first premiered on Broadway in the ‘50s and was adapted for the big screen in 1961.

The book starts with Technicolor gradients, which were re-photographed from the overture that begins the film. Then we see an overhead view of Manhattan, also re-photographed by de Middel from the film's opening sequence. From there, we are walked step by step through the plot of the musical, by the photographs de Middel made on the streets of New York. “At the beginning, it’s very literal. I just recreated the images from the movie, so as to introduce the aesthetic of the movie. But then I start telling the story, and to tell the story the book becomes increasingly more conceptual,” she explains. 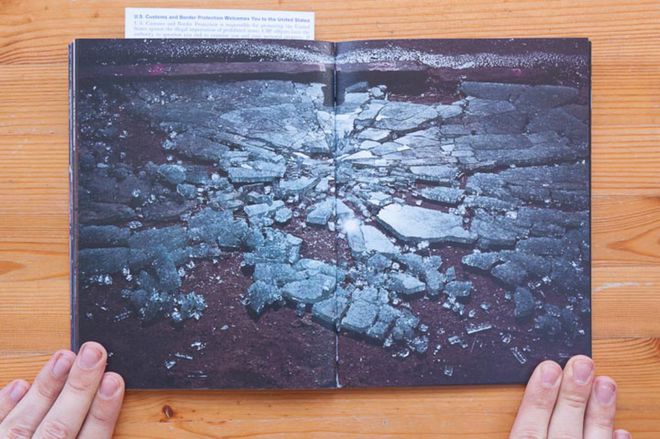 The photographs have been edited to mimic the look of West Side Story, arguably one of the most stylised films of all time in terms of colour and contrast. It's a film full of shadows, striking swaths of primary colours, and dream-like exuberance. De Middel’s images are equally surreal, and often absurd. One photograph, depicting a FedEx worker hauling a dolly across an intersection, seems to have been edited to create three facsimile images of the same man, identical triplets, crossing together. Another spread shows shattered glass gleaming in side-striking light, with a glacier blue tint that somehow makes you feel like you're falling into a Technicolor mind maze. You don't need to know that the book you're holding in your hands was inspired by West Side Story in order to appreciate it – it’s possible to simply enjoy how beautiful the images are, not to mention how well edited, sequenced, and printed the book is.

As you browse through the pages, objects fall out: A playing card from a NY Jets football team deck, a section of 8mm film inside a small plastic bag, and a US Customs declaration card (the kind you get on the plane when you land in the States). The objects work together with the book’s images to enforce the connection to West Side Story, the NY Jets card being stuck inside the spread of a photo of an all-women’s football team called The Sharks. 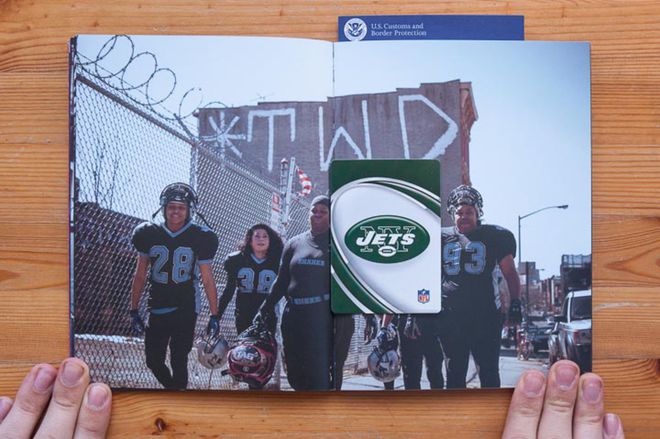 Cristina de Middel essentially broke the glass ceiling last year — in terms of self-publishing in the photobook world — with her book The Afronauts. It was so widely covered and reviewed, it’s not necessary to describe it in detail yet again here, but germane to the photographic approach of The Afronauts is de Middel’s tactic of asking strangers to participate in her storytelling. “With The Afronauts, I started this practice of working with subjects. Now I’m basically a director. In a way, reality is not enough and I have to enhance it. I have to decorate it a bit to convey the message. The story is the same, the message is the same, but I just need a more powerful reality to tell it. It’s a mix between being a cartoonist and a movie director.” For this latest project, de Middel asked people on the street to dance or pose in order to reproduce images from West Side Story. In a video made about de Middel after she won the Infinity Award from the ICP, she can be seen directing a gang of female football players (The Sharks) up and down the street, snapping away in the pursuit of her vision.

De Middel says she wanted to challenge the standard idea behind street photography, and its authenticity. Which is not to say that asking people to pose for you, or participate in your image making, is anything new to street photography. Photographers working on the street have always been performers themselves in a way, and successful ones were measured as such by their ability to rope strangers into their own weird worlds and document the resulting dynamic. 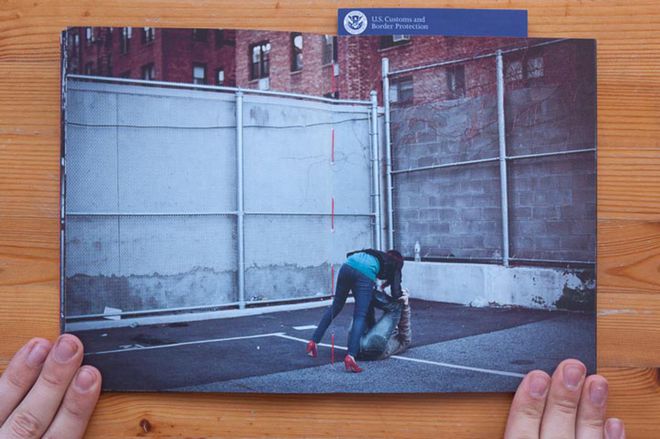 Yet, because of all this, the book occupies a strange place in the lineage of New York street photography. It's not a photographer landing in the city and 'objectively' documenting his or her surroundings, it’s a woman on a mission to mould reality to her interior view of an infamous city. A good storyteller delivers a strong sense of place, and de Middel does that superbly here, even while not exactly showing you New York as it exists, so much as the New York inside her head. But that world is consistent and fully fleshed out, and anyone flipping through this small book will find it hard to not be drawn in. The simplicity of her images also goes a long way in painting broad strokes or clear demarcations of the world de Middel is constructing.

Perhaps the price of the U.S. being the leading exporter of entertainment and culture means that media representations of American cities will inevitably be more deeply rooted in people’s minds than first-person impressions. Because of this, the transformation is complete: America has itself become a celebrity. But, it’s worth noting that it’s the same fantasy identity that brought the immigrant members of the Jets and the Sharks to New York in the first place. And the same cause of the disillusion sung about in the famous song America:

SPBH Book Club Vol III is available for sale on the Self Publish Be Happy web site.

Reviewed by Jim Reed, the founder of Easter Trouble Press.