Chinese photographer Chen Zhe was only 21 when she received world-wide attention for her photos on self-harm. It was quiet around her for the next five years, until last year when her book Bees & The Bearable (Jiazhazhi Press, 2016) came out, which won the Best Photobook Award at Fotobookfestival Kassel and was selected by Photo-eye as best photobook of 2016. In this interview with GUP, Chen explains the negative sides of positive attention, the pleasure of photographing blood and how images help her think.

In her studio, which looks out on the 798 Beijing art district, Chen Zhe (b. 1989) offers tea, butter cookies and hand cream against the dry winter air. “When I see the photos that I took back then,” she says as she pours tea, “I see trauma, and maybe even madness, but it also feels like a celebration to me. I can still feel the excitement that I used to feel.” Even though Chen laments that she became known as the photographer who hurts herself, she speaks about it openly.

She describes how it started in high school, and that taking photos of her injuries soon became part of the experience. “Photographing always came after the self-harm. I used to file these photos in a junk folder on my computer. I never thought anybody would ever want to look at them. I only kept them because they looked beautiful to me.” 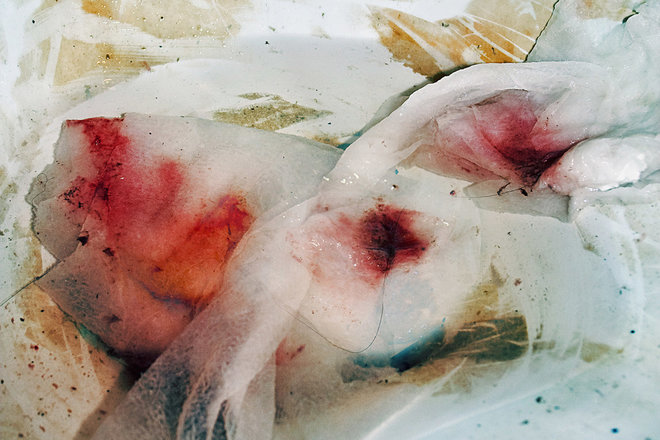 In 2007, Chen Zhe went to California for her studies, far away from her native Beijing since she felt she wanted to see more of the world. “Out of curiosity I applied to many schools, almost each a different major. I had no training in art and photography before, so it was the happiest accident that I got picked up by Art Center College of Design in Los Angeles with a scholarship.”

When I see the photos that I took back then, I see trauma, and maybe even madness, but it also feels like a celebration to me

It was here that her junk folder turned out to have more potential than she’d previously thought. “One day, for the weekly critique, we were asked to show two self-portraits, one indoors and one outdoors. I didn’t have time to finish the assignment, so right before the class I dragged two images out of my junk folder and made the prints. They were blurred self-portraits, no sign of scars or blood whatsoever. Just me in a trance. After class, the professor asked me to stay and said: ‘I think there’s something you want to talk about’. I immediately went frozen. I was afraid that he would see through me. I was so tense that by the time I walked out and stood before my locker, I couldn’t open it. The only thing I could think was: someone is going to find out.”

She describes her teacher’s remark as “a little crack” – all that was necessary for her to open up about herself. Gradually she started bringing more images into class, which the teacher would go through with her one by one. “He gave me an unimaginable amount of support. Of course he would never encourage me to hurt myself, but his mentoring did help me to realize what I was doing and why I did it at the time. I was like a pin on the paper, trying desperately to balance myself. And he saw it and said it’s okay to be imbalanced too.” 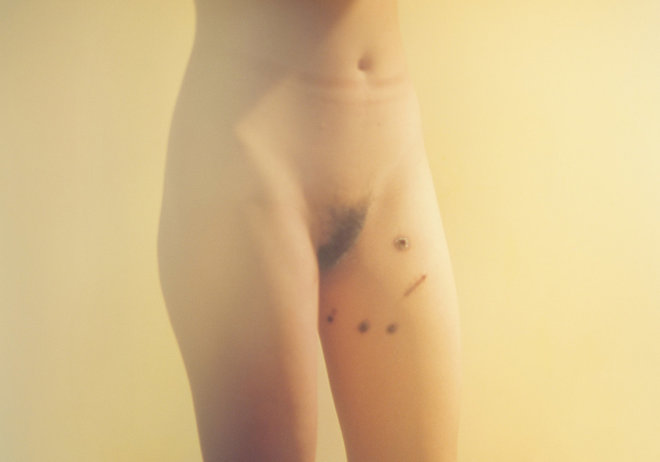 In the fall of 2010, Chen Zhe took a term off and went back to China to start a follow-up project. During a long trip spanning from the north to the south, she visited six different cities where she met up with other people who shared similar experiences with her. “I had a six-year history of self-injury by then,” she says, “and I was tired, both physically and mentally. I knew by then that it was time to make a move, to get rid of my isolation. I wondered what other people’s lives would be like. How do they feel about what they do to themselves?”

She found the people for her project, whom she calls ‘Bees’, on online forums. She explains: “Bees sting in order to protect life, which they end up losing. That is to jeopardize existence for existence itself. I find this inherent paradox of a bee's activity very alike to what I see in my subjects and myself, too. More often we feel the need to hurt ourselves in order to endure life. I’m also more comfortable using a poetic term to refer to my subjects instead of pointing to them simply as patients of some diseases. There is a flattening effect in that naming that I’ve strived to avoid. Every subject is an individual, not just ‘one of them’ – his or her life cannot be predicted or dictated by a social construction.”

The connection with the Bees was “instant and sparkling” as she describes it. “Halfway through my trip I had a memorable evening with one of the Bees. I remember we had fried dumplings and beers and exchanged our fondness of Japanese literature in my hotel room. That night I took a photo of my arm, which became a key image in The Bearable.” 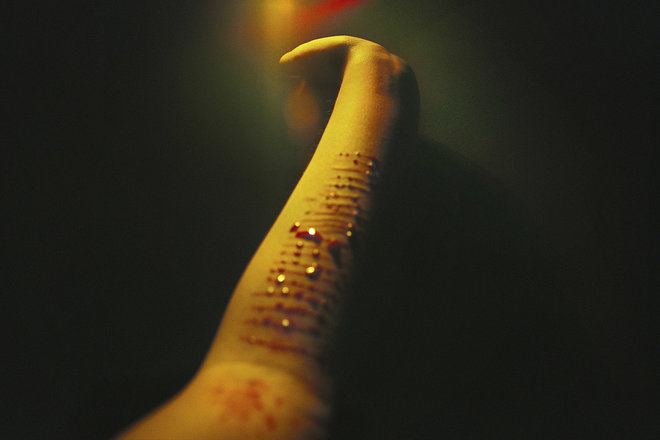 That same night she also realised it was the last time she would hurt herself. “What happened in that cramped room”, she says, “was so vibrant to me, it felt like I had made the crucial shot, a sublime moment, a perfect finale, both aesthetically and personally. I felt very content. One more attempt would make it redundant.”

What happened in that cramped room was so vibrant to me, it felt like I had made the crucial shot, a sublime moment

Chen soon received awards and praise with her work, yet it was not a perfect period of her life. She sighs as she continues: “I had a hard time with all the attention, good and bad. Some suggested that I spoke for the people who cannot speak for themselves. That was not my intention. Other media said presented self-harm as a brave thing, which simply made me angry.”

The media’s sensationalised reaction to her work was a major reason for Chen to not publish a book right away. But then, four years after she took the last image, her book Bees and The Bearable came out at the independent Jiazazhi Press. “Publisher Yanyou Di Yuan, a good friend, told me that we should do it soon because we kept receiving requests by email.” Chen says. “But I always told him that I wanted to step out of the spotlight for a while and wait until I had made an exhibition of my new work. We agreed, and so we published the book last year just one month after the new show. I’m still grateful for Yanyou’s patience.” 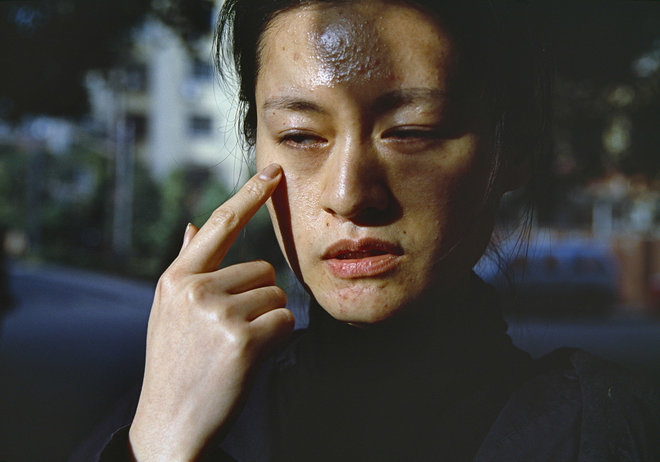 Art, Chen thinks, is able to help us ask difficult questions about ourselves. “How does a fascination come to be? What does it feel like? And how bad is it if the fascination is a dark one? In Bees and The Bearable I asked myself these questions.” Chen is glad that she had the opportunity to share these questions with others. “Why,” she asks, “would a poet publish a poem after he wrote it? He can just be satisfied with having written it and then put it in a drawer. But what often happens is that he would read it out. He wants it to resonate with people, even though he must be embarrassed to admit it, like I used to be.”

Chen Zhe's work will be part of the exhibition Any Ball which opens on April 8th 2017 at CAFA Art Museum, Beijing.
Read our book review of Bees and The Bearable here.
See more of Chen Zhe’s work on her website.
Related