Empathy is a Great Tool: An Interview with Alessandro Penso

Over the past seven years, Italian photographer Alessandro Penso (b. 1978) photographed detention centres, migrant workers, and lone teenage refugees on the run. His coverage of the lives of refugees in Europe was awarded with a World Press Award in 2014 and recently it was shortlisted for the Sony World Photography Awards. He speaks with GUP about the pitfalls of photographing refugees, the challenge of finding other people’s stories instead of your own, and why we should always ask permission to take someone’s photo.

Alessandro Penso talks fast, using his arms to stress certain words or depict the scope of what he’s talking about. As someone who frequently deals with people that don’t share a common language, he tries different registers of communication. “As a photographer you have a lot of power,” Penso says. “You can decide what a person’s story is going to look like. I think that therefore you have to talk with people a lot, especially if you’re not sure you’re understanding each other well. You have to do an effort to discover their story,” he stresses, gesturing his arms towards an imaginary person next to him. “I think this is what photojournalism is about, interacting with people you don’t understand yet.”

You’ve mentioned that the media don’t take this task seriously when they’re talking about refugees. Why do you think so?

Let me give you an example. After the Paris attacks on the Bataclan, we didn’t see any dead people in the news. Out of respect for the deceased, the media did not show their bodies. Yet we do show refugees in all kinds of states: drowning, unconscious, dead. Even in the best newspapers you can find such pictures, yet I think this is discrimination. Recently I saw a photo, I think it was in maybe The New York Times, in which six people covering their faces like this [he holds his elbow in front of his face]. They clearly didn’t want to be photographed, yet they were in the newspaper like that.

I understand that you don’t always ask everybody’s permission before you take a photo; because sometimes you’re in a crazy moment and you just click the shutter. But when you edit the photo, how can you not see what the people in your photo are trying to tell you? It worries me that we don’t pay attention to the consent of refugees, in my eyes it’s an important part of journalism. You should challenge yourself to discover who the people in your photos are, where they come from, and what their names are. Are they okay with being in a photo that ends up in a magazine or exhibition? Maybe a person has family in Damascus and doesn’t want to be recognised because he is ex-military and he can be in danger if he’s recognised. 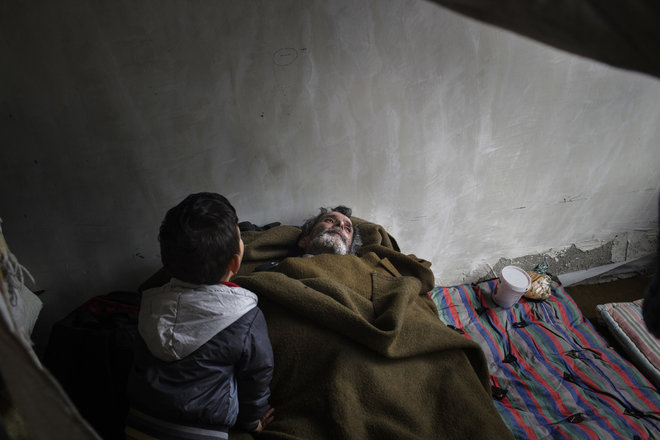 How can a photographer protect people in a vulnerable situation from such potential dangers?


It’s very simple. When you see that somebody gestures that he doesn’t want to be photographed, you don’t take the picture. One time in Slovenia, I took a photo of a police officer with a group of refugees in front of him, and there was one person who held his hand in front of his face, and another who turned away. That is a very clear sign to the photographer. When that happened, I went to them and said: “Sorry, I don’t want to disturb you. This is the picture I took of you – if it’s a problem, I’ll delete it.” Once I said that, they changed their mind and said: “Go ahead, take a picture.”

You should challenge yourself to discover who the people in your photos are, where they come from, and what their names are.

You’ve taken a photo of an unconscious man on the beach in Lesbos: he wasn’t able to speak.

That’s true. What happened was, I was taking pictures of a volunteer who was helping people that arrived at the coast. Some were in boats, and some were swimming. It was the beginning of august in 2015, and not many volunteers and photographers were in Lesbos yet. The volunteer (who was actually a refugee too) was helping a man who had swum to the shore. I took a picture while she held this man and inspected him. He looked exhausted. After ten minutes, the guy still didn’t give any signs of improvement and we understood that the situation was serious, so we started to shout that we were worried. But there was no doctor around on the beach. So I put him on my shoulders, and we went up the hills, but carrying him up the hills was heavier than I’d thought. Up there we phoned a doctor. When the doctor arrived he took the guy with him. For a moment I was relieved, but suddenly I was like: fuck, I have a picture of the guy but I never asked him anything. And then he was gone. 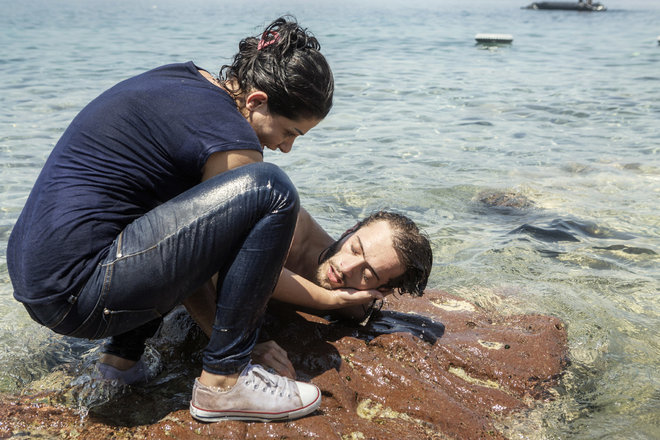 What did you do?

I started asking around to find out if people knew him. After a few days I found a woman who was his friend. I gave her my business card, and I told her: “Look, I took a picture of your friend. If there is any problem, please contact me, and I won’t use the picture.” I waited several months and she never contacted me. It was fine for me to wait so long until I published the photo of this man, because I like to take some distance from the experience before I start editing them anyway. I need time to understand what I’ve photographed. About this man I still have doubts, of course, maybe he was not okay with being photographed... But at least I tried to find out. I think you always need to try. Photographers seem to forget that refugees, after arriving on a European island, stay there for a very long time. They go to a camp and then they have to wait, so they have all the time you want. You can still ask their permission if you hadn’t been able to do so when you took the photo.

When did you start photographing refugees?

In the last week of 2009 I went to Malta to photograph a detention centre. I went there with a friend, out of curiosity. At that time many refugees arrived in Malta by mistake. They were on their way to Italy, but hit Malta first. Currently, thanks to GPS, it’s easier to navigate the sea, but back then people often accidentally arrived in Malta. It’s only a small island, and the refugees lived there like animals. Surviving was very hard. I was shocked that this was part of Europe. I wanted to find out more about refugees that come to Europe, so I started travelling to countries like Greece, Spain, Morocco, Turkey, Slovenia, Bulgaria and Macedonia.

I wanted to get the feeling across that people must have felt, that created their frustration. 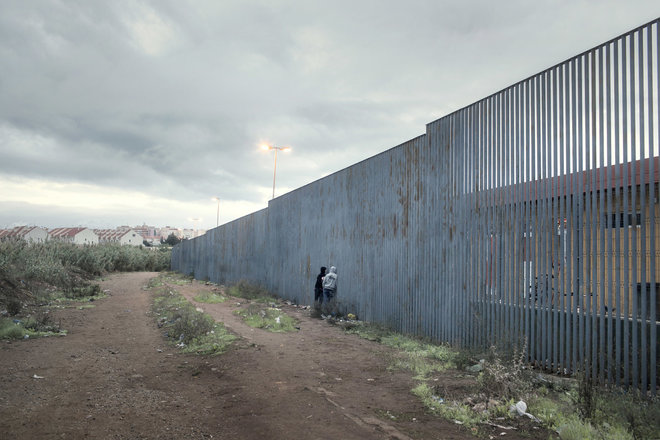 What made you keep working with this topic?

It’s paradoxical to me that in Europe, since the industrial revolution, we fought so hard to protect underage kids, but then if the kid is a refugee, there are no rights. In Greece I met all these underage people with nothing, no permit, no house. They live in old trucks, or on the streets. The governments know about this, but they don’t care. It’s weird to me that, because I have papers, I have rights in Europe; but what are the chances for these kids who don’t have any papers? All the rights, all the legislation that we have fought for in Europe, don’t mean anything for people without papers. I felt ashamed of that and I wanted to show it to others.

How do you capture that shame in a picture?

The picture shouldn’t necessarily show my shame, it should give an insight into what refugees that arrive in Europe find. Then it’s up to the viewer to feel ashamed of that or not.

For example, when the borders closed in Hungary last fall, there were riots near the border. Many photographers focused on those riots. But I wanted to get the feeling across that people must have felt, that created their frustration. So I took photos of the wall itself, the thing that led to the riots. I tried to depict that feeling of how you’re not able to cross that border. I wanted to make that experience tangible.

What I try to get across is this feeling: you arrive in Europe as a refugee and what do you have? A tiny room with other refugees or a tent, or not even that, but yet another border that you can’t cross. However, since this tragedy is often also a very personal experience for the people that go through it, I’m actually lucky when they allow me to photograph it.


Could you give an example?

When I was in a small hospital in Kos, in Greece, I met a mother with a handicapped child. It sounds stupid, but only then I realised that there are also people with handicapped children who want to escape from a war. They face even different problems from most refugees. The mother told me that it had been very expensive to cross the sea illegally by boat. Their child is completely handicapped, so they needed a bed on the boat. But the smugglers said: “You take up a lot of space so you need to pay double the price for each of the five members of the family.” And they did, because they didn’t want to leave their child behind. But now that they had crossed the sea, they got stuck anyway.

They needed to go to the police administration in person to get their papers, but they couldn’t go without means of transportation. They cannot just walk, like the others. She asked if I could help her. But I couldn’t, I didn’t have transportation for her son either and I wasn’t a lawyer. She nevertheless let me take their picture, but I would have respected it if she’d asked me to leave.

What is the most important thing that you learnt during the past seven years in which you photographed refugees?

When I’m working on a project I try to avoid making it about a certain demographic. So when I photographed the mother with the handicapped child in Kos, I of course hoped that it would say something about the experiences of mothers who are on the run. Yet it is not a story about refugee mothers, it’s a specific story about this specific mother. Similarly, if I’m doing a project about teenagers, I want to know which teenager I’m photographing. I want to know his name, where he’s from and what he’s going through – if he wants to tell me these things of course.

The thing is, it’s impossible to say everything about migration in one photo, or one photo project. But there is an individual story behind every theme. I think that it’s possible to get closer to these stories once we imagine what the person went through. Empathy is an amazing human skill, it gives us a chance to imagine what other people are feeling. It’s a great tool, it surprises me people don’t use it more often.

View more of Alessandro Penso’s work on his website.
His series Lesbos is currently on show at Museum Marítim de Barcelona as part of DOCfield Festival until September 4th, 2016.