Covering the Changing Story of Hillary 2016: An Interview with Natan Dvir

As the results of the American election came rolling in, following the polls closing on Tuesday, November 8, 2016, a new reality was being formed. While many around the world were dumbfounded by the results increasingly turning towards a Trump victory, perhaps none were more surprised, or defeated, than those who gathered for the Hillary Clinton campaign at Javits Center. New York-based photographer Natan Dvir (b. 1972, Israel) covered the event, bringing home imagery of the broken-hearted electorate that had gathered to celebrate the presumed Clinton victory. Dvir spoke with us about the night as it unfolded.

You were covering Hillary on election night, where the expectations really unravelled. Tell us about the evolution of that evening at Javits.

It started on a very high note. I got to Javits at 4 o’clock in the morning. Everything was going to start happening at 6 PM, but there were issues with credentials because they only gave credentials one day earlier, and I had to do another assignment later in the day, so I arrived at 4 AM to organize myself, to try to find the seating arrangements, to familiarize myself with the place. There was obviously a lot of security just getting in and out, but also the people who were organizing the media were a little bit annoying – they were trying to handle everything in terms of who can go where, and suddenly 30-40 photographers didn't get the credentials that they needed, so everybody was feeling that the campaign was a little bit smug, and very disorganized. But there was nothing much we could do, so we were more focused on trying to strategize how to actually get the pictures that we want.

The story changed during the night.

During the night itself, it was a little bit tense at the beginning, but the big change was when they started to release the results and you start seeing the first states. And it looked a little bit too tight… like, there were some states that should've had a strong margin, but suddenly, they cannot call it?! This is when people were not really saying “we have a problem”, but rather, “this is weird”. Then as it went along, things started becoming more tense. 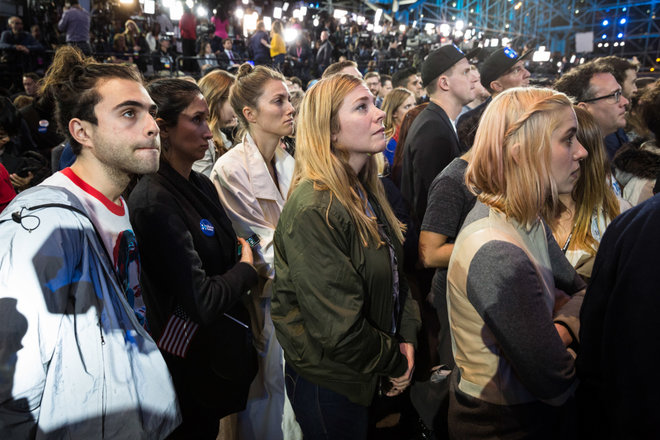 The atmosphere started changing slowly. Every state and every result that you get, you start understanding: this is not going our way. Then they even start saying that Trump has a few routes of getting to the 270 electoral votes. And eventually, the scenes became sad.

How did that affect the way you covered it?

At the beginning, you start photographing things that would be much more monumental, that would show the magnitude of the event and the settings, but then it started shifting into an awareness that this is a sad story. The expressions of the people, the despair. The story changed during the night. 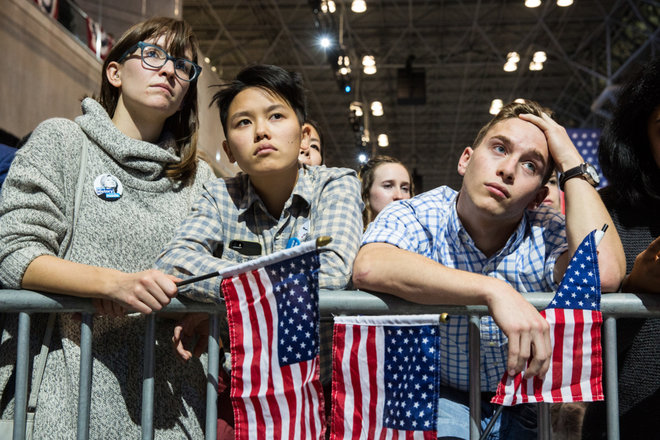 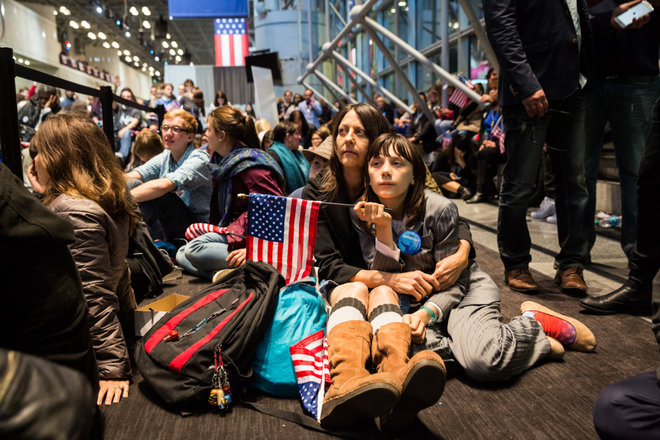 Everyone was waiting for Hillary to come, or not. Her staff told us that they had the building until 2 AM, and as that time was closing in, there was not a decisive conclusion, to know or not know, that Trump won, but it was kind of expected for Hillary to come and give a speech. Instead Podesta, her campaign chairman, came up and said they’re still waiting for everything to be counted, for everyone to be strong, and we’re going to talk in the next few days, and blah-blah-blah.

People already started leaving during the night, which was kind of weird, you know? They gathered there for hours and were waiting for the big moment, but when they started feeling that things were not going their way, people started leaving. So eventually when Podesta came out and gave the speech, there was less than a third of the people still there. People were sitting on the floor, people were crying… it was an interesting night. What can I say.

Well, this is what your story shows: the end of the night.

What was it like for you as a person to be there? Were you trying to maintain a sense of objectivity?

Yes and no. I chose to be there because I supported her and I wanted to be part of that historic moment. I used my work as an excuse, but I will do my work once I’m there. I at least tried to photograph what I’m seeing. Even if the scene changes not according to my liking, I will still photograph it. I’m not going to try to make it ‘nice’ and tell a different story.

Having said that, you are obviously also affected emotionally by the events of what has happened. At one point, I started to really understand that Trump would be the president… and that’s something heavy to understand. I had to take a little bit of a break, I took a few minutes just to deal with that. It was a sad moment for me personally, you know, regardless of my work.

So, you gather your thoughts and you continue photographing. But after Podesta gave his speech, I was like, “Okay, I’m done”. I left Javits, took a cab, went home and sent my pictures. 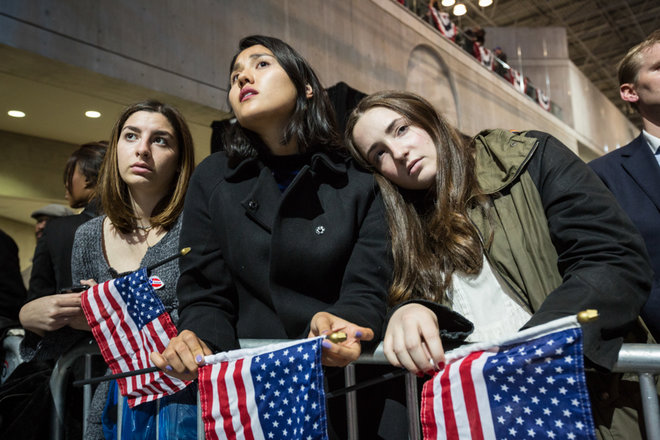 One of the things that the media keeps covering now is about ‘the bubble’, the idea that people on one side don’t have exposure to, and therefore just can’t comprehend, the other side. You were covering this story obviously in New York City, how do you think that affected things?

Nobody saw it coming, not even in the states that he won. Everybody was surprised, I think even he was surprised. Honestly, I do think he was surprised. There hasn’t been an election like this ever in the history of at least American politics, and I think it’s a case study.

I think there was a sense of euphoria, or optimism, that you don’t really believe that something can happen because it’s just so bad. There’s an overpowering belief that human beings will do the right thing, and it’s basically a dismissal of the other side and not understanding how the other side thinks. And what happened here was a total demonizing of the other side in a horrible way – I don’t think that Trump is as bad as some of the Democrats showed him, and definitely Hillary is not a horrible crook that’s going to destroy society. But the thing is, people believe what they’re being told to some extent. It’s very hard for one side to understand the other. It’s really, really hard. 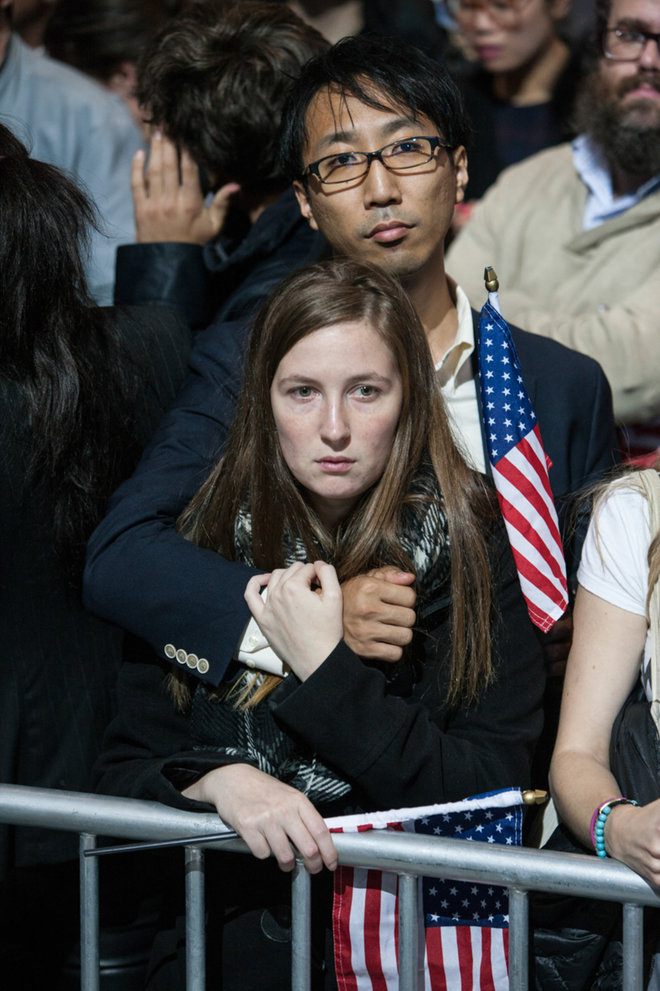 This election opened a huge gap. They took every possible option to trigger anger and pushed it. Every single one. Racism? Sure. Economy? Sure. Safety? Here you go, here’s ISIS. Corruption? Let’s do that. Exploitation? Yes. Taxes? Yes. Everything that you can be angry about – let’s exploit your emotions.

So, the operation succeeded, the patient is dead.

One narrative that has emerged from these results is that ‘America is dead’ – do you find yourself agreeing with it?

There are so many different story lines. There’s not one way of covering it… everything right now is so fragmented. We’re just consuming so many sources of information and everyone tells their story. Honestly, I don’t know. Ultimately, you have to just stick to the facts of what is actually happening. And nobody knows what's going to happen.

Now, the story is about him filling the positions in his administration. He chose the RNC chairman to be his Chief of Staff, and that frightening person Bannon, his campaign leader, is going to be his strategist. So, a conspiracy theory publicist is going to be the strategist for the U.S. Everything sounds like a parody, but it’s not. They say that tragedy is the basis of comedy… I don’t know if comedy can be the basis of tragedy.

What story that you find important to tell now?

Right now, just covering the events. Everything else is speculation. We have no idea. It’s important not to confuse stories with news. Because these days, everybody can make their own story and put it online, and people have a hard time differentiating. Social media made it very hard to differentiate something that a professional news organization has done with research in order to give you something that is valid that you should really pay attention to, from something that somebody copy-pasted from somewhere else and you’re just reading somebody’s opinions. There’s a lot of stories. They don’t make news. 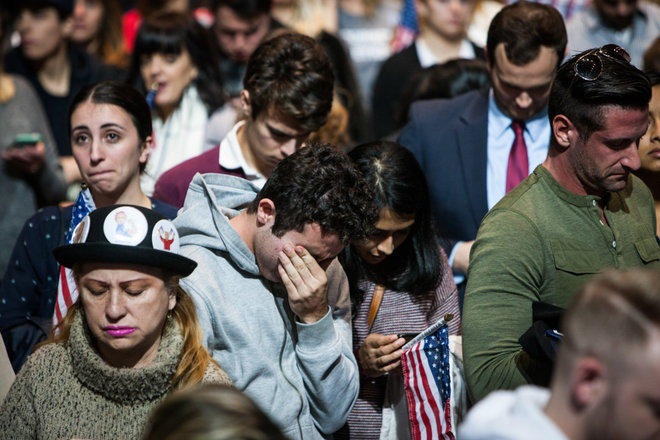 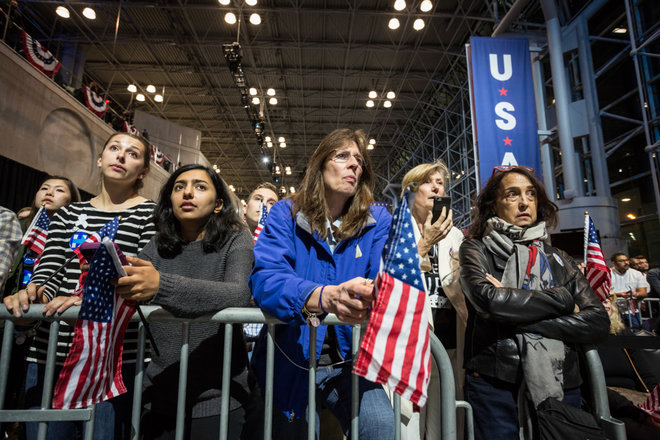 Now I’m getting a lot of requests from European magazines to do stories. Suddenly everybody remembers… before that, European magazines were not even covering the election, because everybody was expecting a different outcome. They thought: “Alright, the Americans have their own reality-fucking-bullshit-show, and after, Hillary’s going to be elected, and we’re going to do the standard story.” But now, it’s “Holy shit, what do we do?” Everybody wants to know about this. I don’t know if there is an important story right now. It’s probably not the American election. This story is done. New Zealand is a story now, with the earthquake. There is a much more important story, I think.

What now, given that the story’s done?

I don’t know, it was a tough night. Everybody here is depressed after this, it’s just so shocking. Un-fucking-believable. Everywhere you go, you talk to people, you go out…. People don’t talk about it, but they mention it…

There’s always a combination between you as a person and a photographer. One informs the other. In this case, it was also a matter of getting over what you’re going through as a person, and remembering that you have a responsibility to cover this, but also there’s opportunity here to create really valuable imagery by understanding that the story changed and going with that. It’s an interesting night to learn from and grow from. It was a night that I will go back to mentally. The trajectory of feelings was so big. You remember those kind of days. I wouldn’t call it ‘traumatic’, but… it’s memorable. I wish it had happened differently, but it was memorable. 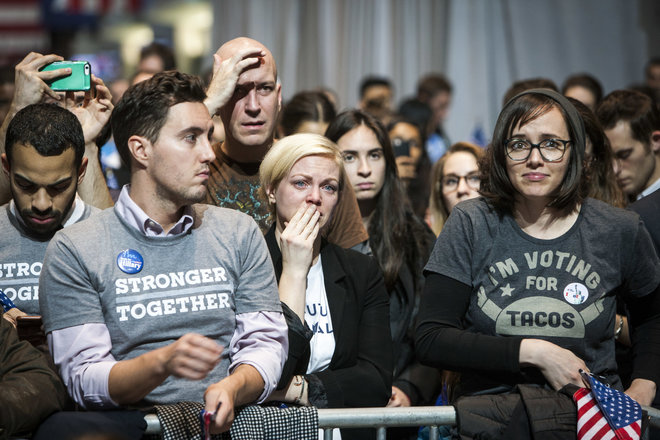