Even as a photographer, Bryan Adams is headlining. Kicking off the Düsseldorf Photo Weekend, the musician-cum-photographer opens a major exhibition at the NRW-Forum, featuring around 150 works. As though it wasn’t enough to have multiple platinum albums and a spate of music awards.

The hipsters among us may collectively groan about the idea of Bryan Adams, a pop-rock icon known for his songs dripping with sappy love the likes of which we may have trouble separating from images of Kevin Costner à la Robin Hood, now turning his attention to (and garnering attention for) the art of photography. But on the other hand, why not? By reputation alone, he’s got access to celebrities that would make most portrait photographers tingly in the knees. So, putting aside his name, the question is quite simple: do the photos hold up?

And yet, it’s impossible to answer that question simply, due to the fact that he is Bryan Adams, the same way that it’s impossible to view an image of a celebrity and try to evaluate it as though it were an image of a normal person. The rules are decisively different. We’re so hard-wired to gaze fawningly at celebrities that even monkeys would rather look at their famous cohorts than eat.  Viewing a photograph of a celebrity allows us to stare unfettered by social rules about voyeurism, or even laws against stalking. A photo of a celebrity taken by another celebrity is a triple-whammy: in each of the images, we can of course see the celebrity within the frame, but we can also ‘see’ the celebrity who took the photograph by seeing the view through his or her lens, and we can also see the interaction between the two celebrities. It’s satisfying in a base way, both disturbing and inevitable. 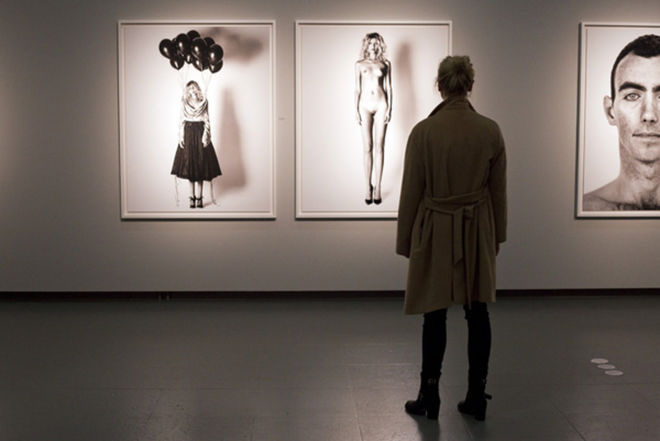 There are a plethora of celebrities in the show ‘Bryan Adams Exposed’, from a variety of fields: musicians like Amy Winehouse, Mick Jagger and Sting; actors including Ben Kingsley, Helena Bonham Carter, Mickey Rourke and Julianne Moore; he’s even got a portrait of Queen Elizabeth II for the occasion of her golden jubilee. While looking at the images, and viewing simultaneously the three aspects of the image (the celebrity him/herself, Bryan Adams, and the interaction between the two), it’s interesting to note the differences in the way he interacts with them. Some portraits, including that of the Queen, are striking for their informality, while others are basically exactly what you would expect: sexy women made to look sexy, rock stars fronting with attitude, writers overwrought with thoughts, actors laden with emotion. The photographs therefore do conform to our expectations of what celebrity photos look like and, perhaps exactly like the music of Adams, are excellent quality from a popular context.

Photography, as has been pointed out by the British critic Gilbert Adair and reiterated by Geoff Dyer in his book The Ongoing Moment, poses an unusual "question of the pecking order of by and about". With books, for example, "The Ground Beneath Her Feet is a novel by Salman Rushdie about Orpheus and Eurydice; […] on the other hand, a snapshot of Diana is primarily about her and only secondarily by Lord Lichfield". When we view a photograph, it’s only rarely, when the photographer is noteworthy for his or her own work, that we might we know the artist behind the production of the photograph, rather than identifying it by its subject. So, in the context of celebrity-on-celebrity action, as in Bryan Adams Exposed, there is immediately a case for reframing which celebrity we’re actually more interested in. 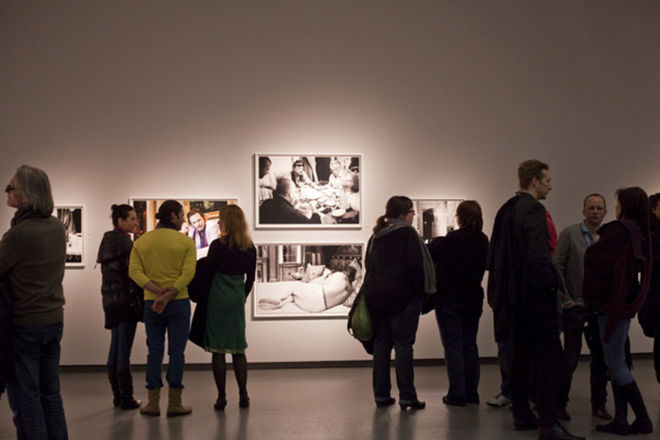 Holding an exhibition of Adams’ photography is, in a way, a safe bet: people will come, regardless of whether they’re more interested in the photographs of Bryan Adams or the celebrities pictured, and regardless of whether they think the photos will be great or just out of a schadenfreude sense of enjoying the shit photographs of a famous musician. On the other hand, an Adams exhibition is also somewhat uncertain, at least for Adams himself, if not the museum. It’s not that he could ruin himself – he is, after all, established enough to take risks. But, through this exhibition, he is defining how people will come to view him as a photographer. Should the display be dismal, he doesn’t have the benefit of being an emerging artist with an audience forgiving of amateur mistakes. As a celebrity, he will receive the full brunt of judgment from the heckling crowds of the arena, hoi polloi and media alike. It’s the double-edged sword of being a cross-over artist.

The organisers are well aware of the pull-in potential of Adams, and thus churn out even the name of the exhibition through their marketing machine: Bryan Adams Exposed. While they’re trying to present something clever with the double-meaning of the word ‘exposed’ – suggesting that Adams is not only exposing his photography in an exhibit, but he is also exposing himself – the exhibition does not come across as something which reveals Adams’ vulnerability, nor his private life. The images on display are almost entirely comprised of studio shots, posed, lighted, perfected. There’s even an articulated precision to the somewhat spontaneous shots. What makes the exhibition strong (i.e. so many well-done photographs of celebrities) is also arguably what makes it weak: over-architected quality fundamentally excludes real intimacy.

The exhibit does include another room of photos of soldiers who have returned from tours of duty, injured and scarred. These portraits are a stark contrast to the celebrity images, due to the nature of the way we view them. They’re unsettling and beautiful – if such a word can or should be used to describe the living casualties of war. It would’ve done more justice to these images to exhibit them entirely separately from the rest, however, giving them their own space to breathe. In the current context, the emotional shift from one room to the other is a little too jarring. Yet, what’s strange about these photos of unknown soldiers is that they still cannot escape being celebrity portraits, because of the person who took them. They’re photos by Bryan Adams about soldiers.

When it comes to evaluating the work overall, you may find yourself trying to distance yourself from what you know about Bryan Adams, or the celebrity pictured, to judge the photo by artistic merit alone. There’s no harm in trying, and it’s only natural to give it a shot… but it’s ultimately a fool’s errand. He is who he is.

Bryan Adams Exposed is on display at the NRW-Forum in Düsseldorf until 22 May 2013. 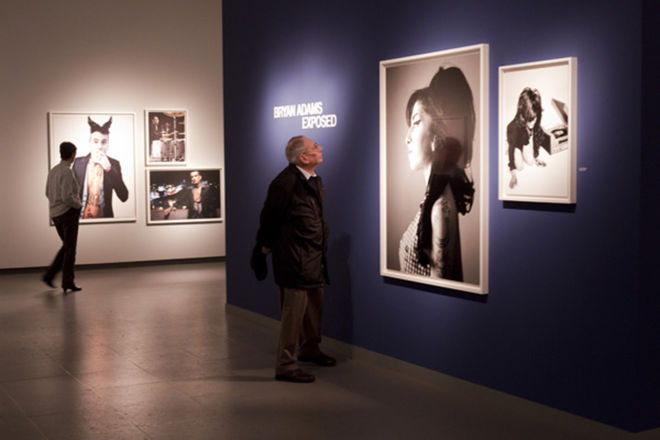