​Boys Can Be Beautiful: An Interview with Lissa Rivera

New York-based photographer Lissa Rivera is fascinated with the social history of photography and its relationship to the evolution of identity. Her latest project, Beautiful Boy, takes her interest in photography’s connection with identity to a personal level, focusing on her partner, BJ, as a muse. The idea for the series arrived from a confession BJ made to her: that he often wore women’s clothing, but struggled to navigate a world that seemed both newly accepting and yet inherently reviling of male displays of femininity. By photographing him, Rivera wanted to provide a space for BJ to experiment with his identity, and together, they developed the series Beautiful Boy, which recently won the Feature Shoot Emerging Photography Award. GUP talked with Rivera about making the series, her view on gender roles and photography’s power to construct beauty ideals.

Your series is called Beautiful Boy. What does this title mean to you?

I called my work Beautiful Boy, because words like ‘beautiful’ and ‘pretty’ are often not used to describe men. Most of the time they’re connected with women and femininity. However, I think anyone can be beautiful. The title of my series was also inspired by a book by Germaine Greer, which is called The Beautiful Boy. This book is about giving women permission to enjoy male beauty. Greer looks at historical representations of men and reveals their beauty from a woman’s perspective. Although I do not agree with all of her theories, the concept of the book really inspired me, because I experienced the same feelings when I enjoyed the beauty of my partner while making this series. Furthermore, I chose this title because I wanted to reflect freedom from age and gender. In my opinion, older people can still be youthful and beautiful. I don’t want to stick to what society ascribes as ‘proper gender behaviour.’ 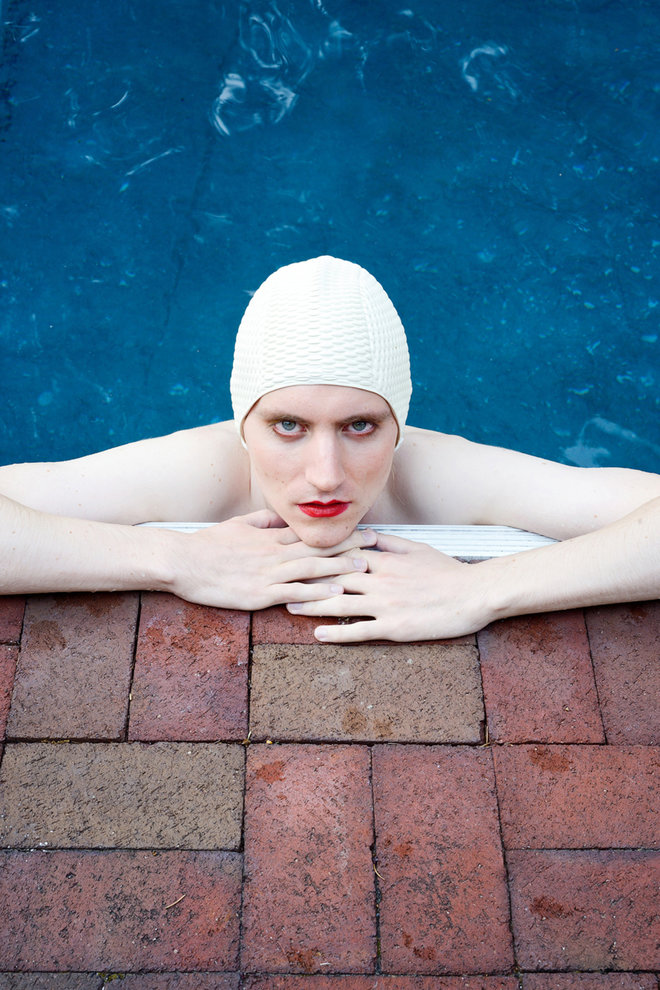 At a very young age, I was aware of the fact that my perception of beauty standards and gender roles differed from others.

When did you become interested in reflecting your view on gender behaviour in your photographic work?

It’s something I’ve been thinking about for a long time. At a very young age, I was aware of the fact that my perception of beauty standards and gender roles differed from others. I remember being at a book fair when I was five years old. All the girls from my class were buying pink-colored books about kittens. I really didn’t like the pictures, but I felt I was forced to buy them, because that’s what girls should do. However, I had the feeling that I was lying to myself. When I became a little older, maybe around ten, I also didn’t like the teen magazines with images of guys I was supposed to have a crush on. I remember looking at them suspiciously and thinking ‘this is terrible’. I found androgynous people far more interesting. When I was younger, one of my favorite movies was Female Trouble. The main character of the movie, a rebellious teenage girl, was played by a male actor, Divine. I found it amazing that John Waters, the director, made this uncommon decision, freed from any standards. It’s really interesting how the gender topic has returned in my life in different ways. When BJ and I started to talk about it, we found out that we shared the same vision, and by making the series, we wanted to try to push the boundaries of gender and cultural taboos.

How did the collaboration go? How did you arrive at this aesthetic?

We wanted to construct our fantasy based on the things that inspire us. For example, BJ has recently been obsessed with 1960s girl bands, so I bought a lot of 1960s clothes and we went to a hotel with a mid-century aesthetic to shoot a part of the series. In making the series, we are not looking for reality. We are using photography to make our fantasies real, and draw inspiration from a lot of different sources, including music and film. This summer we’ll be renting a house which we’ll use as inspiration to continue the series. Besides music and film we are also inspired by early colour photographers such as Nickolas Muray and Paul Outerbridge, among others. By collecting and melding all these sources of inspiration together, we have developed an aesthetic which reflects desire and sensuality through color, texture and lighting. The series doesn’t show who BJ truly is, because I feel identity can change over time. Normally, BJ wears blouses, cotton dresses or other more comfortable clothing outside the photos. 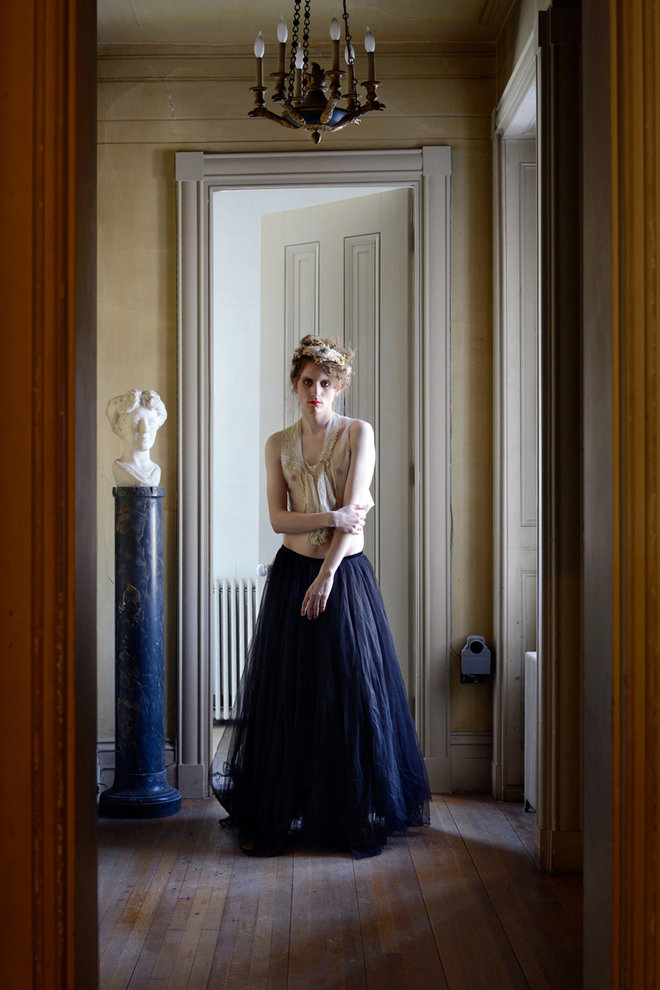 He went to a very liberal college in the United States. The people there were open-minded and he could wear whatever he wanted without getting too many negative comments. BJ was able to wear dresses and he mixed men’s and women’s clothing. However, after graduating, he faced difficulties with wearing women's clothes. He moved back to his parents for a few months and didn’t want to shock or confuse them. Also, being very shy, he stopped wearing women’s clothing in public, except for special occasions.

Yes, definitely. We got a lot of positive reactions and it feels like we can talk more openly about the topic, also with his family. When he goes to work now, he often combines menswear with women’s clothing. BJ is very androgynous, he often looks better in my clothing than I do!

Exploring the history of the representation of femininity through the archive inspired me to add my own vision on beauty to history.

In all your earlier bodies of work, there are no people visible. What changed when you started to portray a person?

For a long time, I did not show people in my photos, because it felt like a huge responsibility to represent someone else. There was a period when I became interested in using material objects to represent human presence. However, when I was working in a historical photo archive focused on 19th century photography and early portraiture, I became really interested in the way portraiture has shifted over time. This reveals that conceptions of feminine beauty are not stable. Exploring the history of the representation of femininity through the archive inspired me to add my own vision on beauty to history. 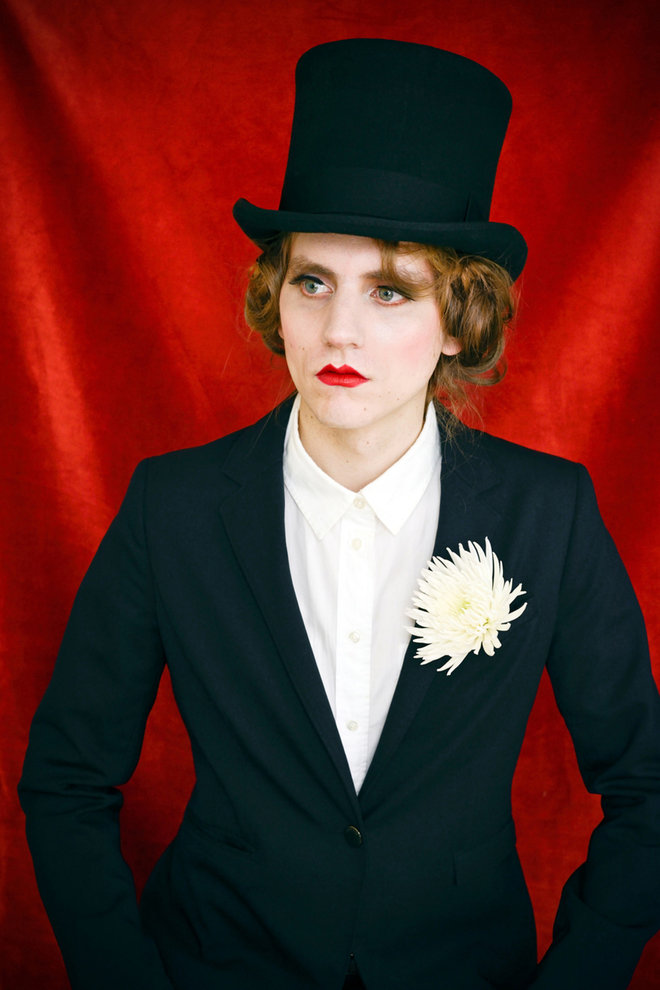 People who are outside the norm of beauty are not photographed as well nor as often as those who fit into accepted standards.

Were either of you afraid to share the images?

While we were developing this project, we were actually quite worried about the reactions of people who’ve never seen BJ wearing women’s clothing. It’s an unusual feeling to share this very personal work, to say the least. However, I think the work has to be shared with others and can even become stronger when it’s shared. I hope that it can help people to express themselves and to talk more openly about their desires or things they feel ashamed of. People who are outside the norm of beauty are not photographed as well nor as often as those who fit into accepted standards, and we wanted to change this.

Standards of beauty are created through the repetition of images.

Why do you think photography is the right medium to make this change?

Visual language is an extremely powerful tool because people react to things they’re familiar with. I have been interested in the idea that popular notions of beauty are largely drawn from looking at repeated images. The quantity of the imagery has an incredible power to create desire. For example, a few years ago, it was not as popular to aspire to the same body type as Kim Kardashian, but now people do, because she kept repeating her image over and over again. People want to look like her, because they see her body everywhere and it has now become a standard. Standards of beauty are created through the repetition of images. 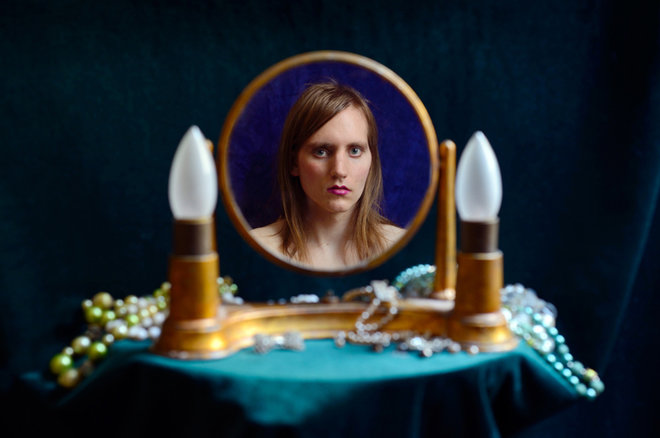 Men should have the opportunity to wear a dress, the same way as women are allowed to wear pants.

So, you think that if people would see images of men wearing women’s clothing more often, they would get used to it and our current perception of beauty, in relation to gender, could change?

It’s hard to say. But what is represented often in the media definitely changes a culture’s perception of beauty. However, it’s a difficult topic and what I’m doing is not something new. I’m far from the first artist to experiment with gender fluidity. This was already a big topic in pre-war Europe, although many of the people who talked about it didn’t survive, especially in Germany, which had been a center of gender experimentation. Over the past twenty years, people have started to talk more openly about the topic, but there are still a lot of taboos we have to deal with today. Hopefully, people are ready for a real change now.

I find it strange that women’s clothing still has so much weight to it. In the 1920s, women cut their hair short and it became more common to wear pants. First, it was incredibly shocking, but after several decades, nobody noticed it when a women dressed in clothing originally associated with men. When a girl plays baseball and wears a baseball hat and pants, people even say “she is a tough, strong girl.” But when a man wears a dress, people might say “he’s so weak, he’s a sissy.” However, in my opinion, it’s strong actually, because men who wear women’s clothing dare to take a risk. Men should have the opportunity to wear a dress, the same way as women are allowed to wear pants. When looking at my images, I think there’s no doubt about the fact that BJ looks beautiful in the dresses. In my eyes, this is how the image has to be.

Until June 25, Beautiful Boy will be shown at United Photo Industries, as a part of the Feature Shoot Emerging Photography Awards Exhibition.