A Funny Dance: An Interview With Sara Lewkowicz

Sara Lewkowicz (b. 1982) is an American documentary photographer known for her intimate portrayals of people’s lives. When, in 2013, she published a series on domestic violence, that work earned her both a World Press award and a lot of criticism. She was accused of not defending her subjects and exploiting their stories. In this interview Lewkowicz speaks with GUP about the false dichotomy between care and objectivity, building a relationship with the people you’re photographing, and sticking with a story.

For many of your series you get very close to people, you almost become part of their lives. One of the reasons you’ve given for being able to do so, is that you’re prepared to be vulnerable in front of them. How does that work?

It happens when I’m hanging out with someone and, in between taking pictures, we talk. So at some point I reveal something about my own life. With Maggie, one of the people I photograph, I hung out a lot, so she knows some things about me that very few people know. That process of sharing things is crucial to how I shoot. 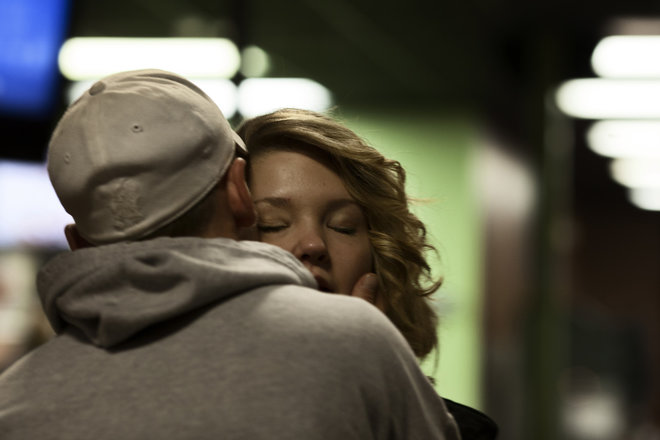 To what extent do you think your presence influences the scene you’re in?

People are conscious of you always. Maybe unless you’re in war, when you’re in a situation that’s so overwhelming that the presence of the photographer is totally dwarfed. But even then, if we look at refugees from Syria getting off boats on the European coasts, you’d think that the last thing they’re concerned with is this photographer, yet they’re often clearly aware that there’s a bunch of cameras stuck in their face. The way that they’re treated by the journalists who document them is inevitably playing a part in their experience of migrating.

But if we look at an intimate scenario in particular, there’s no way that your presence does not influence the scenario. That isn’t a bad thing, yet you have to be honest with yourself. I mean, if you think from the perspective of the person who is being photographed: how normal is it to have a person with a camera around? [Laughs]

How did that go when you were photographing Maggie and Shane, the series that got you your first World Press award?

It was 2012, and I was doing an assignment for my editorial photography class, since I was studying for my Master’s in Photography at Ohio University at the time. I met Shane and Maggie at a local Ohio fair. Shane looked impressive with a large tattoo of the name Maggie on his neck, so I approached him. He was an ex-convict reintegrating in society, he told me, and I asked if I could photograph him for my school assignment. For the next two and a half months, I followed Shane and Maggie and her two small kids. I hung out with them at home and during outings. In retrospect I should have seen the signs of violence, but I hadn’t. One night, Shane started threatening Maggie, and then he choked her. I had asked somebody else in the house to call the police, and then I photographed the abuse. 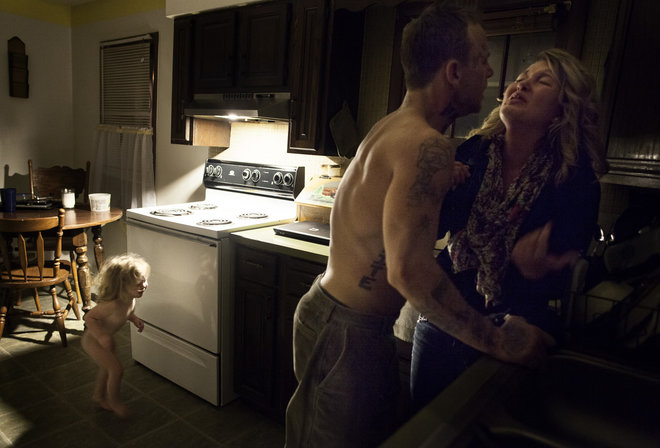 How do you know when you can and can’t photograph?

It’s a funny dance. Sometimes I know I’m pushing someone a little past their boundary and I do it anyway. But in order to be able to do this, you have to have already established a lot of trust. It’s a negotiation that’s built on trust. You have to have made it really clear that you’re doing this because it’s an important part of the story, but you want the person to know that you’re not gonna let them down. There’s a couple of moments when I’d ask before I take the picture. If they allow me to, I do take pictures, even if I feel a bit uncomfortable at first.


You always have a split second of: maybe I pushed it too far this time.

After the domestic violence episode with Shane he was sentenced to prison, but I continued to document Maggie. She went to Alaska to be with her estranged husband Zane, who she was with before Shane and is the father of her children, and I happened to be there when they got into a heated argument. I had followed Maggie into the bathroom and I asked her if I could take a picture, and she said yes. That was weird: I was negotiating with myself because I didn’t know if I should be doing it, but she had said yes, and I knew that she said that because she trusted me. From our previous experiences she already knew I wasn’t just there to take a picture. I had been there to take her to battered women’s shelter after Shane had attacked her, I took her to her sister’s house: I’d been there for a lot. But if someone doesn’t want you to be there you also have to respect that. There was one time when a person whom I’d followed for three years at that point, Alex, didn’t want me to photograph her. I had to accept that, it’s her prerogative. I think that a photographer should always remember that the person hasn’t allowed you to be there for everything. If they put their foot down, you have to listen.

When that happens, are you afraid that you won’t get another chance to photograph them anymore?

You always have a split second of: maybe I pushed it too far this time. Or: maybe she’s gonna shut me out. It’s a gamble for sure, but I would venture to say that they are as invested in me, in many ways, as I am in them. They know that I care about them, not only as a photographer but also about them as people.

In order to get really close to people... you have to care.

Is care about the people you photograph more important for you than to be objective about what you see?

I think it’s a bit false of someone to claim objectivity. It’s a little silly, because in order to get really close to people... you have to care. I would say: acknowledge that you have feelings and then push yourself to be honest and then think really critically about your feelings. So if you look at Lynsey Addario, who is one of my big inspirations: she documents what she sees, but she also cares. What else is the point of doing it if you don’t care?

Is being honest always documenting what you see, or is it also sometimes putting down your camera to help someone?

About Shane’s abusive behaviour towards Maggie you’ve said that the camera had picked up on the signs much earlier than you had. His physical proximity to Maggie wasn’t as suspicious when you were hanging out with them, but on camera it looked clearly like he was crossing her boundaries. Do you think this happens more often, that the camera picks up on things before we do, since we’re in the middle of it?

Recently that happened when I took a photograph of Kate and Emily, who are married to each other and were pregnant at the same time. In the photo they are brushing their teeth and their bellies are very pregnant and prominent. In this shot we also see a counter with toiletries, and amidst that, there’s a box of prunes. Many people that I know who had been pregnant cracked up when they saw that shot, because apparently pregnant women eat prunes to get their digestion moving. It’s a thing I didn’t know about because I’d never been pregnant. You don’t fully know what you’re putting in your frame. You just try to make it clean, but sometimes it has some surprises, and you don’t even know you brought them in your frame. That’s what I think is so magical about that creative process. You suddenly realise again, there’s a bigger thing: it isn’t necessarily about you and your conscious thoughts. 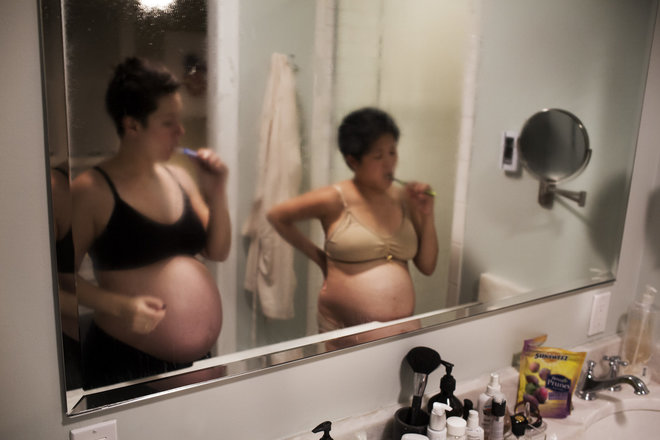 You don’t refer to your subjects as ‘your subject’ but you always mention their names. Why is that important to you?


For example, Alex I have been following for 5 years now. She has dealt with a heroin addiction, but I don’t refer to her as ‘an addict’ or as ‘my subject for this addiction story’ because her reality is more complex than that. So I refer to her by her name and explain who she is.

It takes more work to explain who somebody is than if I’d just refer to them as my subject. But I think that, when you’re a journalist or photographer, it’s easy to kind of get sucked into thinking of people as ‘my subjects’. These ‘subjects’ are a person! They have an identity outside of my documenting them. ‘My subject’ sounds weirdly possessive to me. I don’t want to refer to Maggie as ‘my subject’ because I didn’t create her.

You created the series.

I may create the series but Maggie exists with or without me. She’s somebody I document, she allows me to be there. She could in fact refer to me as her photographer.

So in 10 years’ time there will be like a hundred people you’re following?

I hope so! If you look at Mary Ellen Mark, she followed people for decades. If I would only be so lucky as to have a fraction of the fortitude as she in sticking with her stories, I would be very happy. I believe that sticking with a story can add depth to it. It’s especially important to consider this in an era where there is so much pressure on journalists to keep producing. For most people it’s [snaps her fingers]: ‘on to the next thing and on to the next thing’. I think that there’s value in following people and sticking with them and dedicating yourself to their stories.

What are the challenges of these long term projects of following the same person?

Finding new angles and taking pictures when no one necessarily cares anymore. That’s a challenge, but it shouldn’t be a real problem. Because, if you cared initially, before anybody paid attention, you shouldn’t have a problem continuing.

I tend to keep people close in my life, especially people who have helped me. You cannot take such people for granted. It can be really easy to forget things and people, but you have to try really hard not to do that. You should let them know that you appreciate the role they played in your life, no matter what.

So, a photographer should always be grateful?

Yes. The only way we can work is if people allow us in, so we’re particularly beholden to be grateful.

View more of Sara Lewkowicz’s work on her website.