A Different Colour of Family: An Interview with Giorgio Taraschi

Bangkok-based photographer Giorgio Taraschi (b. 1986, Italy) photographed the residents of a house of transgender sex workers in Indonesia, discovering there a familial community amidst uncanny bright colours. The owner, "Mami" Joyce, opened the house after watching many colleagues fall victim to AIDS and other fatal diseases, and now hosts 20 younger transgender sex workers. Taraschi's project was published by GUP in July 2013, and since then, went on to win 2nd prize for the PX3 award, and 1st prize at this year's Pride Photo Awards in the documentary section. He was in Amsterdam to collect his prize, and sat down for this interview to talk about Hotel Waria and what has happened with the work since the publication with GUP.

The name of the series, Hotel Waria, makes use of the Indonesian term for transgenders, 'waria', which is a combination the word for woman (wanita) and the word for man (pria). But, as far as the 'hotel' goes, is Mami's place actually a hotel, or is that a metaphor?

No, it's a metaphor. It's more like a shelter. I called the project Hotel Waria because I'm very much into movies, and it refers to the movie Hotel Rwanda, which was like a shelter – well, in that case, it actually was a proper hotel! But still, Mami's house is sheltering these people, protecting them from the threats of the Islamic Defenders Front.

Funny enough, most of the people of the Islamic Defenders Front go after the transgenders during the day, but during the night they become the customers. Some of them are even regular customers. They're like their boyfriends.

How did you get involved with the project?

I was working on a story together with a journalist, Alessandro Ursic, about the first retirement house for transgender elderly in Jakarta. We're talking about people around 50-60 years old. It was quite a big story because it was backed by the Catholic church of that district and the owner was a prominent human rights activist. What happened is that the article was basically done, but I told my friend that we needed a visual comparison, something related to the young ones, the ones who are still working. So, we got in touch with the same NGO that connected us with the retirement house, and one of them agreed to come with us to Taman Lawang, which is the business district of Jakarta. It was basically a background story – we needed a comparison. But when we got there, what we found was just absolutely amazing.

We walked in, and we see this place just calling for pictures, it demanded them. We had a talk with Mami, and we thought we already knew what we're going to find out – it's the same story with young sex workers anywhere – but instead, no, we were completely wrong, because she started talking about how she's encouraging all these young transgender people to follow their dreams. She's not pushing them to work as sex workers. They do pay rent, which is basically the income of a couple of hours on a Saturday night, but everything else is for them. She's encouraging them not to follow this career – if you want to call it that – for the rest of their lives, but to keep studying, keep doing what they want.

What happened was that the background story became the main one. Because it was so nice to see this familial environment.

One of the things that I find unique about this project is that even though these are sex workers, the project isn't really sexualized or concentrating on that aspect of their lives – it seems to relate to them as people. Were you also there while they were working?

Yes, we were there also while they were working. If you look at the whole series, that is, the pictures of the retirement house and the Hotel Waria pictures together, then there are also pictures of them working, them on the street, everybody with a lot of makeup on. But I didn't introduce these pictures to the Hotel Waria story because when we were editing, we realised that there was two completely different stories – it's a different colour palette, a different approach. The other story is more of a reportage, but Hotel Waria is a portrait story. That's why it's not sexualized. I removed the pictures of them working the streets because I only wanted to give this sense of community.

It might sound a bit presumptuous, but I think the reason why it won the Pride Photo award is that it doesn't show the transgender or the sex worker in the classic way. It doesn't really sexualize anything. Especially in Southeast Asia, sex is all around. It's everywhere. So, it's actually the last thing I would want to focus on. 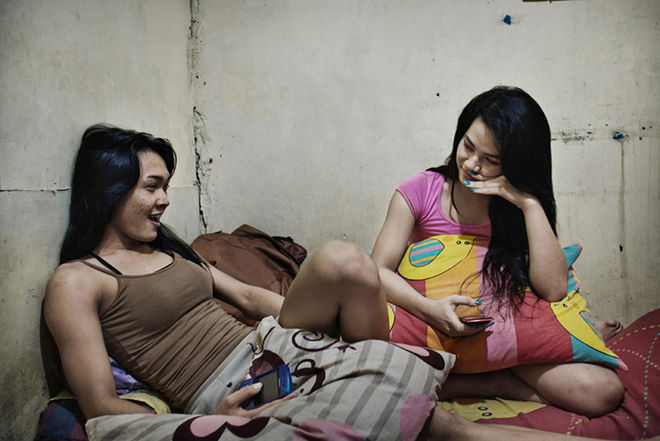 Considering there is so much photography of this overt sexuality, did the subjects ever pose for you, doing what they thought you wanted, or performing for the camera?

No, in fact, at the awards ceremony, they asked me about my favourite picture in the series – and it's the portrait with the green wall and the greenish blue contact lenses. And the reason why I always choose that one is that it looks like she's posing, but she wasn't. She was actually very shy. She didn't look at me at all the whole time. I was trying to break the ice with her friends who were in the room, but she didn't talk at all. Then, at a certain point, she just looked up, I don't know why – nobody called her or anything – she just looked into the light. She was really quite shy, so I wouldn't say she was a poser or a performer. That was really my favourite picture because it looks like I posed the person in that way, but I didn't.

The vibrant colours of the building add a lot to your story – what was it like to actually be in the space?

First of all, it was incredible because of the neon lights. Everything had this kind of blue wash, so you had really, really oversaturated colours, but with this cold tone above it, so it brightened up everything. There was a neon light in every room, and quite a strong one, so every room is perfectly lit by itself. I don't know why, but every room had a different colour, all oversaturated. It looked like it had just been painted – it was scratched and very old, but still it kept the saturation.

The pictures do look like there's been a lot of post-production, but honestly it didn't happen and I get tired of saying this. When I sent them to various magazines at the very beginning, and all they told me: “too much Photoshop". And I had to email them the RAW file, to show them that it wasn't. You had warm light coming from the outside, you had neon light in the room, a blue sparkling wall, a TV coming from the side – there is so much colour casting there, that you just need to put the contrast a little bit higher, that's it. 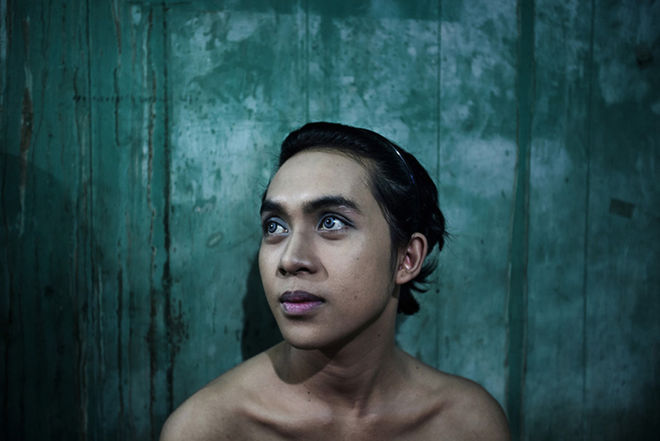 The subjects all appear quite comfortable the images. What was your process of gaining their trust?

Well, I smile a lot by nature, that's always helped.

Come on, seriously? You smile a lot, that's your answer?

Really, that's how it works! It's also somehow different because this was our plan-B. We didn't really plan everything. We had some background knowledge about the whole situation but we didn't have any expectations. One thing that helped for sure is that I wasn't working in the same room as my colleague; we were separated the whole time.

For sure I tend to listen a lot when the subject is talking – because you're not just taking pictures, you're actually telling a story, so what the subject says is as important as the pictures. Perhaps the fact that you're actually listening to them makes a difference, instead of just being there taking pictures – bambambam and out in two hours. No, we spent the whole night there.

It was quite hard at the beginning. They also asked for money at the beginning (which is ethically wrong, but in that kind of situation you end up re-thinking everything). I spent the first couple of hours just sitting with them, smiling. It wasn't even talking, nothing, just looking at them. Sometimes I light up a cigarette, offer a cigarette to everyone – and of course everyone comes and takes five each. That's just what happens: you sit in a corner at the beginning, and they talk to each other. Then they start waking up, because it's the night shift, and you just keep sitting, keep smiling, keep trying to communicate. After all, communication is 95% non-verbal. It's all about that. You smile, you show yourself as friendly.

How much time did you spend there?

We spent two full nights and a half, let's say. The first night we didn't really take that many pictures – maybe one. Also when they started putting on their makeup, which is like a half an hour process, I could have shot a lot more pictures than I did, but no… I just took my time.

Was there any difference in the girls before they put on their make-up and after?

When they were ready, they started to pay not so much attention anymore and it got -- especially on the second night -- a bit unpleasant. Some of them started to give the impression like, 'ok you've been here a lot, we let you into our rooms and everything, but now we're done'. It changes at the moment they're ready: customers are waiting.

You don't want to waste their time. It's the same with all sex workers – if you go there and start talking to them, you're making them lose clients. Time and clients. You need to have the decency to understand that you're talking about quite a delicate topic. It's their main income. You can agree or disagree, but if they don't want to be photographed at a certain moment, I completely respect that. That's part of the person, too. We're talking about people, a human being. If I force the picture, I'm faking. I'm lying.

You made a point of telling me earlier that GUP was the first publication to pick up your story and that felt like the starting point for the work – what happened after that?

Yes, I'm extremely glad that it all started in Amsterdam – you guys were the first ones to publish the work – and then it came back around, because now here I am to accept the award for Pride Photo!

After GUP, the story was sold to a couple of magazines in Asia, and then after that, some gay magazines in Canada, Germany and France. Basically everywhere except Italy, which was funny, that it was published all over the world but I couldn't get it published in my home country. This year, it was exhibited in Arles, it won the PX3. I got the news for that a few weeks before the Pride Photo. It's not only important for the fact that it's Amsterdam, but also because it won first prize in the documentary category for Pride Photo. It's wonderful because it couldn't have gotten any higher award than that, to be recognised as a documentary project and for an award strictly related to LGBT identity. So that made me very very proud. And it all started with you guys!

See more from Hotel Waria in our online portfolio.